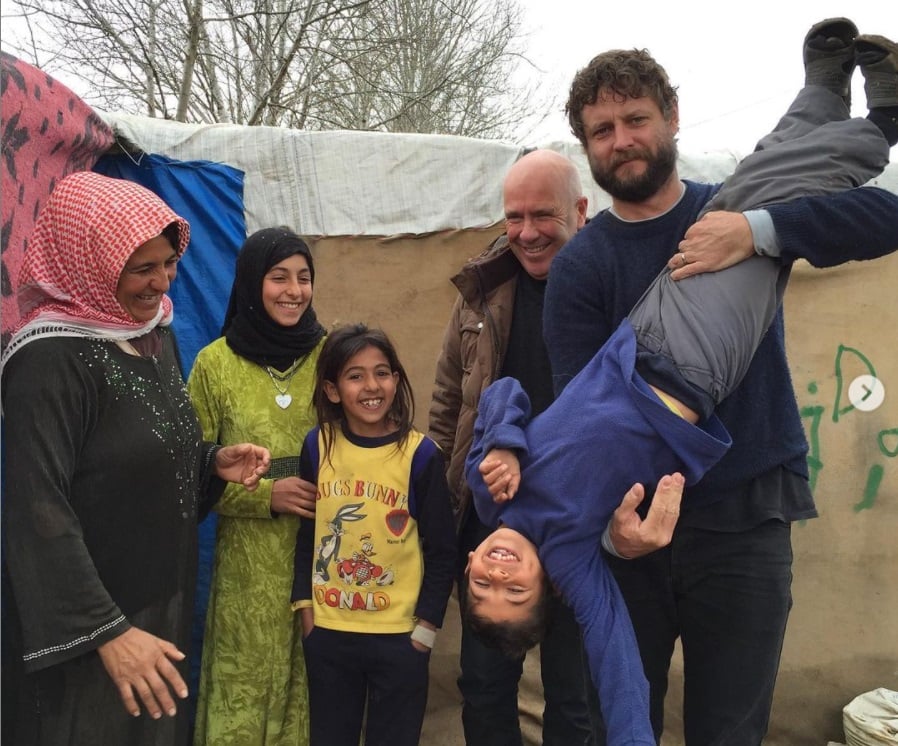 Artist Ben Quilty with author Richard Flanagan with an Afghan family in a refugee camp in 2016. Source: Ben Quilty.

A campaign by artist Ben Quilty to raise $30,000 to help people in Afghanistan has turned into a $4.5 million donation for the UNHCR thanks to support from Atlassian co-founders Mike Cannon-Brookes and Scott Farquhar.

Early last week, when Quilty’s fundraising campaign for the UNHCR, to help people in Taliban-controlled Kabul following the withdrawal of US troops, got underway, Cannon-Brookes and his wife Annie pledged up to $1 million in matching funds.

After that, Atlassian co-founder Scott Farquhar and his wife, Kim Jackson, founder of VC firm Skip Capital, decided to match the funding, along with Karen Wilson, chair of the Wilson Foundation, who pledged an additional $1 million on the condition that Quilty’s campaign hit $1 million.

Quilty, who won the Archibald Prize a decade ago for his portrait of fellow artist Margaret Olley, subsequently headed to Afghanistan in 2011 as an official war artist with the Australian Defence Force. He returned five years later with author Richard Flanagan to visit Afghan refugee camps in the Middle East and Europe as war in the country entered its 15th year.

As the scenes at Kabul airport unfolded last week, with people falling from the sky after clinging in vain to US transport planes flying out of the capital, Quilty decided to act and launched his fundraising campaign.

“Many of my veteran friends are desperate to get Afghan friends, interpreters and fixers out of Afghanistan. For veterans, my heart broke when Kabul fell. What was the mission for? I was told that Australia was in Afghanistan to liberate the people. And now, we have enslaved them all,” he wrote.

UNHCR are the people on the ground in Kabul today, providing food, water, shelter and protection. They are the organisation that needs all of our support. Donate to UNHCR. Your money will help Afghan people right now.”

With the support of the Atlassian co-founders inspiring people to hold them to their promise, the crowd-sourced momentum behind Quilty’s campaign saw it hit the magic $1 million mark.

Fellow artist Angus McDonald was among many artists and writers donating works for sale to contribute towards the campaign. The proceeds from the sale of his Archibald Prize portrait of Afghan-born Australian lawyer and writer Mariam Veiszadeh, for $62,000 to Katrina and Simon Holmes á Court tipped the fundraiser into seven figures, delivering a 3x ROI in much-needed funds.

We did it! One Million raised and with the help of @mcannonbrookes we quadrupled that to 4 mil with thanks to @WilsonFound and @scottfarkas . Keep donating! Sky is the limit right now for Afghanistan https://t.co/Me3CnX6gi8

Quilty said he was blown away blown away by the generosity donors, including the arts community.

“The money we have raised will provide tarpaulins, kitchen sets, blankets, food, shelter, water, sanitation kits, cash, mobile health care clinics, psychological care and diplomacy skills to be used on an unproven and dangerous new government. We need to continue to fund raise,” he said.

“I have opened it up. So many artists are about to donate and I’m so aware that many of you have very little to give. I’m so humbled. Let’s keep it going.”

More than 550,000 people are being cared for the UNHCR in Afghanistan.

$50 is enough to vaccinate refugees to prevent infection. $135 provides shelter for a family who’ve fled their home.

By Monday, Quilty’s initial campaign had raised $1.5 million. You can donate too, here.

It’s not the first time Cannon-Brookes and Farquhar have opened their deep pockets to help people in need.

Following the devastating bushfires of the summer of 2019-20, the duo donated $100,000 each towards actor Russell Crowe’s campaign to raise funds to more equipment for Rural Fire Service firefighters.