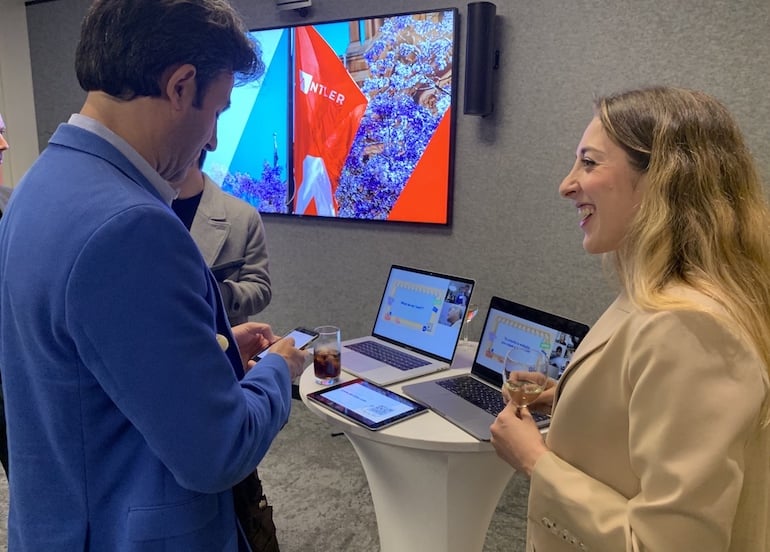 Nina Hooper (right), co-founder of Abrility speaks with an investor

Antler is known for breaking down the barriers of entrepreneurship and now, via a new initiative, the “Antler Angel Experience,” is also providing access to untapped early-stage funding opportunities.

Local investors and startup founders will know, Australia has an early-stage funding gap. It exists due to a market gaining in maturity and results in startups struggling to secure the initial runway they need to sustain to the point of reaching meaningful traction.

The younger market means that only in the last few years has it been able to create successful founders who are now able to reinvest into local startups, most notable being Atlassian’s co-founders, Mike Cannon-Brookes and Scott Farquhar who have established venture funds with Grok Ventures and Skip Capital.

However, also moving the dial is the recent Afterpay acquisition. This is meaningful as liquidity events such as this puts money back into the local VCs who initially backed them, and its founders and early employees.

These individuals are now able to use this unlocked wealth to bolster the Australian startup ecosystem as many now are not only in the financial position to start angel investing but also come with the lived experience of taking a company through to a significant exit.

For investors, access to good deal flow is crucial.

To address this Antler Australia has launched this new program and while not a new invention — AirTree, YC, and First Round have similar initiatives — is taking a slightly different approach in the way that these connections are built.

The Antler Angel Experience (AAE) is aimed at connecting aspiring and experienced investors to deal flow that they gain an intimate understanding of.

This process sees the investors connect with the founders and their businesses, building rapport and confidence over time leading to them being able to make a more robust investment decision.

How is it different?

The Antler Angel Experience was built on the hypothesis that investors are more likely to write cheques into our companies if they go through the due diligence process and bear witness to the investment rationale.

With this in mind, we designed a three-tiered program aimed at unlocking in-depth access to Antler deal flow at an earlier stage.

Similar programs educate investors in term sheet mechanics and other VC fundamentals, and while this is a component of the AAE, we also give participating angels behind-the-scenes access to company formation, lifting the lid on Antler’s investment process.

After a successful pilot earlier this year, the AAE is now running its second cohort and is receiving praise amongst its participants for its unique approach. One investor said:

“It is rare of an investment firm to provide such transparency into their process and involve its investors, which are likely to produce synergies.”

Thirty-five angels have joined this cohort with varying levels of experience, but as a group, they have made 177 investments. This builds on the last cohort which had 12 participants with 62 investments to date.

The high engagement, level of transparency and access, is proving to be successful as collectively across the two cohorts this has led to ~$500k in investments being made in less than five months.

The program runs in parallel with the Pre-Launch cohort and requires around an hour commitment per week to allow for angels’ schedules outside of their investment activities.

There are three core components of the Angel Experience: Access, Network, and Exploration.

Here, participants see how Antler teams are formed through engaging in the design sprints that happen in the initial phase of our Pre-Launch cohort. They also have the option to host their own Office Hours guiding founders on GTM or business modeling, listen to Antler coaching calibration sessions, and have access to the all-important Investment Committee where Antler’s funding decisions are made.

This provides the angels with end-to-end insights into how companies are formed, shaped through coaching, and reasons why an investment was made or declined.

Angels can therefore see how founders operate over a meaningful period of time and track their trajectory. They can also make informed decisions having heard from the team’s business coach Antler’s investment rationale.

An early-stage startup’s value is heavily weighted on the strength and capability of the founding team. It’s for this reason that it’s critical for angels to get to know founders, as investments at this stage are often based on team formation and the founders themselves.

An angel can be inspired by a founder for many reasons. They can be convinced by their commitment and conviction to solve the problem, or perhaps spot a unique industry insight that unlocks an unfair advantage.

In some cases, an angel will choose a founder because they are moved by how they see the world and, if right, could change customer behaviour to unlock a new segment. Examples of this are Airbnb and Uber that revolutionised the way we find accommodation and travel.

The network component of the Antler Angel Experience is twofold. Firstly, it enables angels to form relationships with founders across the Antler portfolio, and secondly, it introduces them to fellow angels in the experience.

The process of getting to know the founders is facilitated by the access they have to the Pre-Launch cohort. It’s also an initiative to enable them to get to know the broader portfolio, through closed events such as invitation-only pitching sessions, roundtable discussions, and fun socialising activities such as trivia and poker.

Meanwhile, the AAE participants also get the opportunity to meet one another through candid sharing of insights and interests on certain founders or companies they are attracted to. One investor said:

“It has been super interesting to see not only Antler, the founders but also how other Angels see the world”

These open discussions are held during the community events and in the group’s Slack workspace.

The educational component of the experience shows the angels the mechanics of the Antler model and the typical pathway a company goes through before investment, delivered via pre-recorded masterclasses.

While not intended to turn someone without experience into an angel investor, these masterclasses help to reveal the inner workings of a venture capitalist’s considerations before making an early-stage investment. Examples of these sessions are What Makes a Great Founder and The Seed Fundraising Journey.

If you would like to learn more about the AAE or you, or an angel investor you know, would be interested in joining our next cohort, please read the following resources below:

* Adele Moynihan is VP, Origination and Program, at Antler Australia. Antler is a global early-stage VC enabling and investing in exceptional people building the defining companies of tomorrow.

Learn more about the platform here.

Adele is vice president of Origination and Program at Antler Australia.