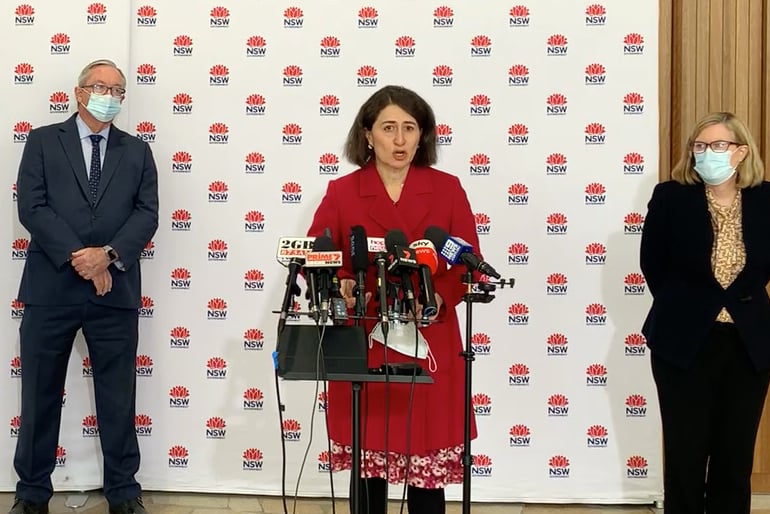 Sydney’s COVID-19 outbreak has been declared a national emergency and residents more suburbs in the capital’s south-west will be banned from leaving their region under stricter lockdown laws.

People who live in the Cumberland and Blacktown local government areas (LGAs) will also be added to the list of workers who are not allowed to leave their communities unless they are on the authorised list of workers.

From 12.01am today, a person who lives in the Canterbury-Bankstown LGA can only work in health or aged care outside of the LGA if they have been tested for COVID-19 in the previous 72 hours.

While NSW premier Gladys Berejiklian did not announce an extension of the citywide lockdown restrictions, she hinted they’re unlikely to lift next week on July 30 as planned, looking as far down the track as October as attention turns to vaccinating the population in a bid to slow the impact of the Delta strain.

“There is no doubt that the numbers are not going in the direction we were hoping they would at this stage. It is fairly apparent that we will not be close to zero next Friday,” the Premier said.

She called on the federal government to refocus the national vaccination strategy.

“The vaccines are working. That is excellent news. We know the vaccines work in stopping high rates of transmission, which means stopping people spreading it as much as they otherwise would, stopping people from getting very sick,” she said.

“The key to our living freely and as openly as possible, is getting more jabs in arms and containing the virus, and not allowing it to spread further, which is why in particular we have extended stay-at-home orders for particular workers in those Cumberland and Blacktown local government areas.”

The number of infections increased on Friday to 136 locally to 8pm Thursday – 12 more than the previous 24 hours.

Contact tracers have linked 77 cases to a known case or cluster – 65 are household contacts and 12 are close contacts – and the source of infection for 59 cases is under investigation.

A man aged 89 has died from the virus, the sixth death in the current outbreak.

“What I am recommending strongly is that our vaccination effort are refocused on those affected LGA’s. Every day people from those LGA’s have to go out to work, to keep our city going,” she said.

“They are doing critical food production, critical work, to keep society functioning, and we are seeing cases introduced the virus into various workplaces. We are also seeing a significant household transmission, and it has been very challenging to interrupt those transmission chains.”

Dr Chant wants all vaccine initiatives refocused to south-western Sydney, and Western Sydney, particularly the affected local government areas, with a ramp up of the Pfizer vaccine for the younger working population.

“Under 40s would not have been routinely eligible for vaccination, in terms of Pfizer. And what I’ve recommended to government is we urgently do mass vaccination of those workers to stem the transmission risk. We know the vaccines do that because they reduce the risk. If you’re vaccinated, even one dose, it reduces your risk of onward transmission.”

Dr Chant also went into bat for the AstraZeneca vaccine saying any risks “are infinitesimally small compared to the benefits” and she had recommended it to her husband and her mother-in-law.

“Can I just be very clear that we need to correct the mythology about AstraZeneca,” she said.

“In the context of the Delta threat, I just cannot understand why people would not be taking the opportunity to go out and get AstraZeneca in droves.”

Premier Berejiklian said there was plenty of AstraZeneca available.

“So, if you’re over 40 there is no reason today that you should not be getting the AstraZeneca,” she said.

The Premier said the focus of the government will be getting at least one vaccine into Sydneysiders, especially in the southwest, making a plea for more Pfizer doses.

“We have a micro-plan for how we will get not only more doses of AstraZeneca in arms, but we also have to acknowledge that that is a very young population in those communities, and we need at least more first doses of Pfizer,” she said.

“We need a refocus of additional doses to make sure as many people in the community with at least the first dose as possible because even with the first dose, it reduces your chances of spreading it to as many people as we are seeing it occur now. That is our priority: first jabs.”

Around the nation, the infection rates were more promising

Victoria had 14 new cases, but at least 10 were in isolation for all of the infectious period and that figure may be higher.

There are 14 new locally-acquired COVID-19 cases which are all linked to the current outbreaks. 10 of the 14 cases were in quarantine throughout their entire infectious period with 1 of the other 4 cases still to be interviewed. 14,302 vaccine doses were administered yesterday.

South Australia had one new local case, and the state’s current lockdown is likely to end next Tuesday after a week.

“All the early signs are very positive that this will just be a seven-day lockdown,” Premier Steven Marshall said.

Queensland had one new local case involving a Qantas flight attendant who travelled on six flights, including from Brisbane to Longreach, Gladstone and Harvey Bay between July 11 and 12.

“For the next seven days there will be managed return flights for New Zealanders from all states and territories that will require proof of a negative pre-departure test,” Ardern said.

The NSW government is now looking at a roadmap to ease restrictions spanning the next three months – through August, September and October, as well as ramping up support for the communities affected.

“Our challenge is to live as freely and safely as possible until we get enough vaccines in arms,” she said.

“According to the federal vaccination rollout, by the end of October, we’ll be at a stage where much more of our population will be vaccinated and we’ll be able to live much more freely beyond that point. But we have to provide a roadmap to our citizens as how best we can live freely, but also as openly as possible.”

The Premier said that they will look to open up and ease restrictions where possible as quickly as practical.

“We will have a clearer view next week on what August, September and October will look like for our citizens around the state and our strategy remains obviously to keep the virus out of the regions and allow the regions to continue doing what they’re doing,” she said.

“Our strategy also involves having a much more targeted approach.”

Previous article Giant Leap’s Small Steps: the social innovation we need to address climate change
Next article LaunchVic is on the hunt for a fund manager for its $120 million startup fund
Via Covid-19
Tags