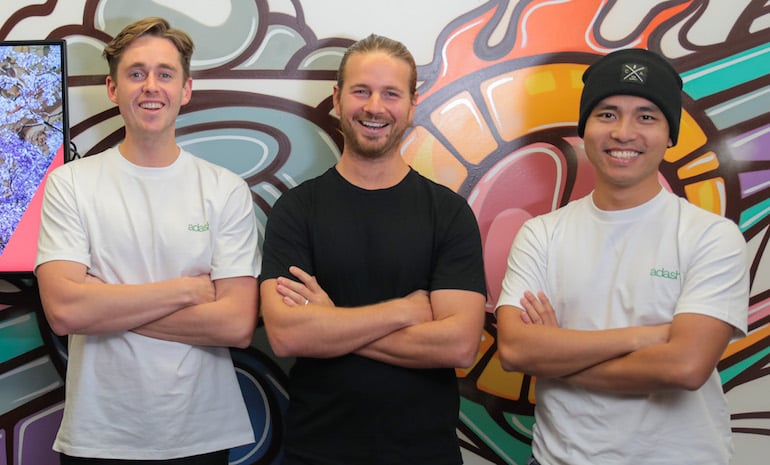 adash's co-founders Dan Carew, Giles Russel and The Dung An

If you’re a foodie, or just love to cook, then you’d understand just how difficult it is to find great recipes.

In an era of mass content creation, most of the good resources you’re looking for, especially surrounding food, are lost amongst many of the large recipe websites that choose quantity over quality.

It was this need for great recipes that led to the creation of adash, a content platform that serves both food lovers and food creators.

adash is the brainchild of three co-founders, who have each seen the various issues with the current food content creation model.

CCO Dan Carew is fructose intolerant and struggles to find good recipes, CEO Giles Russel runs a number of restaurants in the US and CTO The Dung An’s wife is a Youtube content creator.

Carew believes this understanding of the difficulty faced by both foodies and food creators can be the catalyst for a better experience for all involved.

“At adash we’re connecting food content creators to their biggest fans. It’s a two-sided marketplace with a two-sided problem,” he said.

Carew adds that to cook using your phone is also a battle.

“If the units are in ounces, but you only understand grams then you go to a recipe that’s in ounces, you’ll pretty much straight away get back out of it,” he said.

“If you’re watching video recipes and you’ve got dirty fingers you can’t go on and check the ingredients or start a timer whilst cooking. So actually consuming recipes using your phone is a real pain.”

adash is also looking to help food content creators grow a fair and reliable revenue stream and connect with their biggest fans through the content they put so much effort into making.

“For food content creators to actually build an audience and to make a living doing what they love out of that audience is a nightmare. We’ve spoken to over 75 now and they’ve all talked about how hard it is to actually build a following and then actually be able to build a fair and reliable revenue stream from that,”  Carew.

“At the moment they’re really dependent on ad revenue and there’s now almost one in two people who have ad blockers installed on their computers and devices, which means that people are coming on to view their content and using it, but they’re not actually getting any reward for it.”

Both users and creators have been incredibly positive about adash to this point in time, however, the toughest part is getting their foot in the door with creators.

“When we can get a conversation with a content creator, they’re all for it. They absolutely love the platform and the motivations of adash,” says Carew.

“We’re able to leverage Giles’s existing network as he’s been in the industry for almost 10 years so he knows a lot of people already so that was incredibly helpful for us in terms of opening some doors. Some big name creators like Guy Turland and Tom Walton are already onboard which the team are very excited about.

“As it has always been in any sales that I’ve ever done, actually getting that first conversation with people, especially the content creators, is the toughest part. But once we can actually get them on the phone then they’re all for it. They love it.”

While adash is growing rapidly and increasing its users and creators by the day, the team have some lofty goals ahead.

“There’s a lot of different avenues and vehicles within home cooking and we want adash to be the one-stop-shop for that,” Carew said.

“Our goal is that you’ll never have to google a recipe again. Recipes will be curated for you by your favourite food content creators based on your preferences and diet. If you want to then go and order your ingredients for that particular recipe or a series of recipes, if you’ve done the meal planning, then you’ll be able to order your groceries online too.”

Care said that as smart kitchens evolve and people can do everything from check for ingredients in the fridge, preheath the oven and order groceries, they’re want to make it all happen through the adash app.

“The dream at the moment is if you’re listening to music, you’re probably going to Spotify. If you want to do some meditation, you’ll probably go to HeadSpace or Calm,” he said.

“If you want to watch movies you might go to Netflix. If people want to cook then they’ll go to adash and that’s what we’re working towards.”