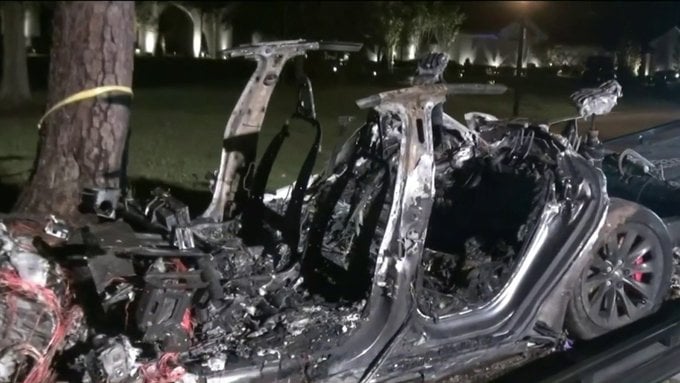 The crashed, burnt out Tesla in Texas. Image: KPRC 2

Texan police say there was no one in the driver’s seat of a Tesla when it crashed near Houston on the weekend, killing two people after it crashed into a tree and caught fire.

Local TV station KPRC 2 spoke to the brother-in-law of the car’s deceased owner  who was found in the back seat of the 2019 Model 2. The accident happened not far from his home. The men are believed to be aged 59 and 69.

Authorities spent four hours trying to extinguish the fire in the vehicle, using 145,000 litres of water, because the battery kept reigniting, even calling Tesla for advice.

Two men killed after Tesla that may have been in autonomous driving or self driving mode didn’t adhere to a curve, slammed into a tree then burst into flames in the Woodlands, officials say. Firefighters say they had to call Tesla to figure out how to oust the blaze. @KPRC2 pic.twitter.com/nmhDxKeTHT

The cause of the crash is under investigation, but the car was believed to be travelling at high speed and failed to make a turn. It’s not yet known if the Autopilot driver assist system was activated.

The US National Highway Traffic Safety Administration is investigating 23 Autopilot-related crashes amid 27 in total. One of the most recent crashes saw a Tesla hit a parked cop car.

Tesla did not respond to US media enquiries following the Texas crash, but with two people dead, what did the car company’s tecknoking and chief Dogecoin spruiker have to say?

Musk has resisted pressure to increase oversight of the use of Autopilot, saying in a 2018 investor call that: “When there is a serious accident it is almost always, in fact maybe always, the case that it is an experienced user, and the issue is more one of complacency. They just get too used to it.”

Meanwhile US retail giant Walmart is a key backer in a US$2.75 billion raised for self-driving taxi startup Cruise, Forbes reports.

Former GM President Dan Ammann is Cruise’s CEO and the San Francisco-based venture is now worth more than US$30 billion. Honda, Softbank, Microsoft and General Motors.

Cruise initially announced a $2bn round in January, before adding another $750m, with Walmart doubling down on the project. The robotaxi service will launch in San Francisco, but Cruise has also announced it’s setting up a commercial ride service in Dubai in 2023 amid plans to build to 4,000 electric, autonomous vehicles by the end of the decade.

Walmart CEO John Furner said: “This investment is a marker for us. It shows our commitment to bringing the benefit of self-driving cars to our customers and business.”

The two companies have been collaborating on a delivery pilot program in Arizona for the last six months.

There’s a fascinating piece on US VC Andreessen Horowitz on The Information ($) charting the company’s recent success thanks to its bet on Coinbase, which listed last week with a valuation four times higher than the market cap of the NASDAQ it floated on. The VC’s stake in Coinbase is believed to be worth US$10 billion, which the Information says is more than half the capital its raised in its 12-year history.

“The performance of Andreessen Horowitz’s investments in tech startups were average, despite the firm’s outsize public profile. But its partners had placed bigger bets on cryptocurrencies than almost anyone else, and they did so during moments when most investors had soured on the field,” Kate Clark and Amir Efrati write.

But the investment firm also other crypto assets now worth billions of dollars, an insider told The Information, and now its ramping up its investment in startups, with a focus on software. More here.

No room at Airbnb

Airbnb CEO Brian Chesky believes the platform will need to increase the number of hosts on the platform by at least 25% if the home-share site is going to meet post-covid demand,.

Speaking to CNBC’s TechCheck Chesky said he expects the rebound in travel to be “unlike anything we’ve ever seen” and that “to meet the demand over the coming years, we’re going to need millions more hosts”.

Chesky said Airbnb isn’t likely to offer “a lot of incentives” to bring new hosts on board since there’s already a huge demand for service.

But unlike Uber, which is spending US$250 million in the USA to entice drivers back to the platform because demand, including on the deliver side, is outstripping both driver and courier availability, the Airbnb boss won’t be offering incentives beyond a nostalgic ad campaign.

“I think that all we have to do is just continue to tell our story of Airbnb, and the benefits of hosting,” Chesky told TechCheck.

The crypto market has fallen nearly 8% in the last 24 hours with Bitcoin falling 3% and now down 6.4% for the week to sit at around A$73,611 according to Coinbase.

But the standout performer for the week is Dogecoin, which has gone from the 11th biggest cryptocurrency by market cap to 6th, having gained another 17% in the last 24 hrs to sit at A$0.42 cents. The joke currency is now up more than 330% for the week.

Those moves are nothing compared to a flash crash yesterday that wiped 12% off Bitcoin’s price in 15 minutes during lunchtime Sunday. An estimated one million derivatives traders had their positions liquidated as a result, in a A$13 billion wipeout.

Proptech Archistar, which uses AI to maximise capacity in architectural design has raised $6m in a series B backed by Skip Capital and AirTree Ventures to fund its international expansion.