Don’t forget to tune in for the Startup Daily show on Ausbiz.com.au  every weekday, 2-2.45pm. Our guests today include Tasmanian whisky producer Bill Lark, the godfather of Australian distilling.

Watch online, download the ausbiz app or via 7Plus.

Remember this work, which we featured last week, ahead of Christie’s auctioning it as a non-fungible token (NFT).

Well it sold for US$69.4 million this morning, which Christie’s says the sale price puts Beeple, aka Mike Winkelmann, among “the top three most valuable living artists.”

The artist himself summed up the situation best:

Meanwhile, Pussy Riot founder, Russian conceptual artist and political activist, Nadya Tolokonnikova, is selling her new single “Panic Attack” (see image from the video clip above) as a series of four Non-Fungible Tokens (NFTs) for collectors to purchase on Foundation this Saturday, March 13.

Proceeds will go to Pussy Riot’s art and the shelter for victims of domestic violence in Russia.

Tolokonnikova says she’s exploring NFTs as a way to give fans a piece of her work while benefiting a cause that she holds close.

Gaming platform Roblox, which has nearly 33 million daily uses, hit the NYSE with its IPO yesterday and the shares jumped 15% on debut. That values the business at around US$44 billion (A$57bn). That’s 10x the valuation just 12 months ago.

The site is a massive hit among teenage girls – around half the US users are under 16 – who like its collaborative model, which is based on user-generated games. You’ll find around 18 million options on there. The games are free to play, but have in-game purchase options. The company takes a 30% clip of any sales with the remaining 70% going to the developers, with more than 1500 earning more than US$10,000, including an elite group of 300 raking in US$100,000.

Cybercrime Squad detectives in Sydney have charged another six people as part of an investigation into a criminal syndicate accused of laundering money using cryptocurrency.

Strike Force Curns first arrested a 30-year-old man in February, seizing $1 million in cash during a vehicle stop at Strathfield. He was charged with 24 offences.

Another six people – a man and five women – were arrested in Sydney on Wednesday. Police searched units at Newington and Strathfield, seizing mobile phones, laptops and tablets as well as cash and jewellery.

Police will allege the woman was involved in the cryptocurrency money laundering syndicate and dealt with proceeds of crime to the value of $3 million.

All five women were granted bail to appear at Central Local Court on April 19.

Japenet’s fund will look to invest in startups in the US, Israel, Europe and Asia to support its Nagasaki ‘Stadium City’ project, opening in 2024, and including a sports stadium, business offices, retail stores, hotels, and live event arenas.

Startups in child education, elder care, hospitality, and other services are on the hit list Japanet CEO Akito Takata said.

Pegasus will go looking for startups and connect them with Japanet and Pegasus’ extensive network of corporate partners.

We liked this chart from the team at CB Insights. They asked readers last week, which of the following four fintech companies they’d put $100k into on the proviso they they had to offload the stock on the day of the IPO.

And the winner is Stripe. 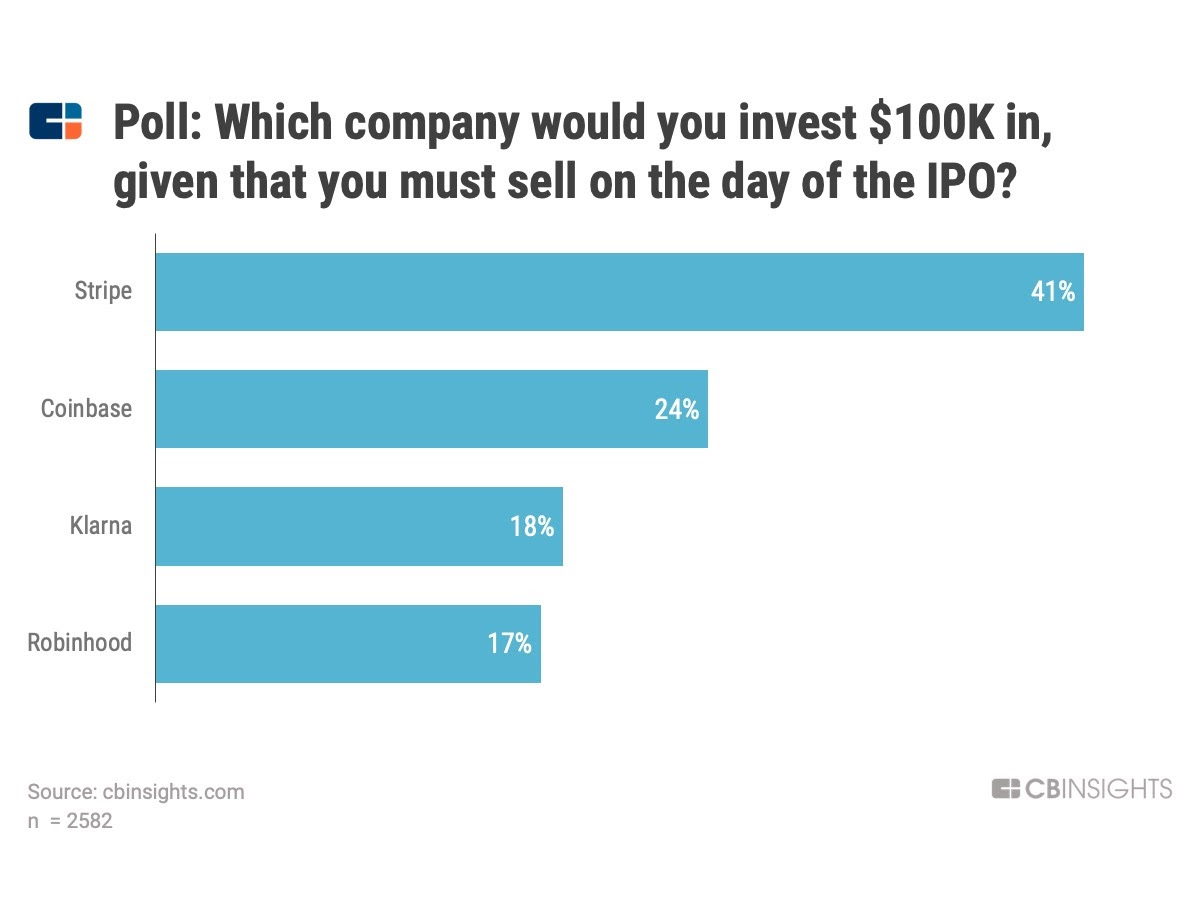 People in the area of interest will receive the alerts, which feature a brief description and information on how to report any sighting. Police say it will only be used when they hold grave concerns for the missing person, for example, someone with dementia wandering from their homes, children with disabilities separated from family or carers, and young people who go missing in large crowds.

The system was first put in place by states and territories following the 2009 Victorian Black Saturday bushfires to send out alerts in the event of an emerging emergency.

I want every little girl — every child, really — out there to know this is what a venture-backed CEO negotiating for tens of million of dollars looks like. pic.twitter.com/fRCJOIHmMA