The charts that say it all about tech stocks in 2020

The All Tech Index was the standout performer on the ASX in 2020. Chart: ASX

2020 was a good year for ASX tech stocks

The S&P/ASX All Tech Index (ASX: XTX) is proof. See the chart above – it’s the green linen and even beat the US Nasdaq (light blue line.

The index launched in late February last year, just before Covid-19 hammered the economy – and within four weeks, stocks across the board would plunge to all-time lows for the year.

Then began the comeback as tech became central to how firms operated during lockdown. One of the best known in that rally was Afterpay, which fell below $9 a share and now percolates along above $140.

The index is rebalanced quarterly and when it launched, New Zealand-born Xero topped the list, followed by Computershare and Afterpay. At the December rebalance, Afterpay was well and truly top dog, although Xero has also continued to perform strongly.

When it kicked off 11 months ago, the initial ATI had 46 list companies with a combined market cap of $100 billion.

By September’s rebalance, the ATI had grown to encompass 58 companies, and had added $33 billion in value in the three months to September. Less than a year later, there are now 69 companies on the S&P/ASX All Technology Index (XTX) with a total market cap of more than $170 billion.

How come it keeps getting bigger? Well, to make the cut, an ASX-listed company needs a market cap of more than $120 million, with more than $120,000 of shares traded daily (over a 3-month period), among other criteria, including 30% of shares being available for trade.

In the December quarter, the number of listed “unicorns” (worth more than $1bn) had grown from 38 to 40.

This chart from S&P shows the incredible performance of tech stocks compared with the S&P/ASX300 over the last six years – look at how they took off, following the March 2020 crash to really outperform the rest of the market.

Investing in the XTX in 2020 would have delivered you returns of around 39%. Not bad.

Finally, here’s the ASX’s round up of the All Tech Index in December: 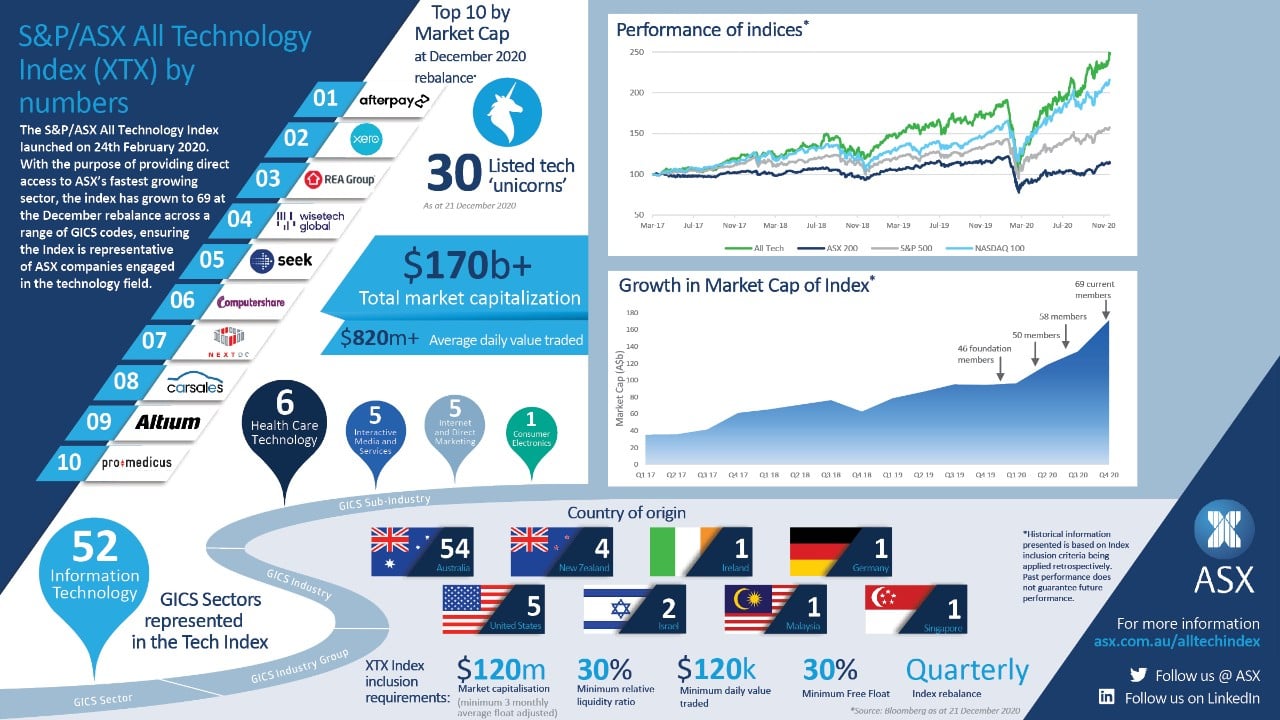 Previous article Your 90-second guide to the day in tech
Next article Crowd-sourced funding held its ground in 2020, and women are leading the way
Via ASX
Tags All Tech IndexASX