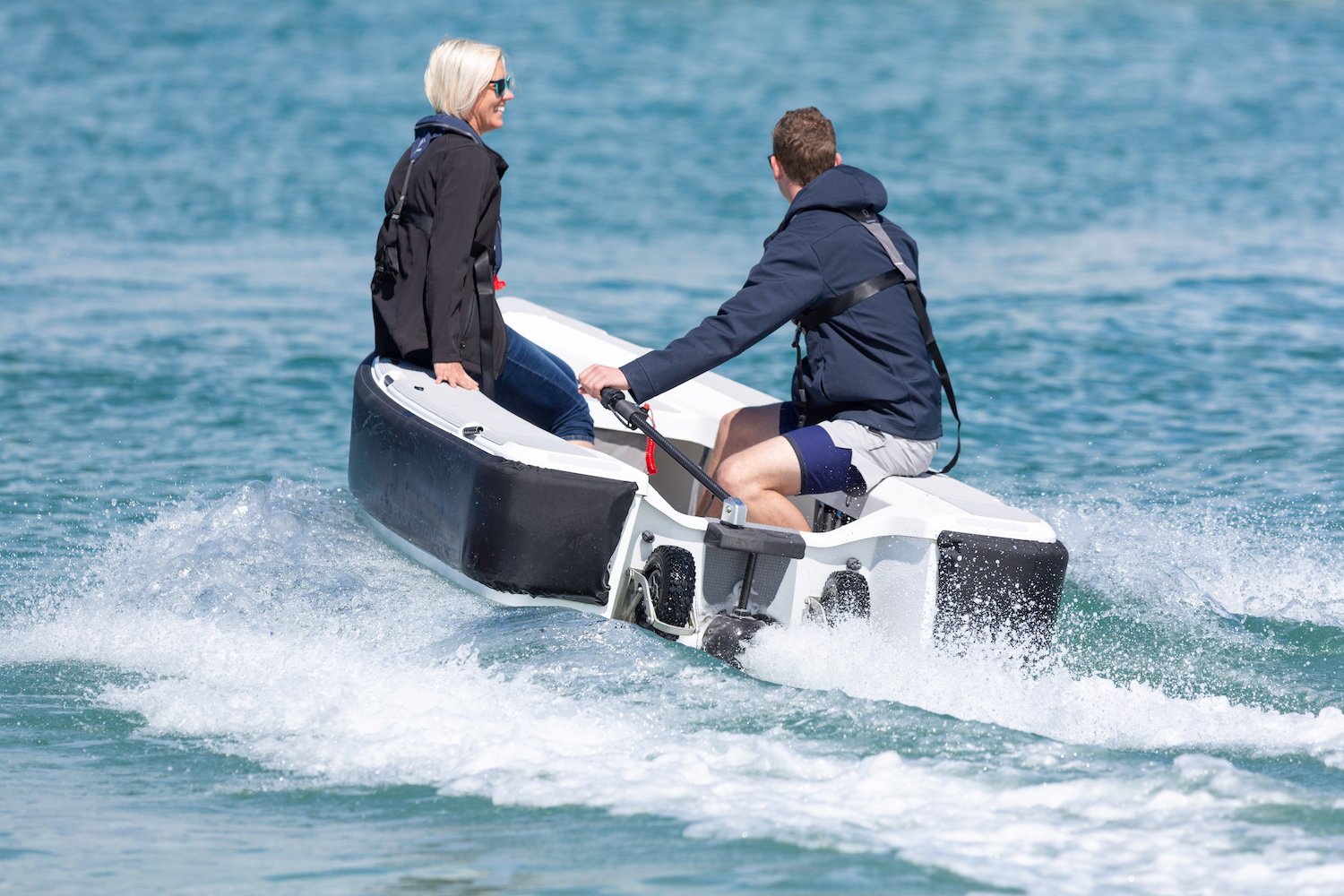 The ZeroJet outboard in action

New Zealand engineering startup ZeroJet is hoping to transform the boating industry by replacing outboards in a five year plan that would be like taking 1.5 million cars off the road.

The Auckland-based company, founded in 2015 by Neil Mans and Bex Rempel, built the world’s fastest and lightest electric jet boat, with a top speed of 70kmh and has now turned its attention to creating an electric jet propulsion system for Rigid Inflatables Boats (RIBs) and tenders.

ZeroJet’s propulsion system is half the weight of a traditional outboard motor, creating a faster and lighter boat. The company’s first MVP, built in 2019, was applied to a 3m-long tender that weighed just 70kg, with a top speed of 25 knots.

ZeroJet is the culmination of five years of development . The pair originally founded Voltaic Jetboards in 2016 and spent more than two years developing high-performance electric jetboards. They created the world’s fastest and smallest jetboard with tiny electric jets that could produce over 140kg of thrust, before turning their focus to boats and the 350,000 outboards (under 30hp) sold annually. Next year they plan to build a propulsion system for boats up to six metres.

Neil Mans said the marine industry was lagging behind when it came environmental innovation, despite the fact that outboards create more pollution than cars.

“If you run a new 5 HP four-stroke outboard for one hour, you produce the same amount of nitrogen oxide and hydrocarbon pollution as if you were driving 38 new cars at 95kmh for the same length of time,” he said.

“We use a highly efficient motor, about the size of half a loaf of bread, which means lighter, faster boats. Every boat builder we’ve spoken to and consulted with has jumped at the idea, giving us the confidence to look to scale globally in 2021, which would enable us to make even more of an impact in our total addressable market — 95% of which currently relies on petrol or diesel.”

Mans said that while electric vehicles have come a long way, the technology gap that remains in boating offers incredible potential.

While electric engine technology is making significant progress in motor vehicles, led by companies such as Tesla, there is a gap in the

“The automotive industry uses sophisticated methods to reduce pollutants, such as exhaust gas recirculation and catalytic converters. The outboards currently on the market do not have any comparable systems, even new ones,” he said.

“This is why the level of harmful nitrogen oxide and hydrocarbon emissions is dramatically higher than cars. Though there are far fewer outboards than cars, their pollution is substantially out of proportion”.

ZeroJet’s goal is to replace 10,000 internal combustion outboards with electric propulsion within five years, which would be equal to taking 1.5 million cars off the road.

“There’s been a very positive response to sales here in NZ so far and we are excited to expand upon the momentum,” he said.

“Our eyes are on Europe, which is currently leading the way in terms of regulations to support more environmentally-friendly marine technology.”

ZeroJet is the duo’s second venture, having previously opened the world’s first jet board rental business in Perth, Western Australia.