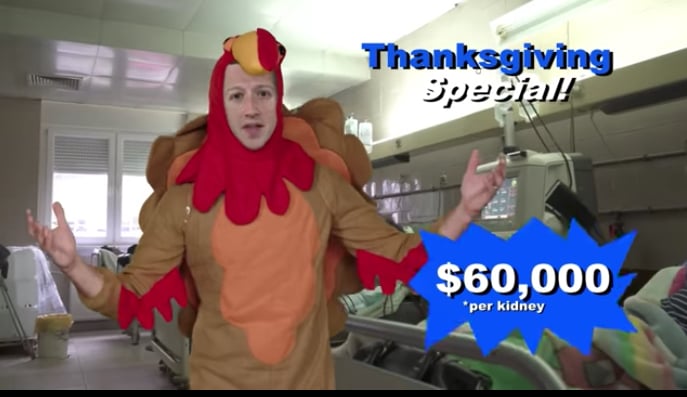 The Cheyenne dialysis spruiker on the deepfake satire Sassy Justice. Image: Sassy Justice
Welcome to Ignition Lane’s Weekly Wrap, where they cut through the noise to bring you their favourite insights from the technology and startup world.

Redefining the unicorn: $1B annual revenue

Joining the ranks of Dropbox, Shopify, Workday, Atlassian and Twilio (to name a few), this week Zendesk announced it had crossed the $1 billion annual revenue run rate milestone in Q3 (not to be confused with the other ARR – annual recurring revenue).

Forget billion dollar valuations. Billion dollar annual revenue is where it’s at. That should become the new definition of ‘Unicorn’.

Zendesk is another reminder that there’s no such thing as “overnight success”.

The startup was co-founded by three friends (the founder trifecta: an engineer, a designer and a businessperson) looking to break free from the corporate shackles. They spotted an opportunity in an underserved, ‘boring’ market: customer service software. The SaaS product launched from Copenhagen in 2007 and had paying customers within a month.

The team struggled to raise capital in Denmark, which had a non-existent startup ecosystem at the time. After several months of bootstrapping, they were able to secure a $500k Seed round from Berlin-based angel investor Christoph Janz. Janz then cofounded Point Nine Capital (also an investor in Vend, Typeform, Unbounce), which coincidentally launched a new €99,999,999 fund last month.

Zendesk quickly acquired more than 1,000 early customers, mainly through word-of-mouth recommendations from people who were won over by Zendesk’s clean design.

One of those early customers was Twitter. Thanks to its size and demands, Twitter helped test the limits of the early Zendesk product. It also proved to be an invaluable logo to flash about to prospects and investors.

By late 2009, revenue was steadily flowing in the door and big name Sand Hill VCs began to take note.

After moving to San Francisco, Zendesk went on to raise $85 million from Benchmark, Redpoint and Matrix Partners from 2009 to 2012. These are CEO, Mikkel Svane’s wise words on raising capital from his book, Startupland:

There is a vast spectrum of investors. Professional investors are extremely aware of the fact that they will be successful only if everyone else is successful. Great investors have unique relationships with founders, and they are dedicated to growing the company in the right way. Mediocre and bad investors work around founders and the company ends in disaster.

Eventually Zendesk hit ‘unicorn’ status ($1 billion valuation) after a successful IPO in 2014. In that year, Zendesk’s revenue was $127 million (against a $67 million loss). Svane explains this was just the start:

There’s a fundamental thing about going public: it can’t be like an end game. You go public to start next chapter of company’s life.

From there it continued to grow 30%-40% year-on-year, continually beating analyst expectations.

Today, after 13 years of hard work, Zendesk has more than 160,000 paying customers in 150 countries, who (at the current run rate) bring in $1 billion in annual revenue. An incredible milestone.

Thank you team @Zendesk and all customers for a strong Q3/20. We reached $1B revenue run rate and guided to FY $1B. A journey we started in 2016. Big milestone in the shadow of a pandemic. Stay safe. Wear your mask. Billion. Full shareholder letter here: https://t.co/Fcj8wEEm5i pic.twitter.com/QAHzww5jz6

It is quarterly results reporting season for public tech companies. We’ve trawled through the headlines so you don’t have to. Here’s what we spied (all USD):

“Link in bio” Linktree is on fiiiiire. It is currently adding more than 28,000 new users per day, including celebrities Selena Gomez and Dua Lipa, and brand big guns HBO and Red Bull. This week the team closed a US$10.7 million Series A led by AirTree and Insight Partners alongside strategic investors including Twenty Minute VC’s Harry Stebbings, Patreon CTO Sam Yam and Culture Amp CTO Doug English.

Airwallex, Athena Home Loans, Brighte and Wisr were big winners at the 2020 Finnies. Airwallex took out the top prize, Fintech Organisation of the Year, along with three other awards.

Around the world (all in USD)

Stripe released Stripe Climate, a new tool that enables its customers to automatically divert a portion of any revenue flowing through the platform to carbon reduction companies. Adding another notch to its belt of stickiness-inducing ancillary products. If you missed our piece on Stripe and its long-term game, read here.

Substack (the tool we use to write and distribute this Weekly Wrap) is one of the beta customers for Stripe Climate. Its cofounder and CEO explained why the tool is appealing:

We want to help show the way to a better future—and better yet, we want to give all Substack writers the opportunity to join us. Stripe’s climate initiative is a gift because it removes all barriers to positive action.

More semiconductor industry mega deals. Advanced Micro Devices is buying Xilinx for $35 billion. The deal could help AMD chip away at more of the data centre market, competing with rivals, Intel and Nvidia.

For those who have lost track, the semi industry is shrinking faster than Moore's Law in 2020:

European venture capital activity rose in Q3 2020 to €10.6 billion according to a PitchBook report. By comparison, U.S.-based startups raised around about €31.5 billion during the same period. Europe is on track to set a new annual VC investment record. That’s good news. But the bad news is that proportionately less capital is heading to new startups/first-time raisers.

A cautionary tale – the destruction bad investors can cause. Co-founder and former CEO of investment platform CircleUp, Ryan Caldbeck recently published a redacted version of a scathing email he’d written to a former investor board member. The email recounts the board member’s toxic behaviour and is an all too real example of what can happen when founders don’t do their own due diligence on investors. If you’re contemplating raising capital, please read it.

The creators of Southpark made a new satire show using deepfakes, Sassy Justice. As you’d expect it is equal parts hilarious, terrifying and amazing.

So Southpark's Trey Parker and Matt Stone just released @sassyjustice, a new satire project with some of the best quality deepfakes I've seen in a while.

We love feedback – if you have any or want to continue the conversation, please reach out.

Watch Gavin live on AusBiz at 2pm on Mondays, when he opens the Startup Hour of Power.