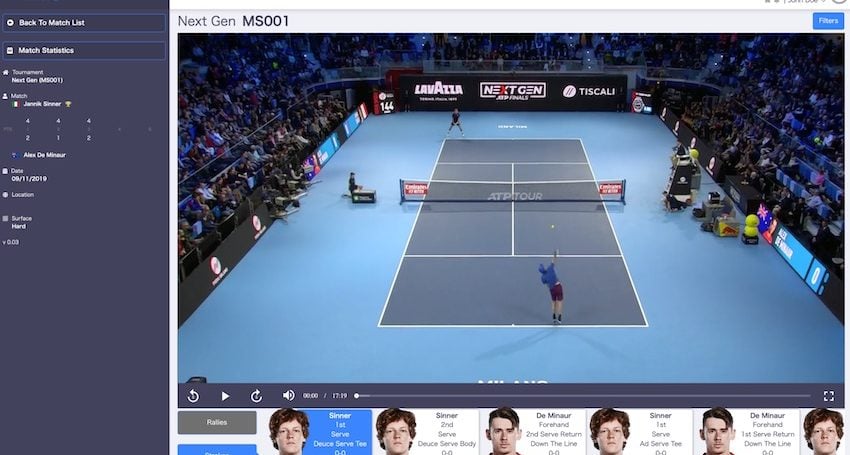 The AUD$10 a month subscription allows players to upload videos of their games and training sessions to a site where the footage is automatically processed with AI within 30 minutes, depending on available upload speeds, and then share it with their coach.

Dr To said although this type of analysis has been available at the elite level for years, it has not been available for amateurs because manual labelling of footage made video analytics too slow and the need for high-tech cameras made it too expensive.

“It helps the (amateur) see themselves and filter to specific parts of their game,” Dr To said.

“This allows the player to improve their game quicker and more efficiently. Most people are visual based learners, so the ability to filter down to a specific stroke type and direction is a major advantage.”

To use the program, a smartphone or GoPro is placed directly behind the player, attached to the fence, on a tripod, or simply with a parent filming behind the court.

Dr To, who has a PhD in Chemical Engineering and an MBA from the University College London, said coaches can use the program for free.

“From the coaches point of view, they can expand their business globally,” Dr To says

“They can coach players not only at their club, but they can coach others around the world, (helping) to market their business online.”

The program was tested and delivered in real-time at the inaugural ATP Cup in January this year.

The app was developed in conjunction with the Innovation and Collaboration Centre at the University of South Australia by Dr To, Dr Mark McDonnell and Dr Guy Gallasch, with the help of Senior Data Engineer James McNeill.

The team formed startup Athletes AI in July 2017 to scale their idea across multiple sports globally, and Dr To says the vision of the company is to put video analytics in the hands of all athletes.

To do so, Dr To is looking to raise AUD$1.2 million in capital for market and product development for the company that has a pre-money valuation of $5 million.

The capital would go towards linking with key influencers in the sports industry as well as further refining the product to include cricket and baseball.

So far they have formed partnerships with Cricket Australia and the Adelaide Football Club.

Previous article Covid-19 has given us wicked problems to solve – and here’s how to get started on them
Next article Applications for Startmate’s free 1-on-1 mentoring program, Office Hours, close this Sunday
Via News & Analysis
Tags AIcontributor posttennisThe Lead