Deep tech offers Australia a $1.1 billion chance to solve some of the world’s greatest problems 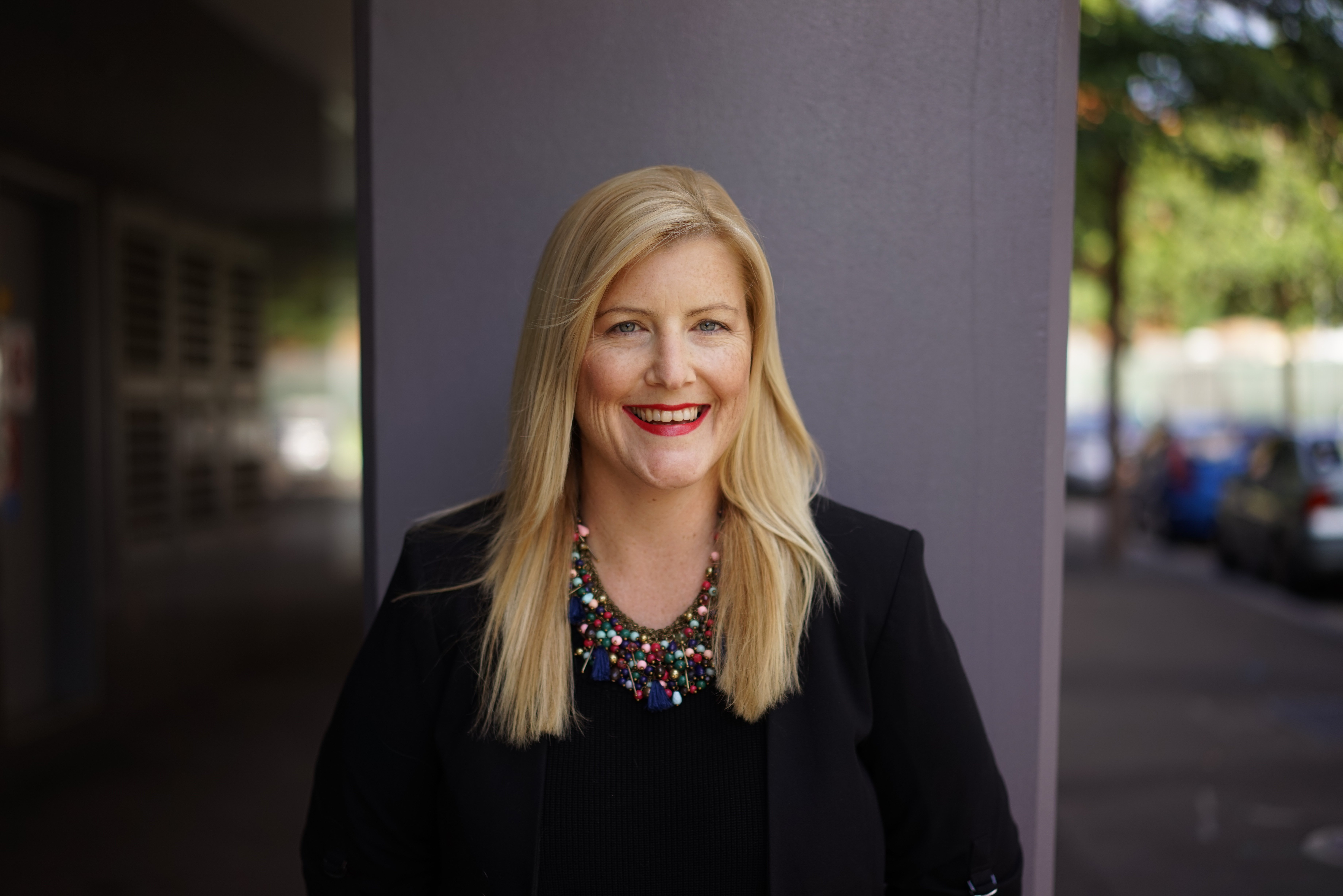 Deep tech startups generate $3 in economic value for every $1 in revenue according to a new report released by Sydney-based incubator Cicada Innovations.

The deep tech Economic Impact Report by Accenture’s AlphaBeta was prepared for Cicada Innovations as it marks its 20th anniversary as the nation’s pioneering incubator.

The report identifies $1.1 billion in potential economic growth from investment in scaling sovereign capacity in manufacturing, jobs, and growth through operations like Cicada innovations.

The 3x return on revenue from deep tech startups is a consequence of the transformative nature of their innovations and the resulting positive social outcomes that occur, such as reduced healthcare burden and lower environmental impact, the AlphaBeta report says.

It also uncovered that the startups were experiencing exponential growth, with 78% of the $378 million generated in the last three of the 11 years.

Over two decades, Cicada Innovations has helped incubate more than 100 startups, as well as assisting 300-plus companies raise more than $450 million in venture capital and government grants.

Cicada’s impact on the economy through the startups it works with ranges from the creation of hundreds of jobs, to building local manufacturing capability, filing more than 500 patents and trademarks, and launch more than 700 deep tech innovations globally.

Cicada Innovations CEO, Sally-Ann Williams said that using these figures, if governments made a combined direct investment into just three new Cicada operations, $1.1 billion in combined economic value could be created for the nation, with an additional $1.35 billion in investment potentially raised for deep tech companies in just 15 years.

“While the modelling demonstrates that deep tech companies hold significant potential for value-creation in sovereign economies, it also shows that they require decades-long investment and specialised networks and support if they are to reach that point of explosive growth and value creation,” she said.

“We know this is possible because of Australian companies such as Cochlear, ResMed, and CSL Limited now valued at $12 billion, $35 billion, and $127 billion respectively and their innovative deep tech has transformed the lives of millions.”

Williams said the nation is not yet fully embracing this opportunity.

“Singapore’s equivalent deep tech incubator, SG Innovate, has received $50 million in government funding since 2016 and has incubated 70 startups that have collectively raised $558 million in private investment,” she said.

“So, imagine what we could achieve here in Australia with more government support to scale our proven and successful model.”

Williams said that if government invested in Cicada operations, including buildings and establishment costs, it’s already proven to be self-sustaining within three years and deliver long term economic benefits.

“The projections indicate a huge return on investment, and represent an unprecedented opportunity for Australia if federal, state, and local governments choose to take a visionary and long-term approach,” she said.

The Report’s findings align with the work of leading economists, who have long held that the total economic return on R&D may be two to three times the return captured by innovating firms.

It also concluded that incubated startups grow 19.2% faster annually and have a significantly accelerated path to market. More importantly, the majority of value created by deep tech commercialisation accrues locally, not globally, with at least a third coming from local R&D initiatives alone.

“Importantly, it also demonstrates how that value benefits not just entrepreneurs, but their customers, consumers and the broader society,” he said.

Williams said that if wide scope of 2020’s disasters, from fires to floods, droughts and a global pandemic demonstrated that creativity and collaboration are even more vital than we realised.

“We have had to galvanise together – government, industry, community, research and education institutions, and entrepreneurs – to build solutions and get them into the field fast and at scale,” she said.

She pointed to the deep tech firms at Cicada pivoting rapidly to respond to the pandemic.

“The rest of the Cicada Innovations community has not missed a beat during the pandemic – in fact, we have never been busier.”

“The Australian deep tech giants are “thirty-year overnight successes”. Many companies at Cicada Innovations have been on their journey for over a decade,” she said.

“While deep tech’s long timeframes can be daunting, they yield the technologies that can help us hear, cure cancers, connect us across oceans, and feed us.”

The deep tech Economic Impact Report can be downloaded from the Cicada Innovations website here. 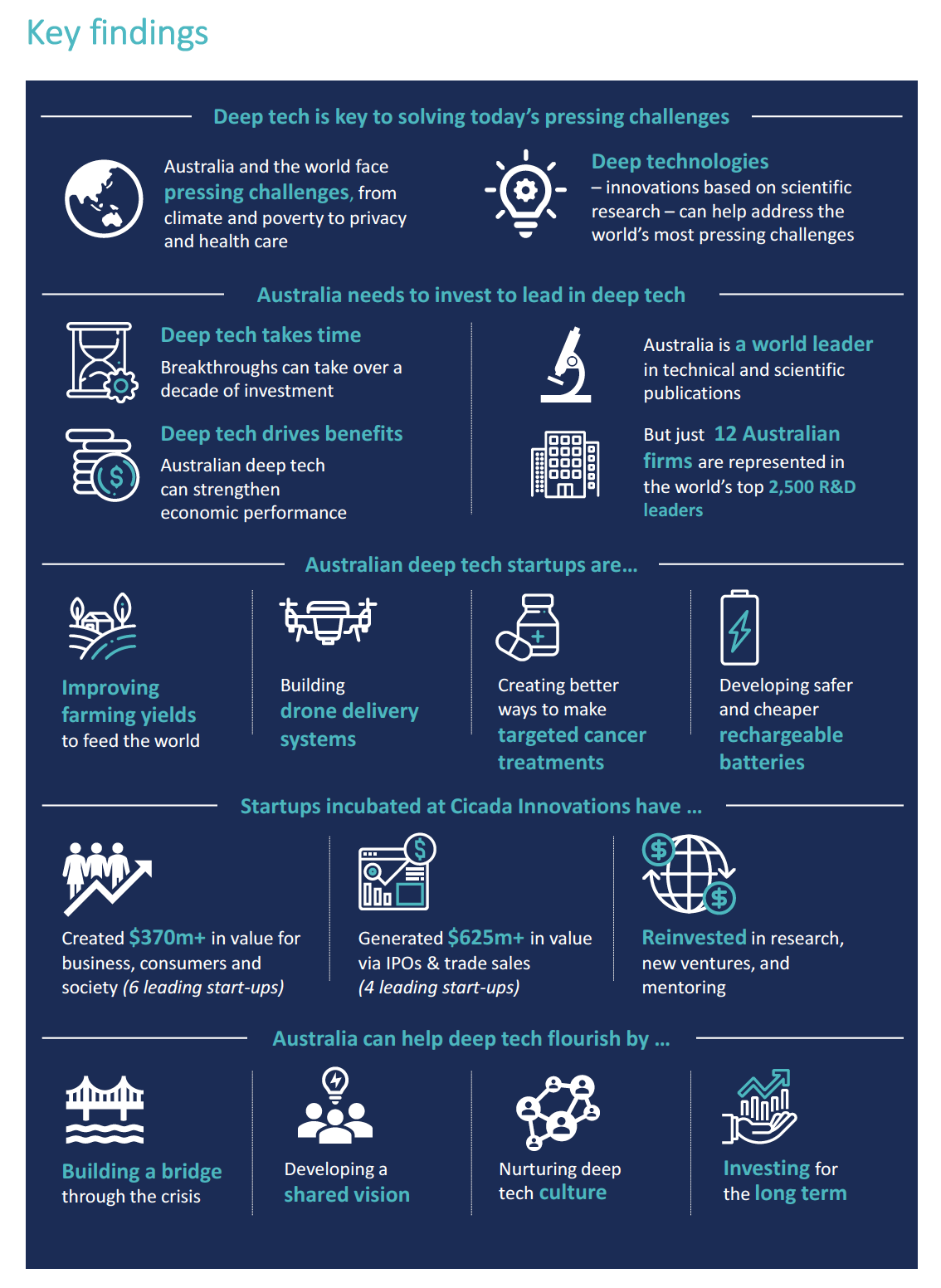 NOW READ: How super incubators can change and boost the Australian economy

Previous article $250,000 is up for grabs for agritech startups tackling water issues
Next article How super incubators can change and boost the Australian economy
Via News & Analysis
Tags