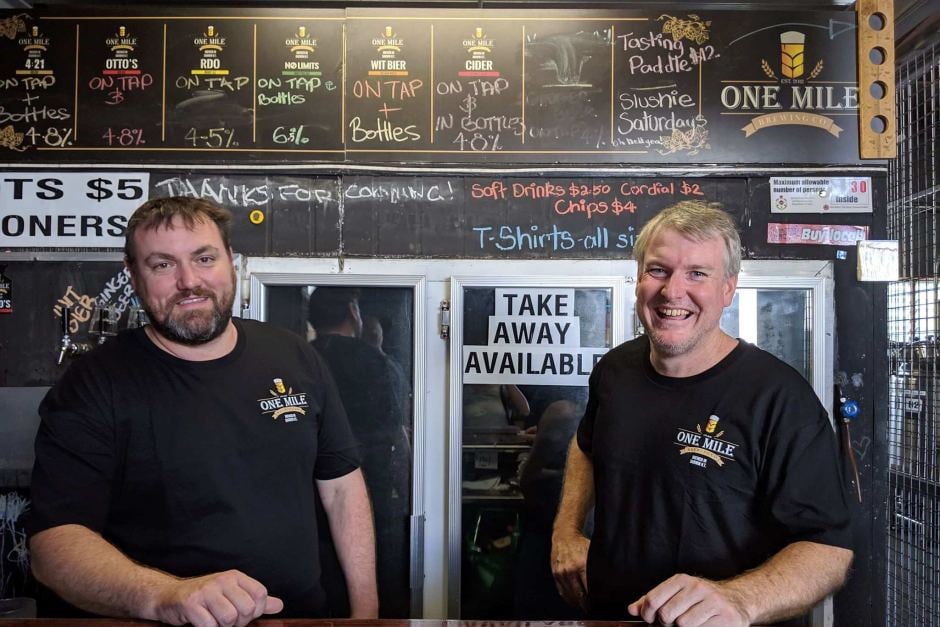 The One Mile Brewery team

While the Morrison government’s $130 billion JobKeeper package and a range of other measures to help businesses survive the coronavirus crisis have been widely welcomed, Australia’s nascent boutique brewery industry fears it’s been completely overlooked in the stimulus efforts.

Parliament passed the massive wage subsidy plan on Wednesday, but the government resisted attempts to expand the eligibility of workers who qualified for the $750 a week payment and the Independent Brewers Association (IBA) believes that decision will kill off an industry where many of the startup founders run their breweries as a side hustle and don’t draw a salary or employ full-time staff.

IBA chairman Peter Philip said his sector is particularly vulnerable, with a recent study by the association finding that 93% of brewers are still loss-making and employing a regularly changing casual workforce.

Regional small breweries have already been hard hit, Philip said, by an end to tourism traffic, smaller population pools for takeaway and forced lockdowns, and the IBA is launching its own campaign #KeepingLocalAlive to try and help small brewers through the next six months.

“Beer is our national social drink of choice and we think all Australians want to see  independently owned Australian breweries survive so we can keep providing beer lovers with great products made by small, locally-owned breweries” Philip said.

“Indie brewers are at a massive competitive disadvantage to the multinational mega-brewers because our beer is hand-crafted, which means we employ 15 times the number of employees per litre of beer.”

Philip argues craft brewers have already paid their way as taxpayers and therefore deserve support too.

“Many are surprised to learn that excise makes up 45% of the cost of making a beer. That’s more than we pay our staff or the farmers who grow the barley and hops we use. This tax goes  up twice a year and is the fourth highest in the industrialised world,” he said.

The Northern Territory’s One Mile Brewery is among those who’ve completely missed out on government support, co-founder Bardy Bayram said.

“We both work and our brewery isn’t a full-time venture for us. But, it’s hit us hard, we’ve lost three quarters of our business,” he said.

“Luckily, we’ve got takeaway and the territories are behind us, but the margin is not super high, when compared with keg sales. We still have one casual staff member, but they’re the only one getting paid. Neither of us take a salary.

“Much like Lion, we reached out to all our customers and said if you have kegs, we’ll take it back and credit you. But unfortunately, we haven’t been eligible for any government support because we have no full time employees and we don’t meet the requirement.”

For Annelies Nijskens, co-owner Madocke Brewing on the Gold Coast, the timing is even tougher. She’d just quit her job to focus on the business as she took it from a residential garage to a purpose-built brewery.

“Unfortunately, those plans have gone back into the cupboard. We’re just holding fire at the moment to see what will happen,” she said.

Mark Prior, owner of the award-winning Barossa Valley One Barrel Brewing is in the same situation. Six months ago he was riding high after his The Silesian Gose beer was a winner in the World Beer Awards. With investors lined up and plans to move from his one-man operation to a cellar door, the money vanished as the stock market plunged.

“I had some investors come on board recently and we were about to open, which was huge for us and for the local area. But, my investor group had their money tied up in stocks and shares and after the market collapsed they couldn’t move forward,” Prior said

“Last year I had 30 beers at The Beer and BBQ Festival and had planned for that again. I went  into high production and made all these batches with varied ingredients. Now I’m stuck with all this beer I can’t do much with. I can’t even put them into packaging due to labour cost, so it’s had a huge impact.”

In the wake of the industry’s concerns, the IBA has put forward a proposal to the federal Government with suggestions to help small breweries.