KPMG: Australian fintech investment halved in the first half of 2019 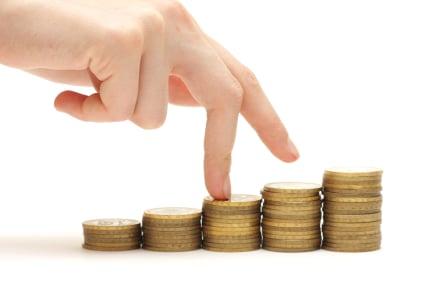 Investment in Australia’s fintech sector in the first six months of 2019 was half the level of 12 months ago, but the second half of the year looks set for a dramatic improvement according to a new report from KPMG.

Investors poured US$101.1 million into fintech in Australia in H1 2019, down from US$223m in the the corresponding period in 2018, according to KPMG’s Pulse of Fintech report. The 2019 figure was in line with the subdued trend globally.

And the consultancy giant said more deals are on the horizon for the second half of 2019, including Judo Bank’s record $400 million raise announced this week.

The biggest Australian fintech transaction recorded by the Pulse of Fintech report in the first half of the year was the Airwallex US$100 mil Series C funding in March 2019, which was also the third biggest deal in Asia for the period.

The largest fintech deal regionally was the US$2 bil NCF Wealth Holdings merger in China, followed by the US$200 mil Blockchain Exchange Alliance Series A funding in South Korea.

KPMG does not track IPOs in the Pulse of Fintech report, but noted Australia was an exception on that front, with SME lending company Prospa floating in June.

Dan Teper, KPMG Australia Partner and Head of Fintech, said the dip in fintech investment in Australia to start 2019 more of a pause.

“Beside VC investment in fintech startups, there is also the possibility of future listing and M&A activity, following the success of fintech IPOs such as Prospa and Afterpay. Their experience could encourage other fintech companies to consider IPOs,” he said.

A lack of megadeals in China accounted for the majority of the decline, with investors holding back given both the US-China trade tensions and the increasing regulatory focus being given to fintech and fintech companies by Beijing.

KPMG said the highlights during the first half of 2019 were: 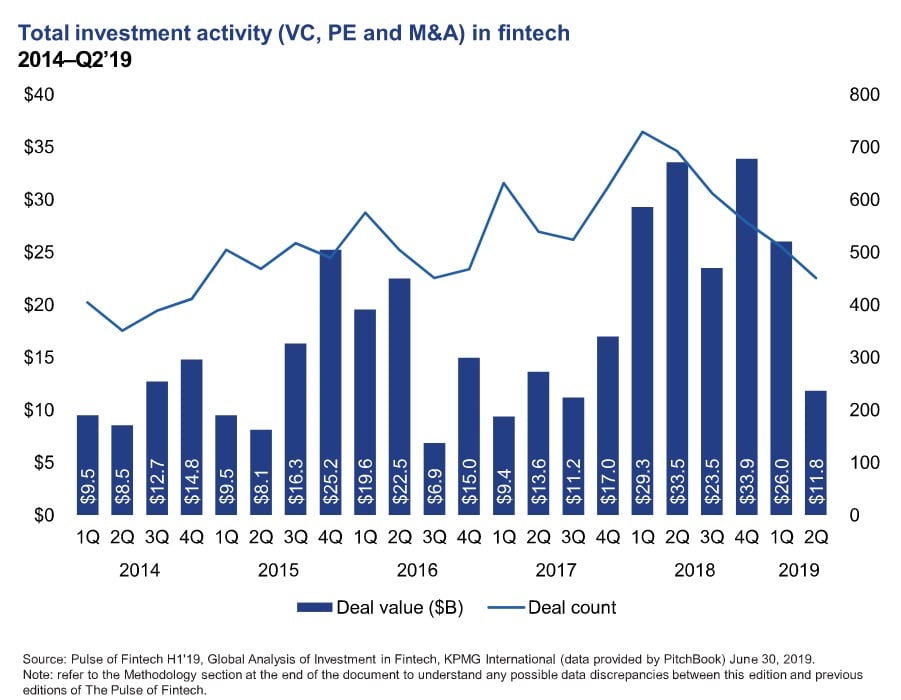 Pointing to trends to watch in Australia and Asia-Pacific, KPMG identified five key areas and what to look for. With three challenger banks granted full banking licences in 2019 so far, and another imminent, the neo bank movement is one to watch.

Ian Pollari, National Sector Lead, Banking and Global Co-Leader of KPMG Fintech Practice, said the adoption of open banking globally is emerging as a driver of fintech investment, along with the opportunities presented by technologies like AI, machine learning and data analytics.

“We’re seeing the growth of sub-sectors like wealthtech and proptech, in addition to increasing participation from the big tech companies looking to leverage the deep customer information they have to expand their reach into financial services,” he said.

The five trends to watch are:

“Open banking and open data continue to be front and centre for incumbent and challenger banks alike. Australia’s Parliament has passed the Consumer Data Right (CDR) Bill, marking the start of Open Banking and the first step towards an open data future for the country. As well as finance and banking, legislation will expand in the near future to encompass energy retailers, telecommunications companies and superannuation funds,” the report says.

“Australia and China are zoning in on regtech, with ASIC (Australian Securities and Investments Commission) funding studies to investigate how natural language processing could help detect misconduct and improve regulation and the China Securities Regulatory Commission pushing for the adoption of regtech to help strengthen controls over fintech usage,” the report says.

“Blockchain is expected to gain more attention from fintech investors in China, particularly in microfinancing. The Australian Digital Currency Association recently held its first “Blockies” awards for blockchain innovators. There has also been a trend toward multiple financial services organisations working together to reimagine global trade and to rewire industries using blockchain solutions to make them more efficient. This will be a key area to watch as it could see some significant investments and partnerships over time,” the report says.

“Facebook’s announcement of a new cryptocurrency, Libra, put cryptocurrencies back into the spotlight. A number of global companies have bought into Libra; in addition to Facebook, Visa, Mastercard, PayPal, eBay, Stripe, Mercado Libre, the Creative Destruction Lab, and others have combined to form the Libra Association. According to Ross Buckley, KPMG Law-KWM professor of disruptive innovation, UNSW Sydney, Libra has massive potential to disrupt banking in Australia, due to Australia’s high remittance costs to the Pacific. One Australian university has recently announced a cryptocurrency PhD program,” the report says.

“Digital banks continued to draw significant venture capital interest during H1’19. So far this year Australian regulators have issued three banking licences to Australian neobanks Judo, Volt and 86 400, and Xinja expects its full licence soon. The first international neobank, UK-based Revolut, has also announced a beta version of its app in Australia. A number of other overseas digital banks are also focused on international expansion,” the report says.

The KPMG Pulse of Fintech report is available online here.