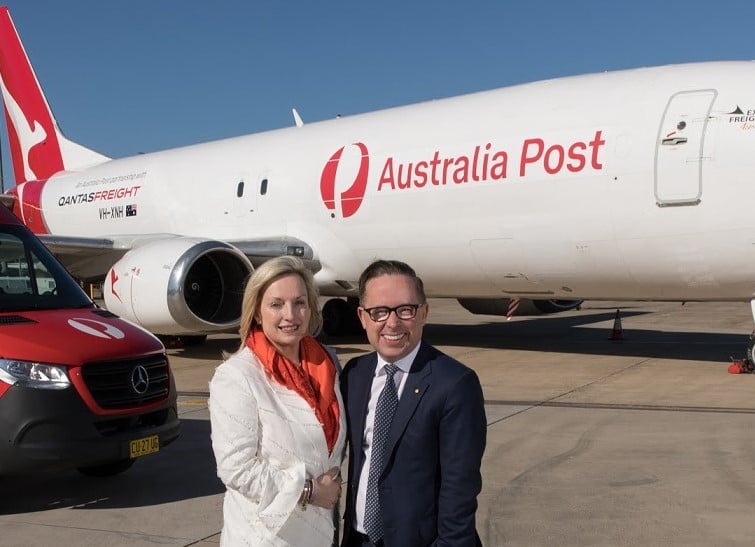 Australia Post is investing nearly $2 billion to pick up the pace of its lucrative parcel delivery service, announcing a $1 billion deal with Qantas to increase airfreight capacity as parcel revenues head towards $4 billion for the postal service.

The converted A321s have 50% more capacity – an additional nine tonnes – compared to the existing Boeing 737 freighters.

Australia Post will also have priority access to cargo space on up to 1,500 Qantas and Jetstar passenger flights daily.

Parcel delivery has been Australia Post’s lifeblood amid plummeting letter deliveries. Last week the company announced it wanted to increase the cost of posting letters by 10% to $1.10 in 2020 to keep that side of the business viable. Australia Post lost $190 million delivering letters last financial year.

Meanwhile, profitability was up 41% jump to $134 million thanks with parcels delivery up 11% on $3.5 billion in revenue.

The company’s FY19 results are due later this month.

Australia Post’s 2019 Inside Australian Online Shopping Report found that nearly three-quarters of all Australian households are now shopping online amid expectations that around 12% of all consumer spending will be conducted online by 2021.

The company’s report found that online purchases in 2018 grew by more than 13% year-on-year in every State and Territory, with the national average growing over 20%. The Australia Post Group delivered more than 3.3 billion items to more than 12 million addresses across the country last year.

Australia Post has also been getting into the order fulfillment business, launching Fulfilio, an Amazon-style warehouse, packing and shipping service for online businesses, in 2018.

Under a partnership with eBay, 40,000 Australian sellers can use the service to manage their order fulfillment, and Australia Post CEO and Managing Director Christine Holgate has been opening about chasing a slice of the Amazon delivery business.

With Amazon’s promise of same or next day delivery a key selling point, Holgate appears keen to match the US marketplace giant on speed.

“This agreement will further boost our unrivalled, dedicated air freighter network with newer aircraft and more capacity right up until the opening of the new Western Sydney airport in 2026,” she said.

“The enhanced air freighter network complements $900 million in investment across our network through automation and infrastructure, and provides the speed, flexibility and reliability customers expect.”

The nation’s chief postie said last year Australia Post flew more than 400 tonnes of mail on its busiest night, and more than 40 million parcels during December, and expects those volumes to increase this Christmas.

Qantas Group CEO, Alan Joyce, said the seven-year agreement was a vote of confidence in the future growth in eCommerce and support rising demand for next-day delivery.

“Consumer preferences and expectations are rapidly changing and together with Australia Post we’re responding by growing our dedicated freighter fleet to provide a better experience for consumers and businesses,” he said.