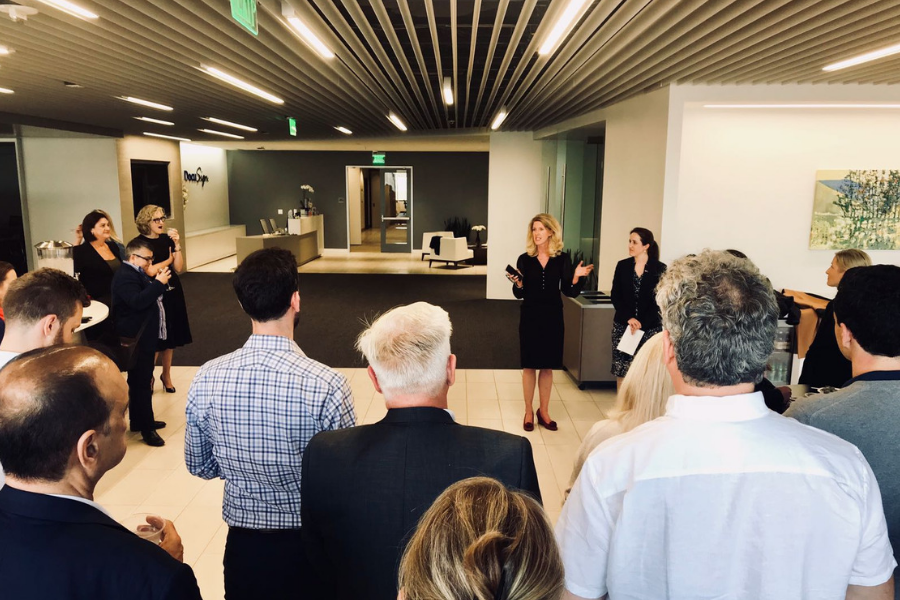 While markets across Asia and Europe have emerged as attractive destinations for Australian companies looking to move or expand abroad, the lure of Silicon Valley remains.

This was highlighted last week with the release of Rockstar Aussie Founders Living in the US, a report from the Australian Computer Society (ACS) showcasing 26 Aussie entrepreneurs living and running their startups in America.

Many have been helped along by, of course, those who came before, along with various initiatives aimed at smoothing the way for new arrivals, from the likes of Startup Catalyst missions to the Austrade landing pad in San Francisco.

Heading up the program is Karen Orford, Advance’s director of business & innovation strategy, who has spent over a decade in Silicon Valley.

She was there in the early days, when the so-called Aussie mafia was working from what she calls the first Australian ‘landing pad’: the Starbucks on San Francisco’s Market Street.

Her own startup journey had begun in 2008, when she launched ekidnaworld, a ‘virtual world’ for children. The idea came as her daughters, then aged 7 and 9, wanted to begin chatting online. Orford couldn’t find a site she was comfortable would be safe enough so, despite the fact she had no tech background, she decided to build her own.

Orford was then in 2009 awarded one of eight places on the first Advance innovation program to America.

“Ten years and a couple of startups later, my daughters and I continue to live in San Francisco, and these days I have the great privilege of being able to give back to a program that personally gave me so much,” Orford said.

The latest iteration of this program is Propel, which looks to enable participants to learn from Silicon Valley’s mindset and culture, and provide them with direct access to US venture capitalists.

Despite the growth of other markets, Orford believes the US offers Australian startups three key benefits: venture capital, a supportive ecosystem, and market size.

“Venture capital in Australia reached a record $630 million in 2018 but investors are shying away from early to mid stage startups and so they are having to look abroad, in particular to the US,” she explained.

The Propel program provides direct access to potential funding opportunities, while also connecting participants to an Advance mentor who has experience – and most importantly, connections – in the US.

“The US market opportunity is 12 times that of Australia, and the perfect launching pad of any startup wishing to building a global company, but the greatest mistake an Australian entrepreneur can make is to assume that the US market is simply Australia on steroids,” Orford said.

“An important part of the Propel program is understanding small market vs large market selling: who, what, and how.”

Beyond the connections, Orford believes this understanding, and shifting of a participant’s mindset. is key to the program.

For example, Orford explained that among the barriers she often sees Aussie entrepreneurs come up against is the fact that they don’t know that they must always be selling.

“You might not realise it but you are always selling your story, your business and yourself to anyone you talk to – be conscious, deliberate and aware of this,” she said.

The same goes for being able to read between the lines of American VC speak.

“[You have to] learn the culture of venture capital, understand their language – the Californian ‘No’ – and be aware of what information they will want to hear from you.”

The Propel program has evolved significantly in various ways since the early days, but one of the key changes, Orford said, has been implementing a solution to an old school problem: time zones.

“In the early years the program neglected to recognise the fact that founders were still needing to run their companies back in Australia while simultaneously participating in the program in the US and so they were often distracted throughout the day trying to do so,” Orford said.

“We addressed this by ending the daily sessions at 4pm, early morning in Australia, and giving participants a couple of hours of to do emails and take calls before the networking events begin at 6pm. For the same reason the daily sessions begin at 10am as this allows time to respond to overnight emails from Australia before settling into a full day of learnings while Australia sleeps.”

With applications to the 2019 Propel program now open, Orford said one of her goals for the program this year is to ensure it continues to provide up to date content for founders.

She will be bringing in experts to address evolving issues such as immigration in the era of Trump, and what this means in regards to changes to visas and labour laws.