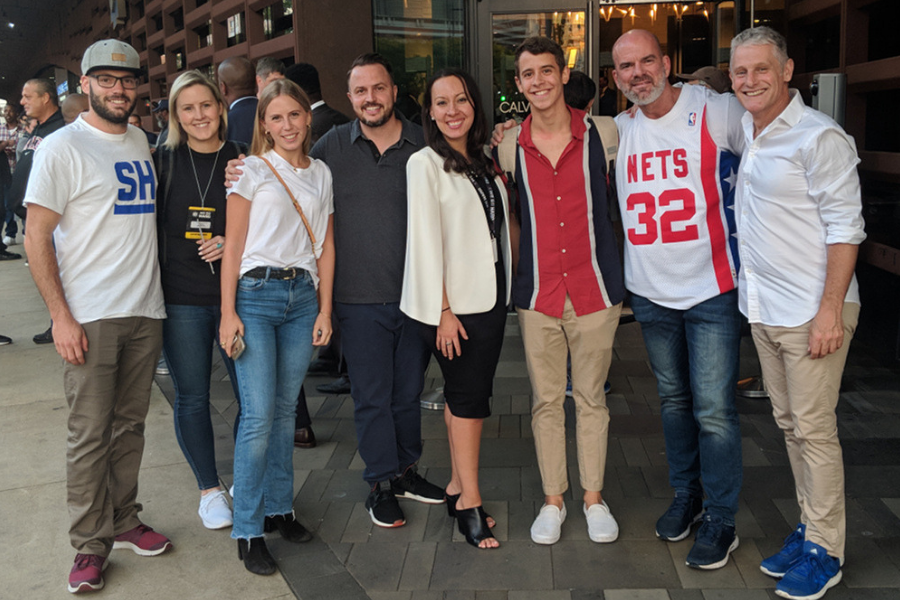 So often many of us will add a sporting event into our international travel itinerary but to share that experience with a local fan makes for a unique experience.

Australian company SportsHosts plans to power those experiences with their platform which connects travellers, both local and international, with local fans to watch sports together.

SportsHosts cofounder Melissa Blair explains the platform and community that the company is building.

“We really believe in the bigger picture that sports breaks boundaries. You can find a common connection through sport. The community that we’ve drawn into this SportsHosts world is this amazing, cultured, open-minded, friendly group of people who are about meeting new people and sharing experiences with them,” she said.

“The open-mindedness how sport can bring you together as that common thread but how can we share cultures and learn new things about one another.”

With travellers from over 37 different countries having a sporting experience through its platform it becomes clear interest is, while strong, only just beginning.

Expansion has taken the business to New York City. Why make New York as your next city after Melbourne?

With the idea of SportsHosts, we’ve always had the intention of going global because it’s really about reciprocation. It’s about connecting local fans with international visitors to show off their favourite sports. When you’ve done that as a host you’d really want to go overseas and be hosted.

For me personally I’m Canadian and I want to go to Brazil and go to a football game with locals or to Spain to see El Clasico. The idea is it’s a global community so coming to the US is a natural next step because, as you know, it’s one of the biggest sporting markets in the world. It’s already a global sporting market in the perspective that so many people travel to the US with the intention to see sport.

The reason we chose New York City is because there a large proportion of major league teams based here and a huge amount of inbound tourists so it’s a really good fit.

The way I interpret SportsHosts is that it’s a travel startup that happens be sport because many people integrate a sporting event into their travels. Do you agree with the idea that you are very much a travel and relationship-based business as well?

Absolutely. Essentially where the entire concept of SportsHosts came from is our founder (Darren Walls) had done a trip around the world investigating the latest trends in travel and tourism and the biggest by far is that travellers are looking to not be tourists but instead deal with the culture, meet locals and have authentic, local experiences.

We’re trying to figure out what’s a way people can do that that’s real and not pay for a tour guide, and that’s when sport came into the mix because sports fans are willing to share their passion for their city, their sport and team, and do that for free because they get the benefit of it as well.

Absolutely, local knowledge is that thing we want to learn about and connect with.

It’s not just the game too, it’s the game day experience. Even in the US, going to a tailgate before a game, rocking up by yourself or with friends that you’re travelling with, you don’t know where to go and it may be difficult to randomly join someone’s barbecue. Being able to go through SportsHosts, you’re right there with the locals.” When you said you’re based in New York, one of my thoughts was you could offer tailgate experiences.

College football and the NFL is so massive in the US in that anywhere at one of those games you can get a tailgate.

By being based in New York has really been about dipping our toes in the market but in the next year we’ll progressively grow into other cities. We’ve just signed a partnership with Major League Baseball’s San Francisco Giants and then we’re trickling our way into central US and further south and then trying to move up the east coast.

New York was initial start because of our partnerships with New York City FC and the Brooklyn Nets.

What types of people have been hosts and travellers?

Travellers tend to be a little bit younger but that’s probably due to the acquisition channels that we’ve gone through. Right now, travellers are between 18 to 35 year-olds.  Other than travellers we have international students and ex-pats that have settled into a new community using the platform. In the US, we’ve really opened the door to locals hosting other locals.

The hosts can skew a little bit older, ages 28 to 60-year-old’s. We joke that we’re a startup where we have early adopters who are in their 80s!

There’s AFL fans who have been club members for over 40 years. They’re the best people to go to games with because they’re true blue legends, they know anything and everything about their team!

The hosts tend to be super passionate about their team or their sport and really proud of their city and want to show it off. They typically attend a lot of matches anyway and by taking someone new with them it allows them to diversify their own experiences.

How does the official partnerships you have with clubs in Melbourne and New York relate to the SportsHosts community? How do the clubs help you drive that community?

They’re important, and they’re important to our revenue model. By working with the clubs directly we prepare the content on our end and it goes through their channels out to their fan base.

Melbourne Football Club is a great example, they’re one of our inaugural partners, we’ll prepare content for them, they club will send an eDM to their database who have the option to sign up to become hosts. It’s the greatest and closest access point to the fans to then bring them in to host. They also help to facilitate a reward recognition program. Every time you host you’re getting something back from the team.

It could be anything such as a simple thank you letter from the team, to discounts on merchandise, to opportunities to win holidays. With Melbourne, they ran a competition where you could visit anywhere in the world to attend any sporting event. These things motivate people to host. But it’s not that necessary, these rewards aren’t something hosts need it’s just an incentive that ultimately fulfils their goal of being closer to the team.

We initially thought this program would only help teams bring in new people with a really high touch engagement that they’re going to be converted to fans in a much higher percentage. That’s a great benefit to teams who want to grow their fanbase, especially internationally.

The golden goose for us was not only that it brought in the benefit of international fans it actually helped them excite and engage their current fans in a deeper way. What’s the most effective acquisition channel for SportsHosts?

It’s 100 per cent through each team’s channels, such as eDM’s from the team. One thing we’ve found really works is hosting team parties, pre-game parties. We’ll bring people together, put on drinks and hosted by us in person to let people know what SportsHosts is about.

The other big strategy is opinion leaders. We work a lot with fan groups and online fan groups and admins. We work really closely with them, firstly to get them to know about us, secondly get them to host and thirdly share that hosting experience within their fan group as they’re influencers.

We also work with podcasters and YouTubers, essentially anyone that is an influencer in their community.

Where’s the growth prospects at? What potential markets or sports do you wish to be targeting?

One quote we like saying is there’s 3.5 billion sports fans in the world, that’s greater than any race, country combined. Our intention for the next 12 to 18 months is to grow rapidly in the US sports market. MLB is the big one for us.

We did a trial with the San Francisco Giants in September and within eight games we had 81 new people experiencing the sport and 18 hosts. It was amazing, it was one of the best trials we’ve done to date. Baseball is primed for this, we can get plenty of hosts out to games, tickets are affordable, you can manage seating easily and the game is played at a pace where it can be easily explained, have some drinks and conversation. It’s the perfect sport for us. We have our sights set on growing in MLB but we want to work as many teams as we can.

What lessons can you provide for an Australian business setting up a base in the US? Any challenges and pitfalls?

Partnerships and contacts are key. We found a US based advisor that is a former head of a number of ticket companies, 40 years of experience in ticketing and he was our door opener. We courted him for six months and after that he was fully onboard and was onside with what we’re doing and he came on as a Director and opened up all the doors for major league teams.

Identifying some of those influencers or leaders in your target markets and how do you start courting them early on before you even enter the market.

Thinking well far out, could you envision that you can cross over outside of sport with such a platform? Do you ever have those conversations?

Yeah absolutely. The biggest insight is that humans want to belong and connect. When you breakdown any of the messaging or marketing and bring it to the very basics we want to connect with like-minded people and belong to something.

Instead of sport it can be translated to arts, music, recreational sports, concerts. It can go beyond the sports paradigm, but we want to focus on what we know and can do right now.