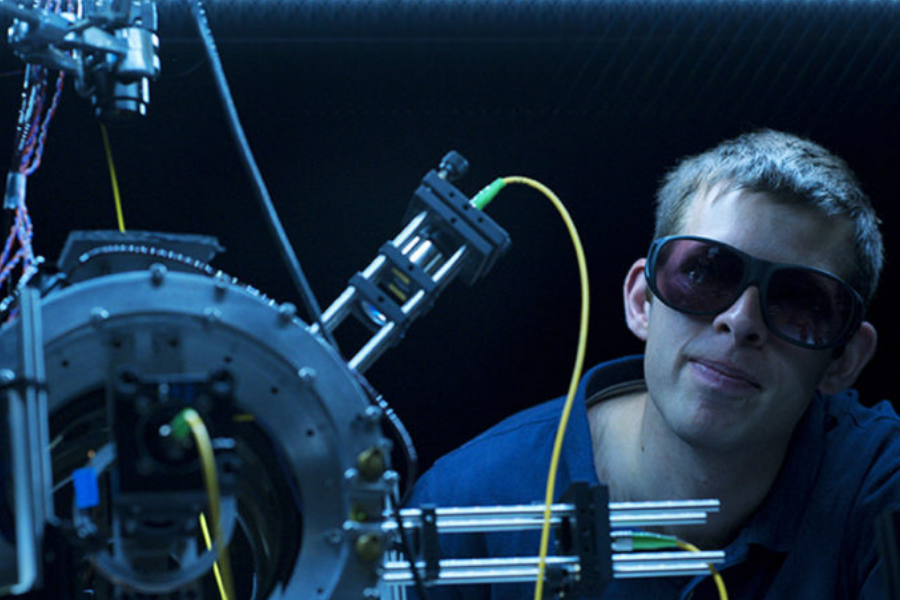 A light driven energy trap similar to tractor beams used to capture spaceships in science fiction movies such as Star Trek and Star Wars has been developed by researchers in South Australia.

The discovery is opening the way for new quantum experiments that may lead to new secure communications or advanced sensing technologies.

University of Adelaide researchers have created the infrared tractor beam – or light-driven energy trap – for atoms. But rather than sucking spaceships into a space station, their tractor beam pulls atoms into a microscopic hole at the centre of a special optical fibre.

Published in the journal Physical Review Applied, the researchers from the University’s Institute for Photonics and Advanced Sensing (IPAS) say this is the first time that scientists have been able to demonstrate a highly efficient ‘waveguide trap’.

The tractor beam works by the infrared light interacting with the atoms to create a change in energy that drives the atoms to the most intense part of the light beam.

PhD student Ashby Hilton developed the technology and said that although tractor beams in movies like Star Trek and Star Wars are green or blue, in this case the trap is made of invisible infrared light.

“The beam grabs hold of atoms that are floating in a chamber that is almost completely emptied of gas – a little sample of outer space on Earth,” he said.

“Every atom that enters the tractor beam is pulled into the fibre – there is no escape.”

Once sucked into the interior of the optical fibre the atoms can be held for long periods of time.

“Our experiments show that we can very precisely control light to produce exactly the right conditions to control atoms.”

“Our first experiments intend to use these stored atoms as elements of a quantum memory,” he said.

“We hope that our work may eventually form part of absolutely secure communications channel that is of obvious high interest to defence, intelligence and industry.”

The researchers are now moving onto the next stage in which the tractor beam is formed from a hollow cone of light rather than a solid beam of light. In this new configuration the atoms will be held at the centre of the light cone where it is perfectly dark.

“This is an extremely powerful idea – we can move and manipulate the atoms, but are able to shield the atoms from the disruptive effect of intense light,” said Dr Light.

The researchers have essentially created a quantum funnel which allows them to guide and trap atoms for longer without disrupting their delicate quantum state.

Institute for Photonics and Advanced Sensing Director Professor Andre Luiten said the researchers were manipulating and measuring individual atoms and molecules to sense the world around them.

“This new era of quantum sensing is opening up diverse new possibilities from attempting to detect disease through finding particular molecules in the breath, to assisting miners and defence by detecting anomalous magnetic fields associated with mineral deposits or covert submarine activity,” Professor Luiten said.