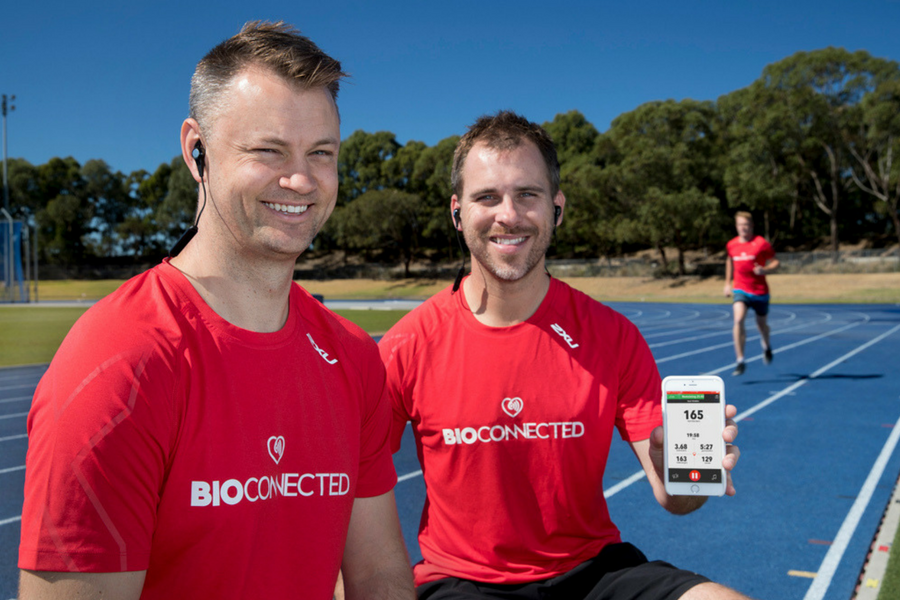 The company has set out with the aim of boosting a person’s health and wellness with their bio-sensing headphones, which measure heart rate by blood flow analysis through a person’s ears. A user also gets coaching encouragement through real-time information and a fitness app that records and reports on all run data to help training and performance.

An eye on growing their market outside of Australia has been helped by a successful pitch at the University of Queensland’s HYPE Spin Lab and winning the Austrade Going Global Award; with this, the team will be having a short residency at one of Austrade’s Landing Pads in Berlin, Singapore, Shanghai, San Francisco, or Tel Aviv.

BioConnected’s cofounder Dr Sven Rees talked to Bullpen about launching the first version of their product and what’s in store for the company.

Six months in, what has the customer and market reaction been to your product?

We have over 700 happy customers and to keep it in perspective that’s us selling it almost direct. It’s a huge difference from being in a retail store where if you applied proper margins it would be the equivalent of us selling over 4000 units.

Our biggest negative to date has been something that we didn’t pick up during our beta testing. Even after one year of beta testing, post launch a lot of our customers found paring the audio for the device challenging. Somehow this was not reported during our beta testing. We had extended the paring time by one to two seconds too long so we’ve learnt from that and we’ve rewritten our firmware, we’ve changed instructions and we’ve put a pamphlet in the gift pack itself.

How do you feel the team tackled and responded to that challenge?

I feel that’s where our strength is and it’s probably nice that we haven’t expanded too quickly because we’ve been able to handle that challenge.

Although we’ve got sales and a map of where people are exercising, we know we’ve got users in the UK, China, US, New Zealand but 95 percent of our customer base is Australian. While we’re really targeting Australia we do have plans to scale beyond Australia, but keeping it quite contained at the moment has allowed us to adapt to challenges quite quickly and I think that’s one of the secrets of a startup.

With that in mind, are you ready to scale furthermore?

We’re definitely ready to expand beyond Australian borders. We’ve got stock available, we’ve got a supply chain available, for us it’s being clever with our marketing dollars. At the moment being based in Australia is the cheapest marketing dollar and ease of access is on our home shore.

I have noticed that your growth has been organic.

We’ve still spent some money on marketing but again talking about pros and cons, we found that we couldn’t make Google Analytics work for us, we spent lot of money on Google and AdWords, but we found we couldn’t get our customer acquisition costs to a point where we’d actually make money from it so we actually dropped Google. We’ve had a lot more success on Facebook and we’ve been able to target people a lot better because we know who our customer is and it’s easier for us to segment our target market and convert better for each age group and income brackets.

What is the current profile of a BioConnected headphone user?

It’s roughly equal between males and females purchasing the product. Interestingly, we have a slightly cheaper customer acquisition cost for females to males which means we can develop campaigns targeting women.

We’re currently seeing the average age is between 40 to 50.

BP: Are you actively trying to take on investment? If so do you have percentages, figures in mind and regions that you plan to target with an injection of funding.

We’re after $2.2 million. It will help us to bring in an in-house development team and that allows us to scale, pivot a lot more as we look to expand overseas.

In terms of expanding overseas, our software is in English, so other English speaking countries first. We also want to continue our presence in China and we want to take advantage of that and launch the product into the country.”

You said having an in-house team means you can pivot quicker, does that mean you have considered opportunities outside of sport and fitness such as in medical or pre-medical industries?

Very much so, and that is in our product roadmap. If we have everything in-house, we can pivot quickly, we can target corporate health, pre-medical and we have pre-medical products in our pipeline.

As a company mission we’re about trying to improve people’s health and fitness and exercise is really the best medicine. They fit into both aspects.”

With an increase in mentors, the first edition of the product firmly out in the market where do you go from here?

We’ll go where the growth is. There are some nice angles with the Australian military at the moment that could take us in a different direction as well. We’re also learning from what other companies are doing, even what our competitors are doing in the market, and the way they’re pivoting.

One of the things we want to do is we want to bring in our second and third products fairly quickly. We’ve got a second BioConnected product coming out very soon and we’re thinking about launching that as a white label solution, rather than a BioConnected branded one. We can actually have different forms of revenue, we’ve got the software to power it as well and we can leverage the strength of other brands. It reduces the risk and brings in necessary cash flow that can be used across the business.