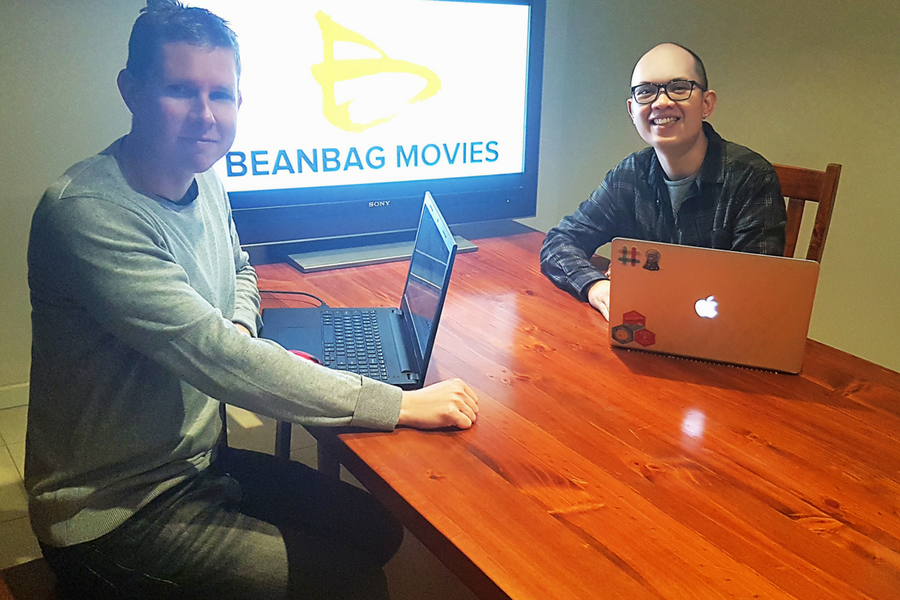 While the local cinema may only be a 10 to 20 minute drive away for the average consumer, many of us still lack the will to make the journey and cough up the $20-plus required for a ticket to see the latest blockbuster.

Between cinema attendance and piracy, the phrase ‘movies are dying’ gets thrown around a lot nowadays, but in actuality the statement is mostly an exaggeration – at least in Australia. The most recent Screen Australia stats show that local ticket sales have plateaued, or only slightly decreased since 2000, dipping to their lowest point in 2014 before rising again last year.

That said, the piracy of films is still a rampant issue, which surely culls the potential of ticket sales and costs film studios, both large and independent, hundreds of millions of dollars each year.

Taking aim at solving the piracy issue is Perth-based startup Beanbag Movies, which is taking on the ambitious goal of turning a homeowner’s entertainment area into a movie theatre through a streaming platform that allows users to watch the latest release as soon as it debuts at the cinema.

Founded by Ash Oliver and Eumir Gaspar, the idea for Beanbag emerged when Oliver experienced something a lot of moviegoers do – the desire to see a new film from an non-mainstream genre, but having no one to go with.

“I also didn’t feel that this movie had to be seen at the cinema. After trying and failing to find it online, I gave up. I would have happily paid to watch it online there and then. This gave me the idea of an online service that only streams movies that are playing in theatres,” said Oliver.

Building on the idea and its potential during his MBA studies, Oliver soon paired with Eumir, who would become the lead developer, and the pair launched the business at the beginning of 2017.

Currently in development is the Beanbag app, which is set to launch in the next six to eight months. Similar to mainstream content streaming platforms such as Netflix and Stan, Beanbag’s app is planned to hold full functionality across computers, tablets, and smart TVs.

Development of the platform’s features, Oliver said, will continue to be build over the next few months, with a number of different components in the pipeline, including tighter security.

“We are also excited about several other features we are considering, including loyalty points used to purchase movies and even items external to the app, different payment structures, and cheap last week movies. We would love to eventually integrate Beanbag with virtual reality and augmented reality headsets when feature films move into this area,” added Oliver.

What will be core for the startup, however, is the accumulation of content. Discussing what ‘size’ of film Beanbag would like to see on its platform, Oliver said the business is looking to target all movies that hit theatres, including both independent pictures and big-budget studio flicks.

For smaller films, Oliver added that the platform would offer a unique option for those which “may not require the big screen”, meaning independent studios could save money by launching the film straight onto the Beanbag platform for home streaming, rather than distributing through cinemas as well.

“We are also keen on making films from festivals available on Beanbag. Often, people can’t make festivals because they’re in other cities and it’s not practical to attend. This would allow these people to still participate by watching the movies online,” Oliver said.

Feedback for the startup came in the form of researching “relevant literature and articles” combined with a survey, which Beanbag sent out to 5,000 moviegoers across 61 countries. The survey looked to gain insight into the customer and industry problems, and validify a market need for a platform like Beanbag.

Ninety percent of respondents said they would use the streaming service, while 85 percent said they generally don’t attend the cinema when they desire to see a movie due to responsibilities such as career and family.

“We also discovered problems for the film industry that are less obvious to the general public, such as threats from the big online streaming companies and their ability to ‘hyper-market’ to people due to their extensive customer data,” explained Oliver.

“The companies now create their own content, so they have become direct competition while making money off movies made by others. This threat is made worse by the fact that the US box office has been on a downwards trend since these streaming options have been available. It’s now more important than ever for the industry to consider other options.”

Discussing how Beanbag would acquire the rights to large studio films, an understandably extensive task, Oliver said the startup has “used [their] research” to create a model of how the industry would function financially and profitably.

He added that the business doesn’t want to “give too much away” about it yet, aside from the fact that it would be pitching the model to studios, a process that will involve leveraging key data from the survey.

Other data pinned from the survey is the identification of the flat price-point which will be reasonable enough for pirates to “jump ship” to, with the startup geared to offer a pay-per-view model in the short term, and a pay-per-month option in the future.

“Our research shows that potential customers, and those who download pirated content, do not wish to pay more than US$10-$15 [$12.50-$19], after which the percentage of those who would use it decrease dramatically. If piracy is to be fought, our cost figures, and their associated customers, are a telling tale,” said Oliver.

Beanbag Movies will join the handful of startups globally looking to tackle the piracy issue, and increase the visibility of new films. Working across the US is MoviePass, a startup which offers unlimited access to the cinema for a monthly fee recently reduced from US$50 to US$10.

Before launching Beanbag globally, the business will be working to encourage studios and filmmakers to join the platform, while bringing awareness of the service to a wider community of people.

“Despite the size of the task, we feel very strongly this service should exist, and we won’t stop until we make it happen,” said Oliver.