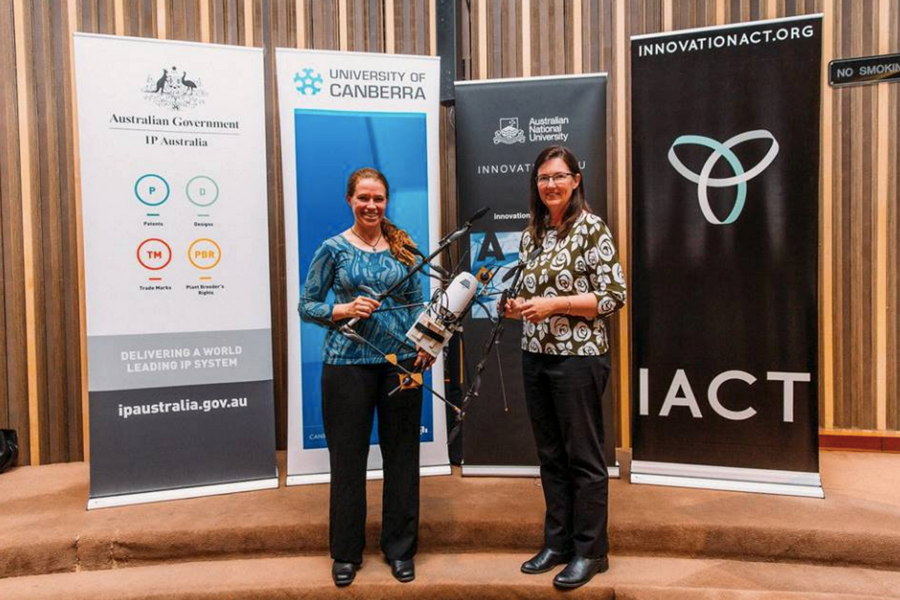 Despite the huge advances in science and technology over the last few decades, there are a whole host of tasks and processes that are still conducted in much low-tech ways than one might expect.

One such process is that of radio-tracking animals. Currently, the practice for most wildlife researchers involves carrying heavy radio receiver equipment while covering vast areas on foot, seeking out the highest ground in order to boost the chances of picking up the signals.

The startup’s business manager, Wallace was drawn into the project and tasked with helping to turn it into a business by Saunders, her old university friend, last year. Saunders herself had had the idea for the system a couple of years earlier, while going about her work as a wildlife researcher.

“She was trying to track swift parrots, which are critically endangered; they’re pesky little things, they move around so much, they migrate from Tasmania anywhere up the east coast following the flowering of trees, which changes from year to year, so she was having a really hard time trying to track them on foot,” Wallace explained.

Coming up with the idea of using a drone to conduct this work, Saunders, who was at the Australian National University at the time, obtained a grant and worked in conjunction with researchers from the University of Sydney to build the drone.

“When they did that and it was successful, they got lots of publicity and she thought, well lots of people are saying they want this and want it now, so that’s how she came to do it as a startup,” Wallace said.

Having just resigned from her job when Saunders asked her to come on board last year, Wallace thought it might be interesting to get involved.

Startup life for the pair, who are both new to it, Wallace said, has been “a rollercoaster” so far.

“We get all excited, something goes right, and then you hit another wall. It’s been really interesting…it’s been such a learning curve for both of us because we’ve never done anything like this before. We had no idea this whole sort of startup world and community even existed, and it’s just been a lot of fun to try and wrap our heads around new problems all the time,” she said.

“The other thing I really like is being in control of what I’m doing. We both tend to get annoyed when other people tell us what to do; we like to get advice, but if someone turns that into, ‘you should do this or you should do that’, then we tend to balk at that.”

The key challenge in developing Wildlife Drones has been deciding what to do about the drones themselves.

Originally, Wallace said, the startup wanted to build its own drones, though soon decided “that was a fairly silly idea”. Then came the idea to build up a fleet of drones and fly them, essentially renting out flight time to customers, before they settled on partnering with drone pilot companies to outsource both the drones and flying.

It’s finding other people to fill the holes in our skillsets; we’re both wildlife researchers, and we’ve both got experience in project management but we don’t have the technical experience, so finding people to fill those gaps has been quite a challenge, but hopefully we’ve got it right now, we’ve got a radio technician/engineer who’s an associate professor at ANU.

“They have all the experience flying the drones as well as all the insurance and the operator’s certificate; there’s an awful lot behind that before you’re able to launch the drone,” Wallace explained.

The Wildlife Drones system can track transmitters attached to an animal, with this then mapped immediately to a laptop. From there, the drone can then automatically determine where to next go up in order to better track the animals and collect more information. The startup believes the drone system can save a researcher up to 75 percent of their time.

Given the name and Saunders’ background, the startup’s first target market is wildlife researchers, however Wallace believes there are a variety of areas in which the system could be useful, such as stock management for farmers.

Wallace believes the demand is there, however the price point is a challenge – particularly for researchers relying on grants for funding.

“People kind of think they know it’s good, they can sort of see it, but they can’t seem to put that into dollar terms and how much money it will end up saving them. That’s what we’re struggling with a bit.”

In looking to solve this problem, the startup is focusing on government agencies in the immediate term, as they have more funding available up front.

Having just taken part in the ACT finals of the Australia Post Regional Pitchfest – which was “bigger than Ben Hur”, Wallace said – Wildlife Drones is now focused on capital raising and developing its second prototype, which it hopes to have ready to launch in January.