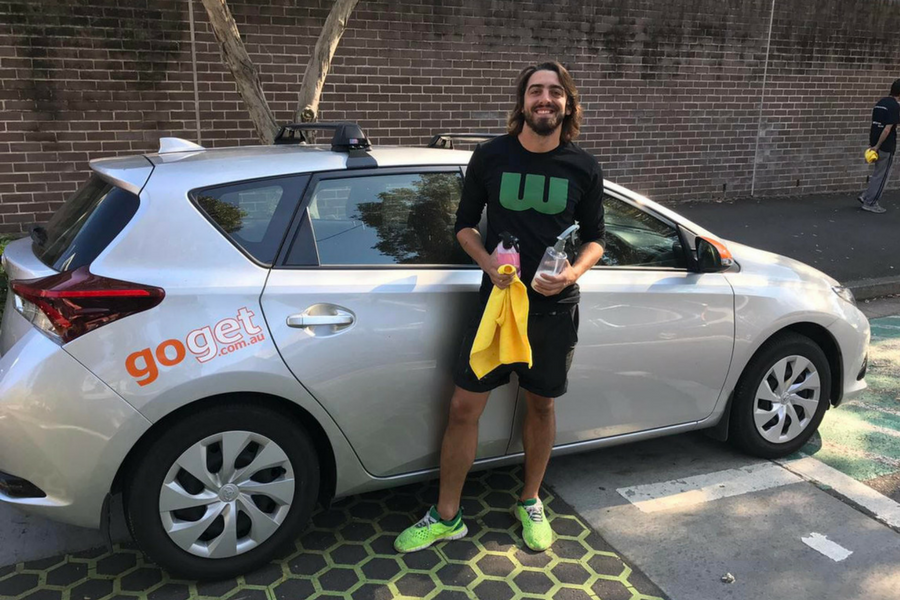 Harnessing polymer technology, WipeHero’s ‘wash and wax’ product allows for vehicles to be cleaned without the need for water. The startup states that the solution is scratch-free and also leaves a protective layer of the vehicle to protect against the sun and prolong the cleanness of the car.

Using the patented technology, WipeHero’s team of professional cleaners are sent out to a location to clean, bringing the carwash to the customer’s doorstep.

The startup also offers ‘fleet’ washing, where a team of cleaners are sent out to scrub a large amount of dealership vehicles, customers cars in a carpark and now GoGet’s car sharing vehicles.

Farid Mirmohseni, cofounder and director of WipeHero, said the partnership with GoGet to work with fleet vehicles came as a natural fit for the company.

“Working with GoGet is a natural fit because of our shared sustainability goals and expertise in large-scale fleet car washing,” he said.

The startup was established last year by Mirmohseni and Reza Keshavarzi, who were looking to eliminate the average 300 litres of water per car washed used by traditional bricks-and-mortar carwashes.

“The 18 million registered vehicles in Australia waste over 60 billion litres of water on car washing every year.” Keshavarzi said.

“On top of that we dump over 13 billion litres of contaminated sludge back into our stormwater systems which is toxic to the environment.”

GoGet’s Head of Fleet, Tim Kynoch, said the business was impressed by WipeHero and its sustainability efforts.

“We have a widely dispersed network of over 2000 vehicles and more than 90,000 members. WipeHero has impressed us with their efficiency and effectiveness. Their waterless technology aligns with our sustainability mission and gets the job done,” he said.

Beginning operations in Sydney, GoGet’s car sharing services has since expanded to Adelaide, Brisbane, Melbourne and most recently the ACT, after the company received backing from the ACT government last year.

Both GoGet and car share startup Popcar were provided with permission to trial their services in Canberra for a two year trial period, each receiving 11 parking spots around the city.

GoGet was met with a slow start in its first year, securing roughly 240 memberships by April last year, before climbing to 700 by June this year.

Looking to further grow its membership base, Vanneste expressed his interest in bringing the ACT government on as a GoGet business client.

“We are looking to assist the ACT government by helping them use carshare to save money on their mobility costs, and increase visibility of their transport needs. We would like to work with the government to further promote this service,” he said.

A spokesperson for Canberra’s transport minister Meegan Fitzharris responded by saying the government was open to any proposal issued by the startup.