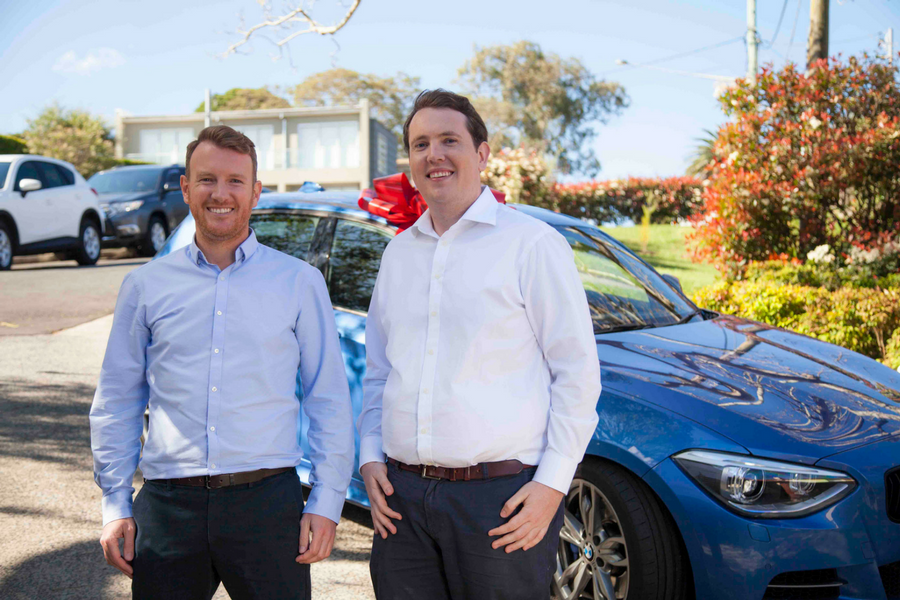 If online platforms ApprovalBuddy and TheCarTest have their way, buying a brand new car on the internet and having it delivered straight to the front door may become an expectation among car buyers – after all, who can resist the childlike thrill of seeing a giant bow attached to the bonnet of their new car?

To separate themselves from their competitors, the startup’s founders, brothers Paul and Michael Higgins, said the business aims to reduce the common and “expensive overhead” costs of purchasing used cars both offline and online, while making the buying process as transparent as possible.

In order to enforce transparency, HelloCars will complete a full inspection of each car before listing it on the platform, and guarantee to include all the necessary information about the vehicle’s state, beyond the expected kilometre count and general condition.

For delivery, Paul and Michael explained that delivery costs aren’t hidden at the end of a transaction or tacked on in tiny font like other platforms may do, but rather shown to the customer “upfront” – customers are able to allow enter their postcode to calculate delivery costs early on in the buying process.

“We thought it was a no brainer to deliver cars straight to a customer’s door and have the cost of it all really upfront on the website,” said Paul.

Paul added that the startup’s ability to serve customers across Australia with a straight-to-door delivery service was also key to separating the startup from its competitors like ApprovalBuddy, which currently only delivers within Queensland.

“For a lot of regional customers, it really broadens the choice for them. They often don’t have that many local dealers available to buy used cars, and those that do exist don’t always have every car model or lowest prices available,” said Paul.

The idea to develop an “transparent” online marketplace for cars that could deliver across state borders was not a new one, as Michael explained the idea for HelloCars came from seeing how US and UK startups were serving customers in the automotive industry.

“My background is in the automotive industry, dealing with manufacturers and dealerships. I saw a large gap in the market from a customer point of view, where no one was selling used cars very well, compared to the US and UK where there were a few different platforms offering an easy and transparent way for customers to buy used cars online,” Michael explained.

Bringing the focus on customer service to Australia, the startup was founded in 2015 before soft launching last year, where it sought to set a “really high” benchmark regarding the quality of used cars.

To ensure this, Paul explained that HelloCars will only accept cars that are less than six years old and have less than 100,000 kilometres clocked up. After this, each is inspected by the startup to ensure it’s up to scratch, a process which is currently only completed within and around Sydney.

“It’s not a consignment model, so we don’t take cars from an external dealer or anywhere else. Everything’s done ourselves, to ensure quality and security,” Michael said.

To sell a car, a customer simply enters their details online before receiving an estimated quote that the business guarantees is at least $1,000 better than what a dealer would offer, an offering Michael attributes to being an independent startup.

“We offer $1,000 more than a dealer since we don’t have to deal with all the other overheads such as expensive warehouses, dealer commission and things like that,” he explained.

Buying a car works in a similar fashion, where users are able to enter keywords of a car model they’re interested in or search using categories. Customers are then able to view a profile about the car that features all basic information in addition to all the details from the car inspection.

After purchasing a car, the startup organises for it to be bow-prepared and delivered straight a buyer’s door using either an internal or external delivery driver based on their location. Having formed a partnership with NRMA, the startup also offers free twelve months roadside assist with each car purchase.

“There’s also a seven day money back guarantee. So if they’re not happy with a car they buy, they’re able to return it, and if so, we’ll pick it up for them and take it back,” said Paul.

Since launch, the cofounders said the business has delivered cars all across Australia, as far as delivering to Perth and along the West Coast. Paul said HelloCars has also raised since this time help drive the startup’s growth, although the total amount was not disclosed.

Paul said HelloCars is considering additional investment to fuel its “ambitious growth plans” and become a household name across Australia.

“We’re looking at operational hubs out of Brisbane and Melbourne now to help our acquisition of customer cars and assist distribution,” said Paul.