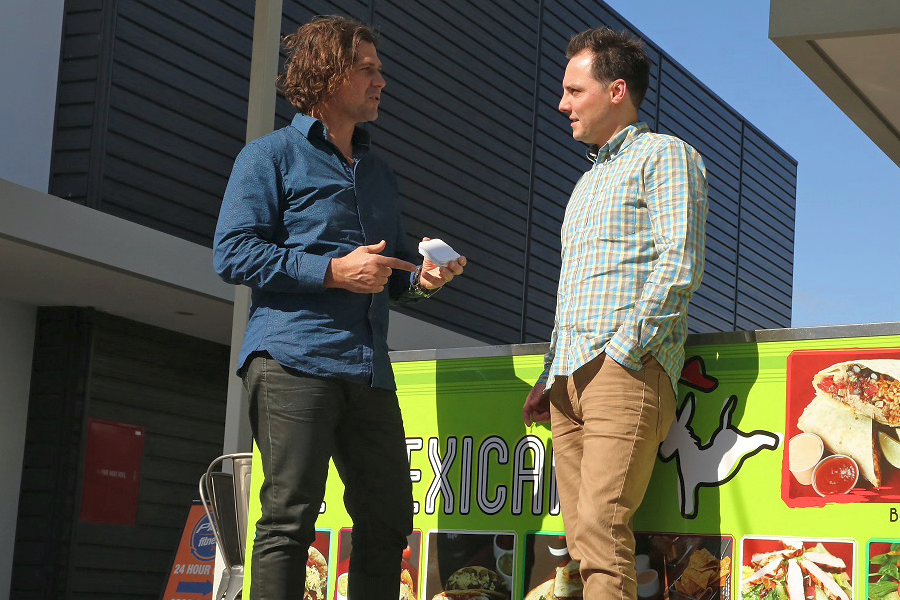 Marketing is a constant struggle for small business owners, who don’t have the time to spend on experimenting with all the different methods and ideas experts are constantly coming up with and urging them to try.

A number of startups are emerging to solve this problem, with the key seeming to be something the consumer treasures almost above anything else: free WiFi.

Melbourne startup PoweredLocal, for example, has created a system that has customers wanting to hook into a cafe’s wifi check into its Facebook page before they’re granted access, with the idea being that the user’s Facebook friends will notice them checking into that location, and keep it in mind next time they’re looking for a new café to try out – word of mouth in the digital age.

Yet another looking to solve the issue by taking it one step further is Perth startup Smartbeat, cofounded by Todd Sainsbury and Paul Trappitt, which has created a WiFi device and connected marketing platform that will enable business owners to capture data about their visitors and then conduct targeted marketing to get them coming back and spreading the word more often.

The idea for Smartbeat came from a WiFi business the cofounders were running a few years ago. Seeing that business owners were struggling with all the moving parts involved with trying to install various pieces of technology, Sainsbury and Trappitt would sort them out with WiFi through a standalone plug and play hotspot, with some advertising and social integration built in.

“While we were getting a bit of traction with that, we kept bumping into other opportunities around different spaces and different ways of using WiFi. We got involved with a couple of coworking spaces who were wanting us to put the WiFi in but what they really wanted more was more than just a landing page,” Trappitt explained.

From there Trappitt and Sainsbury began developing Smartbeat – originally Engagement Coach – with the idea of helping small businesses develop a community and get to know them better.

For businesses, Smartbeat works through a WiFi device to be installed in their store. With customers then connecting through the access point they are linked to a business’ social media, website, email list and so on. The access point device also enables presence analytics through mobile phone tracking, perhaps most easily explained as how cookies track our activity on the internet, but in the real world within a particular geo-fenced area.

From here, Smartbeat collects and analyses information about visitors, its dashboard then suggesting to a business owner specific actions to take in regards to marketing, for example targeting a particular segment of customers on a specific platform or through a specific medium on a certain day.

At the core of the Smartbeat service is the idea of identifying your most loyal customers and essentially making them your brand ambassadors, in a sense, and turning your occasional visitors into regulars and then into your ‘raving fans’.

“It’s about helping businesses understand that instead of having to go outside to look for new customers, they’ve actually got all these customers that are already around them,” Sainsbury explained.

For example, Sainsbury said, the average barista in a cafe might have 50 or 100 or so regulars that they know well. These regular, loyal customers are the cafe’s biggest asset – they probably have a couple of work meetings in the cafe, or might come by for breakfast with friends and family outside of work. Smartbeat wants to help facilitate greater word of mouth advertising through these customers online.

Of course, a cafe would also have occasional visitors, those coming in just once or twice a week, and Smartbeat wants to help turn those into daily regulars by helping the business get to know these visitors better, and entice them into coming back more often by targeted advertising or well-timed offers.

The presence analytics may help a business owner see how often a visitor is in the area, and how often they come in vs how often they just walk past, and suggest actions to take to get them coming in more often.

The focus, Sainsbury and Trappitt explained, is always on the consumer.

“You’ve got people saying presence analytics is a bit like big brother and that sort of thing, but that’s not what we’re trying to educate businesses about. We’re saying there is really cool technology out there that can help you to connect better with your customers. There’s people that aren’t interested and don’t want to give your their email address, so that email address isn’t worth anything to you anyway, so you want to find those customers that are even just slightly engaged,” Trapitt said.

“With those, it’s finding them and saying maybe, do you mind posting a review for us to move them from passer by, to visitor, to customer, to engaged customer, to raving fan. It’s just trying to move more people along that life cycle.”

Smartbeat raised $250,000 in seed funding late last year, with $200,000 coming from WA businesswoman Ruth Murdoch. Having previously received an innovation grant from the City of Joondalup, the startup has been working with the council to help businesses in the region.

The startup had been going out to talk to small businesses of all kinds over the last year, from the likes of golf clubs to pharmacies, cafes, and body shops before deciding to hone in again on its original focus on the hospitality space.

At the moment, the WiFi device costs $250, with access to the analytics dashboard costing $99 per month starting on a three month plan, with the cofounders saying that three months is a good length of time for customers to see whether the actions being suggested to them are working.

After working across Perth over 2016, Smartbeat will be launching Australia-wide this year.