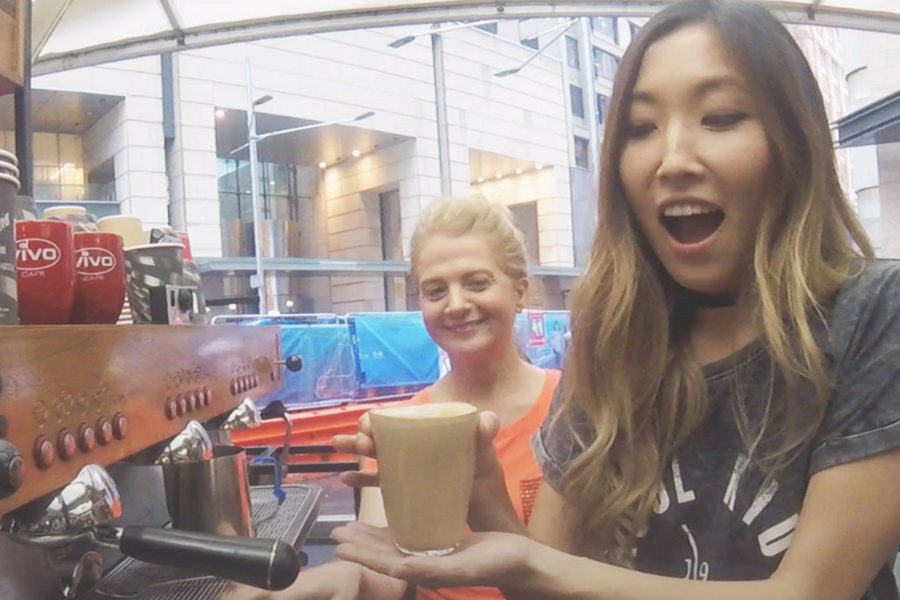 In early 2013 entrepreneur Angela Vithoulkas, well known for her various successful ventures and exits in the hospitality industry over the last 25 years and as a prominent voice for small business owners in the media, decided to launch her first tech venture: a radio station dedicated to Australian small business.

To be completely transparent, I was part of the team that helped to launch Eagle Waves Radio at the time, with Vithoulkas and myself hosting one of the first flagship shows in the line-up, Eagle Startups. This was initially broadcast live at 7.30am on a Monday morning from a humble make-shift studio in Camperdown that may or may not have been situated above a massage parlour for the gentleman who likes a helping hand.

As the venture began to take off, Vithoulkas started to realise the impact travelling back and forth from her city-based Vivo Cafe establishment, situated at the opposite end of George Street, to broadcast several shows was having on her time. So, she decided to get creative and had a purpose-built radio booth created and placed inside her busy eatery which, prior to current roadworks and construction, had weekly foot traffic in excess of 400,000 people directly passing by.

The noodle-box shaped radio booth became a talking point for customers and the headquarters for what would eventually be a growing list of live digital radio programs spanning startups, technology, enterprise business, politics, entrepreneurship, and other SMB-related content.

In my opinion, it would be fair to say that the concept was ahead of its time as far as the creation of audio content goes. The biggest learning from those early years for Vithoulkas was that Australians, and indeed the world, were moving rapidly towards an on-demand culture when it came to content, full stop.

This essentially rendered the live-play that the startup launched with redundant in late 2015/early 2016, when statistics clearly showed audiences had a preference for accessing the content post-broadcast when it was made available on iTunes.

Seeing the increased interest across the U.S. from companies wanting audio content via the rise of outlets like Gimlet Media, which produces both original and branded podcasts, Vithoulkas decided to pivot and reposition the Eagle Waves Radio brand in the Australian market as a podcast production platform and distribution partner.

Sticking to the niche that Vithoulkas knows best – small business – she has also partnered with complementary media organisations such as this publication, Startup Daily, its sister site Silicon Paddock, and the SME Association of Australia; teamed with the platform’s existing database, these partnerships have enabled the brand to relaunch to a reach of over 150,000 business owners, startup founders, corporates, investors, and public servants.

Currently the startup is in the process of preparing and recording a string of new podcasts that will launch publicly across the platform soon. They will also be available to download on iTunes and other popular podcasting platforms like Stitcher and Soundcloud.

“We are confident that our new [go-to-market approach where we have focused on the] convenience factor of podcasts, and the ability to listen on-the-go will really appeal to our business audience,” said Vithoulkas.

“The partnerships we have put in place with other media organisations should in turn help us reach other demographics with the professional space.”

The first podcast to launch on the platform, The Brew, is supported by Vittoria Coffee and is available in both video and audio formats.

The show, hosted by Vithoulkas, is centred around high profile business owners, personalities, and politicians kicking off every episode by getting behind the counter at Vivo Cafe and making their signature coffee before sitting down for an in-depth one-on-one conversation that looks at career, personal life, challenges, and success.

The Brew launched its first episode last week with entrepreneur Jane Lu, founder of online fashion powerhouse Showpo.com – which was fitting as Lu was also one of the first ever guests to be interviewed on the startup-focused program when she first launched her company. Showpo now has an annual turnover of $25 million in revenue.

On why Vithoulkas felt that The Brew was the right podcast to launch the new platform with, she said that as a small business owner for over 30 years and an elected local government Councillor (sitting on the City of Sydney Council), she knows ‘success’ is not something that occurs overnight, and it is important to hear unfiltered conversations that explore that side of reaching goals and career highlights.

“Our guests have interesting tales that reflect their individual drive, humour and never-say-die attitude,” she says.

“Their personal journeys show our listeners that reaching these goals often go hand-in-hand with the highest of highs and the lowest of lows.”