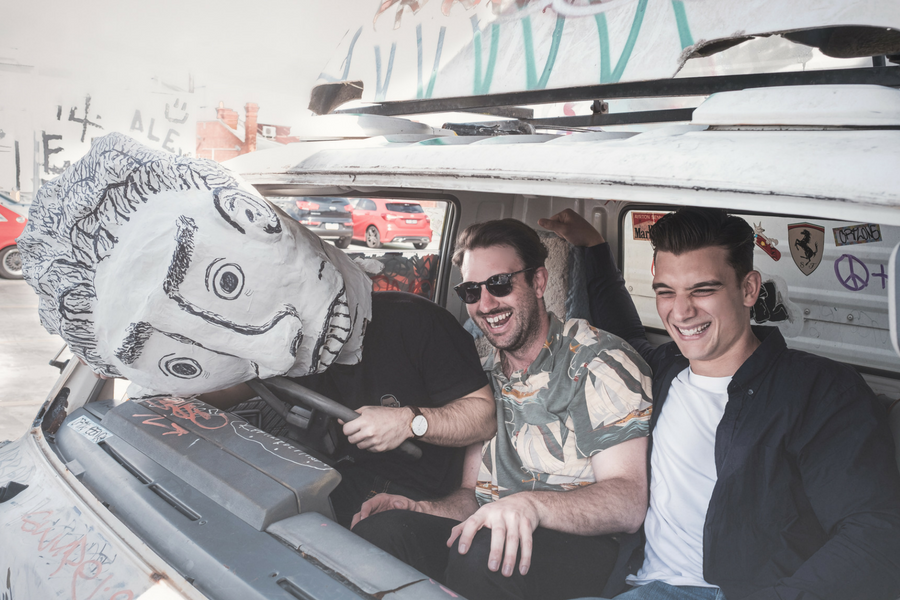 If there’s two things in this world that Aussies love it’s beer and burgers, with a recent burger craze seeing burgers transform into larger than life meat towers.

Our love of them is here to stay, with burgers outlasting the Pokemon obsession and many a new burger joint popping up around Australia.

Entrepreneurs and friends Aaron Rocca and James Collins believed the new burger addiction needed a directory and so they created an app called Burgerhead, which they’re dubbing the ‘Tinder for Burgers.’

“Sitting down one day at our local, we both honed in on the idea of creating an app for only burger reviews. One of us being in the construction game and the other in hospitality, naturally we laughed it off as we didn’t know the first thing about technology,” said Rocca.

“For kicks on a tiny note pad we started sketching what it would look like. Three hours later we starting getting serious about the idea.”

Rocca explained that going out in Melbourne for a burger became just as common as going out for a coffee. For foodies it’s important that the money you pay for a burger, whether that be $10 or $20, is worth it.

First launched back in 2014, Burgerhead came into market as a review app for burgers. However, after becoming more popular around Australia, the team began to develop additional features and opted for a new interface.

Burgerhead has now been updated to include Tinder-like features that allow users to swipe right or left: right for the burgers they would eat and left for those that look not so tasty. The app starts with locating the users top-rated local burger venue. Users are able to add in their favourites and leave a review for those not yet popular venues.

The Tinder experience has proven to be especially popular for any industry where good pictures or ideas sell. The Tinder model is currently being used by companies like fashion startup Stashd, dog connecting platform BarkBuddy and job matching app Found Careers.

“We believe James spent a lot of time on Tinder just for research purposes. The Tinder user experience is proven simple and easy for a user to pick-up and find who and or what they are looking for. We just wanted to take the same approach for those on the hunt for buns,” said Rocca.

The app is free for users to download and along with generating Australia’s largest burger appreciation community, the app also offers a review platform so users can rate their dining experiences.

So far Burgerhead has been bootstrapping and the team is not yet looking to monetise. Rocca explained that once the app becomes more established the team will look at marketing strategies from the likes of Zomato and TripAdvisor.

“We believe in the old saying ‘if you build it, they will come’, so we are initially interested in building a great product that people see true value in,” said Rocca.

With both cofounders having their own full-time jobs outside of the startup, the biggest challenge has been structuring their time to fit Burgerhead into their lives.

“Coming home from the 9 to 5 and jumping on the back end, discussing new ideas and working out how we’re going to grow is always a challenge, but also super fun.”

Over the last 12 months Rocca said the team has learned a lot about technology and the power of social media.

“At the start we could barely use Microsoft Office, now we’re deep involved with code and identifying bugs and data collection.”

As an initial passion project, Burgerhead’s success has come from venues championing the app and using it to promote themselves to the wider community.

Over the next 12 months, Rocca said Burgerhead will be focused on growing its brand by partnering with food deliver services and increasing its daily users via social media.