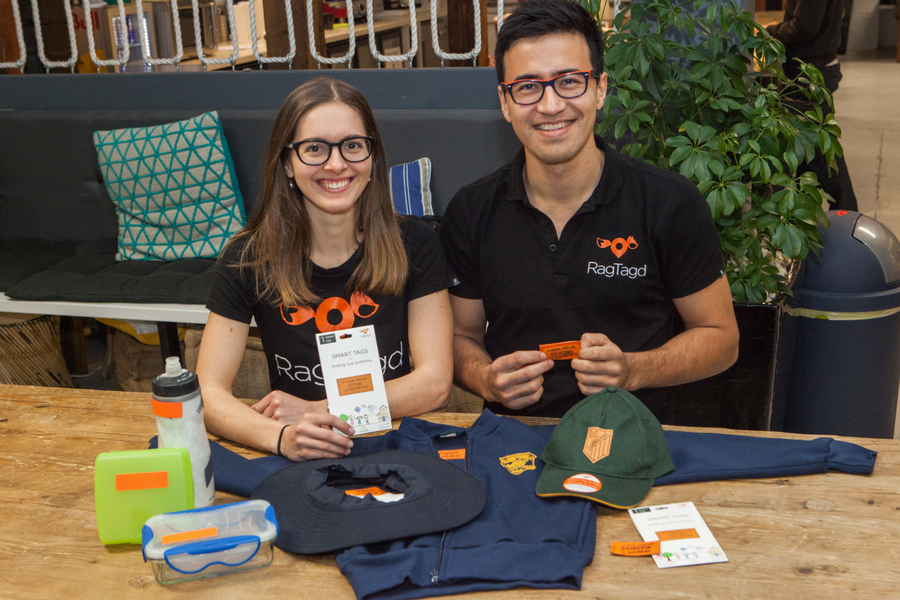 Scouring through a lost property box to find a lost item is a nightmare, especially when the item looks identical to everything else. Children and their parents in particular can spend hours looking for a lost hat at the school’s lost property department and if there is no name on the item then this can be an impossible task.

On average parents will spend $600 on clothing, accessories, school supplies and computers in the weeks leading up to the beginning of the school year. Replacing lost items is costly and trying to find them around the school is time consuming. Of course, if you can remember back to the time at school when the mantra ‘no hat no play’ really meant ‘no fun today,’ then losing a hat was more than just losing money.

Sydney startup RagTagd is now offering parents a solution to help find their child’s lost property, replacing the age old tradition of writing a name on a jumper with a technological device.

Founded by millennial entrepreneurs Eugene Holdenson and Chloe Blattmann, RagTagd is a smart tag that helps parents find their child’s lost property at school. The smart tag can be attached to any school item like a uniform, lunch box or bag and can detect those items if ever they are lost and find their way into the school’s lost property box. When a tagged item shows up in lost property the child’s parents receive an automatic text message to inform them that the item has been found.

Blattmann believes that at any one time schools can have over $1000 worth of lost uniforms waiting to be claimed. While it’s obviously annoying for the parents to dig deep into a pile of lost uniforms, the process also puts a strain on the school’s management system.

“What our system does is takes the burden out of lost property with notifications easy enough for them to come in the next morning and pick up their lost item, where it will be at top of the pile. In doing so lost property becomes self managing, essentially,” said Blattmann.

The smart tags work through passive Radio-Frequency Identification (RFID), which uses radio waves to read and capture information on a tag that is attached to an object, in this case a school uniform. Passive RFID uses no internal power source and is commonly used for smart labels, file tracking and supply chain management.

Blattmann said this form of technology is not yet common in consumer technology but explained the system is similar to Near Field Communication (NFC); however, with RagTagd, instead of tapping the tag against a sensor the sensor scans the entire area and can detect when a tag has entered the lost property location.

RagTagd also coordinates with the school’s uniform supplier, so that tags are automatically sewn into the uniform before purchase. Upon purchase parents receive an activation code, where they can link their tag to their mobile number to be alerted when items end up in the school’s lost property system.

As school uniforms can take quite a beating, especially those worn by infants and primary school kids, the tags are both waterproof and iron proof. As the tags don’t require a battery, they are lightweight and sit just below the neckline or in the seam of a jacket.

In terms of second hand uniform sales, RagTagd has implemented a changeover process. In order for a new owner to swap over the activation of a tag, a previous owner must confirm via text message to approve the item no longer belongs to them. Blattmann said schools are also provided with a portal to deactivate tags and when items are not claimed they can sell them for second hand.

Currently RagTagd has 10 schools on board with the smart tag system, including Chatswood, Ryde and Roseville primary schools. Blattmann said the startup is looking to first target Sydney before expanding to other states around Australia.

RagTagd has also just closed a $400,000 investment round, which will help the team focus on targeting the wider market. However Blattmann explained that while the team is currently focused on lost property items, the technology they are using has a whole range of applications, for instance healthcare.

“This is something that we hear from people all the time actually, on how dementia patients can be a problem in nursing homes. They go wandering and it’s important to know if someone has actually managed to get out because they need to take care of the patients.”

RagTagd has also thought about how the tag system could work for public transport and the lost property found on trains and buses. Blattmann said the team has closed a deal with Transport New South Wales to put their lost property sensors in two major bus depots, Willoughby and Waverley.

“Not only is this great for our growing network of schools, it also enables us to run early trials and testing with a consumer version of RagTagd,” said Blattmann.