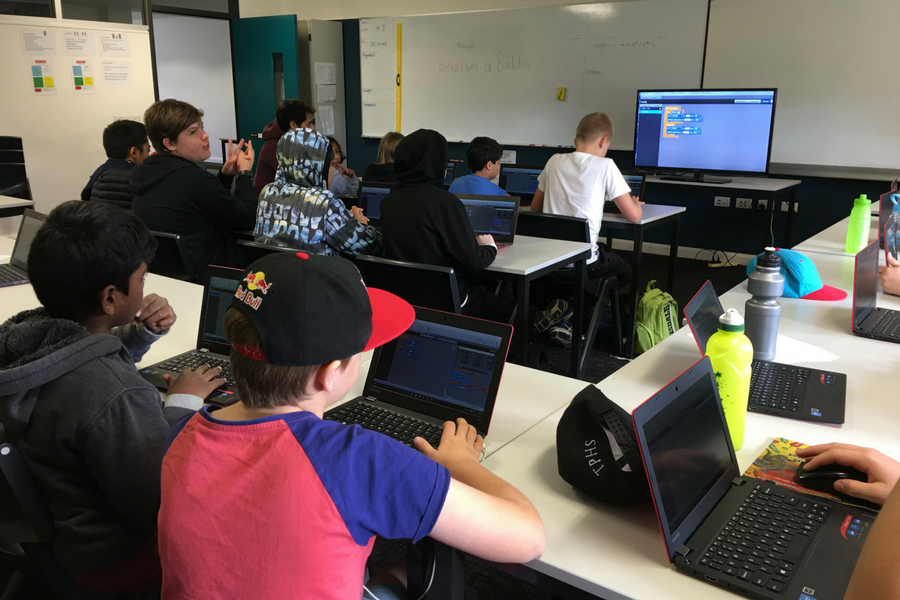 Teaching kids to code is very much in vogue right now, but for the most part it’s adults who are driving the charge. Approaching the field from a new angle is Joshua Brooks, the fifteen year old founder of CodeSpace Education, an organisation running short courses, or camps, during the school holidays to teach kids to code.

Brooks is a particularly interesting founder for such a program, with CodeSpace Education already his third successful business. He started out in primary school by helping to organise activities for school fetes, building mini golf courses with his family to take to the events to help organisers fundraise. When he got to year 7 and saw his high school didn’t run fetes, he decided to make a business out of the equipment, hiring out the mini golf course and a few games. In year 8 he then started a laser tag business.

The idea for CodeSpace Education then came to Brooks from a lifelong love of tech inspired by his father’s work in the field.

“I inherited a liking of computers and that sort of stuff from him, it’s always been like a hobby, I’ve got a set up at home and everything, and I figured it’s something that I know quite a bit about, and one day at school I was talking to some friends and they said, you know what would be cool? If you did a school holiday workshop where kids got to make their own games,’ and I thought, yeah, that would be cool. So I looked it up and that’s basically how I got into it,” Brooks explained.

While acknowledging the work of organisations such as Code Club Australia, which holds after school sessions with kids, Brooks said he wanted to provide an alternative to traditional school holiday care options, which mostly see kids sit in school halls doing random activities – fun, but often repetitive and not exactly full of learning opportunities.

Instead, CodeSpace has brought together engineers, game designers, and animators to develop run a number of two day camps for ‘first timers’ and those taking the ‘next step’ in their learning about technology, with camps run for game design and robotics.

The first set of camps ran in the school holidays last month, with almost 40 kids spanning the ages of 8 to 14 taking part across two 2-day courses.

As well as the tech side, key to the courses too is helping the kids create friendships, with time set aside for other team bonding activities.

“We want to do something that will set us apart from the competition and so we’re really focused on the experience of the kids, that’s how we market it. I want a great experience for the kids, while making it really educational at the same time,” Brooks said.

The work Brooks has been doing has already caught the eye of some bigger players in the tech space, with BlueChilli inviting him to do a week of work experience in their Sydney office in June.

“I was seeing where I could apply all the knowledge to my own business. My focus was on learning as much as I possibly could in a week. I was talking to a lot of people, saying, ‘this is my website, how do you think I can improve it? How do you think I could improve this service? I’ve just been trying to learn as much as possible,” Brooks said.

So what drives Brooks to go about the stressful task of building several businesses while he’s still in high school?

“To me, all of the business and all that sort of stuff is just one, big, giant, complicated game. There’s a lot of strategy, a lot of thinking, and I quite enjoy doing it, and that’s really what drives me, just a love of creating everything. Creating new things and trying new ideas; there are never two days that are exactly the same because I’m always doing something different every day,” he said.

“I try a lot of things and a lot of them do fail, but I just keep trying and eventually I do usually get one or two that do succeed and then I use that money to do more.”

The idea of pushing past failure is something Brooks hopes to impart to not only participants at CodeSpace camps but his classmates and other young people, too. After all, despite all the talk from government and other organisations about teaching kids entrepreneurship, doing is a different story.

“I really just want to say is that it is possible. It is sometimes harder when you’re young, but you’ve also got a few advantages, so what I really want to say is, to other young people who want to start businesses, just go for it. If it fails, don’t worry, try again.”

CodeSpace is running camps at Sydney Technical High School and The Ponds High School in Sydney during the upcoming school holidays.