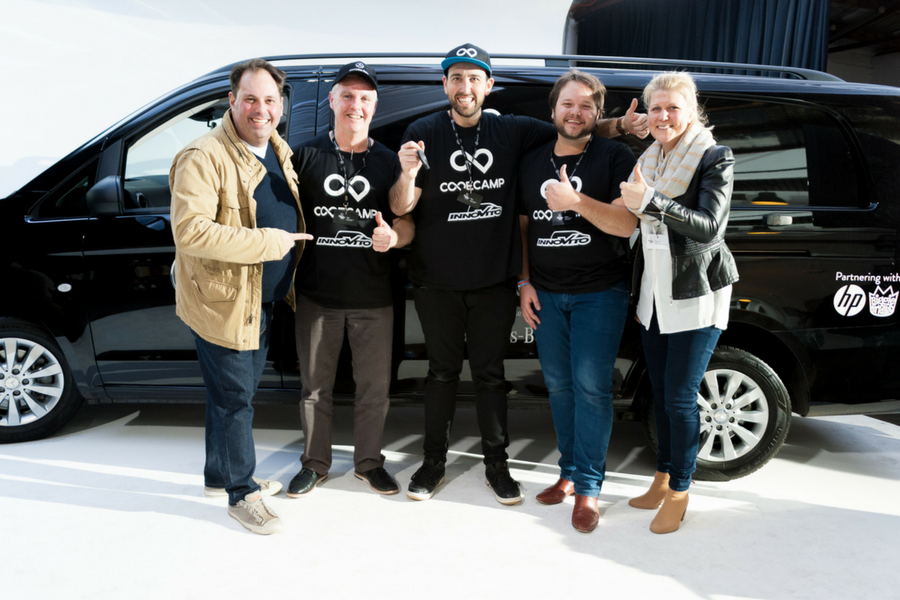 Edutech startup Code Camp this weekend won Mercedes-Benz Vans’ Hack My Van competition, to bring coding classes to Australian students in rural and regional areas. In the next 12 months Code Camp will use its prize of the Vito van to travel to remote areas such as Arnhem Land to teach kids the skills of the future.

Code Camp began as a hobby in 2013 and in the past 18 months has grown to teach more than 8,000 students how to write code. The startup has run beginner and advanced camps for students in years 2-7 on how to build apps using logic, computational thinking, user experience, creativity, and problem solving.

Code Camp was one of six finalists chosen to participate in the one day hackathon to reimagine the inside of a Vito van. The judges assessed ideas from a biohacking lab to a mobile pet photography studio, an on demand 3D printing workshop and a rubbish to product recycling van.

Diane Tarr, managing director of Mercedes-Benz Vans Australia and New Zealand and one of the judges for the competition, said she was blown away by the level of creativity and the brilliance of the business ideas of the six finalists.

“This is precisely why we created this event ,as we are excited by the ideas and possibilities for how the Vito van can be reimagined to transform an existing business, or completely reinvented to create new businesses,” she said.

A brand new Vito van was awarded to Code Camp by the Victorian Minister for Small Business, Innovation, and Trade Philip Dalidakis. Code Camp will be using the Vito van to travel around Australia to reach its goal of teacher 100,000 students to code. Cofounder of Code Camp Ben Levi said the startup is on a mission to teach Australian students to code and build engagement and passion for technology.

“To have our own Mercedes-Benz Vito, Code Camp will be able to expand a lot faster to teach more students in more remote areas, and it will allow us to run pop-up events all over the country to raise awareness,” he said.

“Code Camp aims to build a more innovative future for Australia, and having Mercedes-Benz, one of the most innovative automobile makers in the world behind us is incredible.”

Levi said the startup will have a specific focus in Arnhem Land and with the assistance of the Foundation for Young Australians will provide students from all socioeconomic backgrounds the importance of digital technology.

Recently teaching students of all ages to code has been a focus for many edutech startups who want to see coding as a major subject in all schools around Australia. In July this year Code Club Australia set the world record for most kids coding at the same time at the MoonHack event.

The event saw 10, 207 kids across the country take part in a series of online computer programming exercises related to science and astronomy, with Code Club Australia general manager Kelly Tagalan saying Moonhack was the first event of its kind to both capture the imagination of kids across the country and improve digital literacy at the same time.

“Learning to code gives children to be ability to control, not just use, technology. It’s one of the most important lessons they can learn for the future. Code Club Australia wants to make sure that every Australian child has the opportunity to learn how to code, and we are overjoyed that Moonhack was able to reach so many families around the country – and even overseas,” Tagalan said.

Both Code Club Australia’s world record and the initiative of Code Camp come at a time when the conversation around getting kids to code has never been louder. In January, Melbourne startup Code the Future launched an ambitious plan to get 10,000 Australian school students coding by the end of the year, a plan that also coincided with an endorsement of the new Digital Technologies subject that is to be introduced into the Australian curriculum this year.