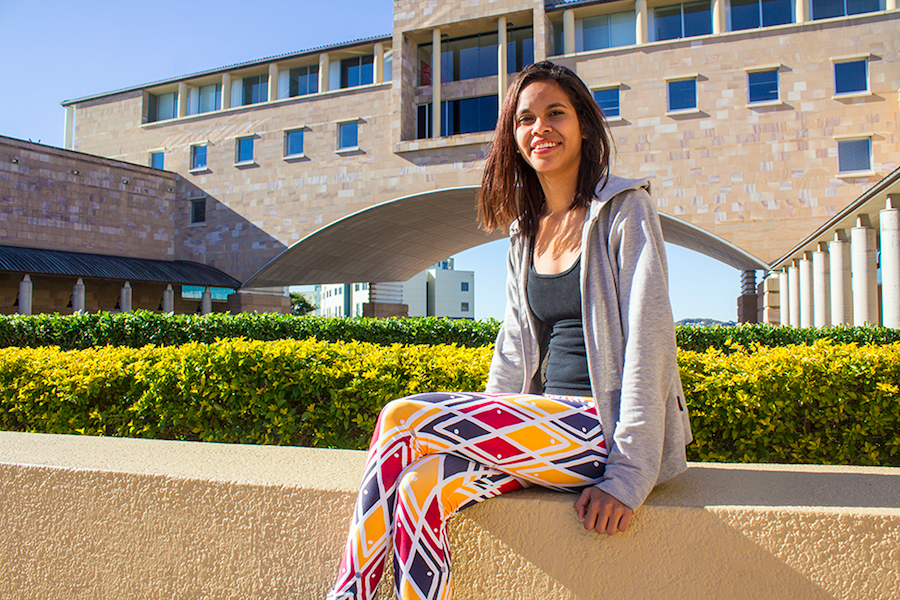 Activewear is all the rage, with everyone from Beyoncé to Kate Hudson and Carrie Underwood creating their own ranges of workout clothes that yogi, joggers, and café lovers pay a premium for.

Though activewear may be seen as slick and modern, scientifically designed to make working out as comfortable as possible, Queensland university student Alisha Geary has been inspired to blend the old with the new and is set to launch Faebella, an ecommerce platform selling a range of activewear featuring the work of Indigenous artists and their stories.

Geary said she was inspired to create the business through her time as an art tour guide at the Corrigan Walk at Bond University, the largest private collection of Indigenous art in Australia, where she was taught the stories and meanings of the artwork and passed those stories on.

These stories and the culture these artworks speak about and represent are important to Geary: raised by her Torres Strait Islander mum, Geary said she never really had the chance to learn much about her father’s Aboriginal culture, and when events such as NAIDOC happened at school she would throw myself into them to learn as much about that side of her background as she could.

“It wasn’t until I was taking visitors through the walk that I could truly appreciate the beauty of the art work and its significance in keeping our culture alive,” Geary said.

She said she looked at some of the contemporary artworks and wondered, why isn’t this on a dress? While she doesn’t call herself a diehard fashionista, Geary said she would daydream about the dress that could be made from one particular artwork by Utopian artist Gloria Pehjarri.

“The idea began to develop from there. I wanted to create a clothing range that sourced artworks from artists all over the country to get their stories out and to share the stories behind their art as well. This is because I wanted to get people, visitors to this land, just like the visitors to the Corrigan Walk to appreciate and understand the beauty behind not only my people’s art but also our culture,” Geary explained.

Though her daydream was of a beautiful dress, Geary said she chose to look at activewear because, while it’s a $2 billion industry, it offers one of the “blandest” fashions.

“Indigenous art is bold, eye-catching and meaningful…I’m excited to paint some life into this clothing style and inspire people to live with purpose as I have since I’ve found Faebella,” she said.

Geary’s vision is to sell a range of activewear and related products such as yoga mats online, with a tag attached to each product which features the story behind the artwork and the artist, much like you can find in shops selling Indigenous art.

From coming up with the idea around six months ago, Geary was accepted into the Bond Business Accelerator for early stage startups, with her focus on validating her idea and enlisting Indigenous artists to create for the range. Her MVP was created through the help of Narelle Urquhart, an Indigenous artist who lent Geary a piece of her art to print onto a pair of tights and also helps manage the Nyombil Centre, the university’s Indigenous support space.

With artists interested in the concept, the most challenging aspect Geary has been working on its nailing down the supply chain, with high quality materials and production key as the range will be sold at luxury pricing.

So far Geary has been able to self fund the development of the business, which has mostly been the production of her first sample and website maintenance. However, acknowledging the spending most likely necessary ahead, Geary said she has been applying for business scholarships and entering competitions to win funding to order her first run of tights.

“The plan is to launch yoga mats with Aboriginal and Torres Strait Islander art designs on Kickstarter after this first campaign to raise more capital, but also to drive traffic to my website to introduce the active wear range to people,” she said.

There is definitely huge competition in the space – the aforementioned activewear ranges from the likes of Beyoncé and Kate Hudson, for example – but it is also true that a compelling story goes a long way to convincing people to pay top dollar for products. The Aboriginal art market itself too has grown to be a big business, with a turnover of $26 million in 2007.

The product range is set for release over the next few weeks.