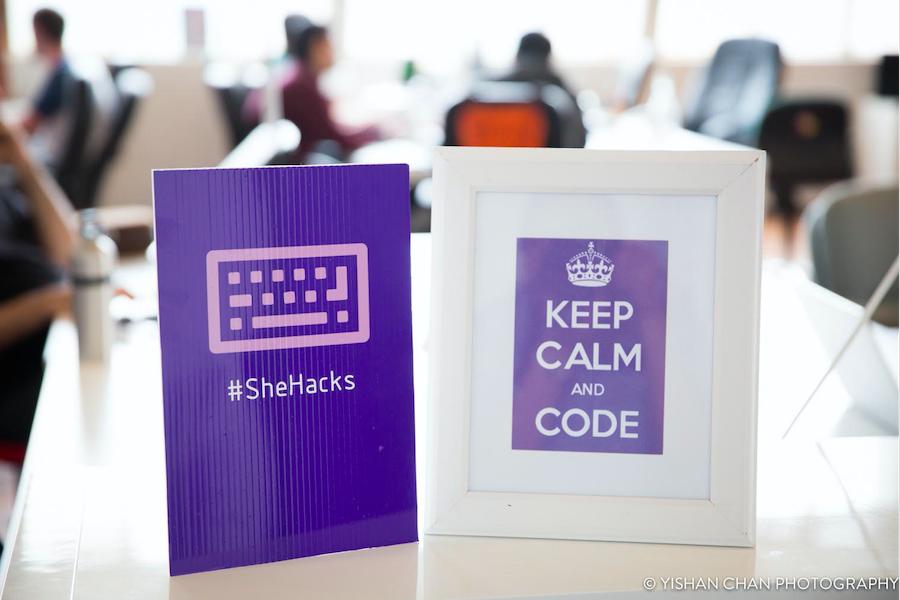 Forty hackers, hipsters, and hustlers took part in SheHacks, with seven teams formed to solve a variety of problems. Though there were no set problems or issues given to the teams to tackle, organiser and Girl Geek Academy cofounder Sarah Moran said most chose to focus on creating businesses that serviced either social, economic, or other needs of women.

“I was overwhelmed and nearly brought to tears from the moment the first pitch came across,” Moran said, highlighting the pitch given by UX designer Danya Azzopardi of Sticks and Stones, a corporate team from Deloitte Digital.

“The first words out of Danya’s mouth were, ‘I was 7 years old and I was called a bitch, and I had to ask someone what that meant; I was told I was a female dog, and that that was not a good thing.’ She talked about other times that had happened in her life and the importance of language, so the team created a program that focuses on measuring the impact of our language from an early age, targeting young women in schools. We had an assistant principal in the audience who said, ‘I’ll use that tomorrow – these women don’t know the power of what they’ve just created.’”

First prize as judged by the all female panel of Timelio cofounder Charlotte Petris and VCs Samantha Wong, Eloise Watson, and Bonnie Tran was given to team Hackolades, a platform allowing people to show off their latest coding creation and receive the ‘hackolades’ they deserve.

Runner up went to SheCounts, which wants to help mums returning from time off work to find jobs in the tech industry, while Sticks and Stones took out the Creative prize.

With the goal of SheHacks events being to help women build their networks, Moran is confident that, like previous years, a number of teams formed over the weekend will go on to work together in the future.

“What we find with SheHacks is that it often isn’t the business they try to build over the weekend but the fact they’ve formed a support team to create a new business or project in the future. We’ve seen that happen in the past and we think we’ll see that again,” she said.

The network building and collaboration was similarly in full flight at Fishburners – and across the two events, with messages of support sent from Sydney to Melbourne – where over 100 women packed into the Harris St building to work on new businesses, helped along by mentors including OneShift’s Gen George, Colette Grgic and Catherine Eibner of BlueChilli, and Google’s Sally Ann Williams.

The Female Founders hackathon, which saw 78 participants form 16 teams, is the first in a new series for the coworking community, Weekends at Fishburners, with CEO Murray Hurps saying the goal is to find people who would make incredible startup founders and give them a weekend where they can come together and be surrounded by other people like themselves to work together.

“Then, on Monday it’s hopeful that they’ll end up with a three-day old startup that might become a four-day old startup, or at the very least learn a whole bunch of skills that could put towards their own startup,” he said.

The new event series is not a “charitable thing”, Hurps said, but rather it is looking to highlight the fact that there are significant, currently untapped opportunities in a number of demographics, such as regional and rural founders.

“We had to start somewhere and female founders are a really nice and easy opportunity,” Hurps explained.

Hurps estimated that around 90 percent of the participants over the weekend were new to the tech and startup space.

“The most amazing this was that there were so many PhD candidates and people that have had amazing biotech careers who were saying, ‘I’m not a tech person, but I understand a large problem and I’m going to use this weekend to try and find a solution and pursue that,’” he said.

“They see that you don’t have to be this amazing tech person to come up with something scalable. You can certainly benefit from having tech people on your team, but the main thing is what you’re aiming for and whether you are using the opportunities of today to capture a large market.”

Like the SheHacks teams, Hurps is confident a few from the Fishburners event will continue to work together, with one already completing a term sheet and going in to register their business this morning.

“It was an incredible outcome and I’ve been to a lot of hackathons, but this one was very notable for the level of collaboration and cooperation between the teams. I don’t want to make it something cheap like it’s a female attribute but I think part of it came from the fact we didn’t have prizes, we didn’t have a Dragon’s Den at the end, we we focused on filling the building with really talented mentors and having sessions and treating it like a learning experience and having a practice run for entrepreneurs, rather than a hot house of competition over a weekend,” Hurps said.

“Both of them can be good for different things, but this weekend was fantastic for facilitating the first steps into being a startup founder.”

The tech space is still notoriously difficult for women, but the weekend shows the future is bright. As such, looking to ensure Girl Geek Academy continues to build on its work, Moran has been named CEO of the organisation.

She said, “I’m the hustler of the group, it’s my job to hustle, and I can afford to do that full time for Girl Geek Academy. I have a fire in my belly and this is what I’m dedicating my time to, but there is also a very clear invitation to anyone who wants to help more women build the internet to reach out and see how we can work together, because we need help.”