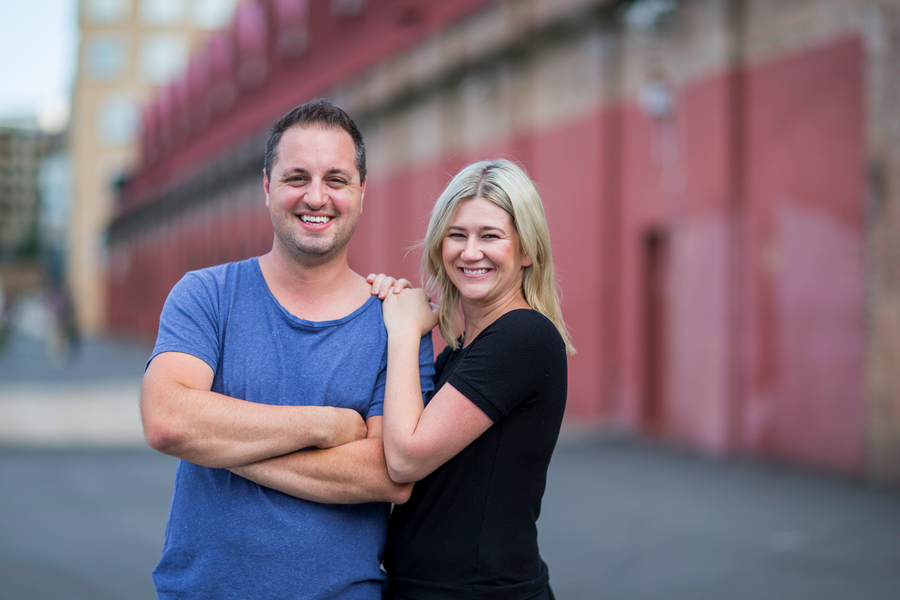 I’m not generally a fan of reality television, but I can’t get enough of Say Yes To The Dress. There’s something about watching brides-to-be find their perfect dress, and going through that journey with their closest family and friends, that I love. The bit where the stylist thinks they’ve found the one and asks whether they’re going to say yes to the dress? My favourite bit.

After the big day, however, the dresses are put into storage, often never to be seen again. Sydney startup Still White believes these dresses still have life in them and that there are women who would love to give them another big day.

As far as startups go, Still White may in fact be one of the oldest hanging around Sydney coworking hub Fishburners – but they only moved in last year ago. Founded by newlyweds Bruno and Ingrid Szajer shortly after their wedding in 2010, Still White helps women sell their used wedding dresses to brides-to-be.

The idea, of course, came from their own experience, with Bruno asking Ingrid what she was going to do with her wedding dress as it was being stuffed under the bed.

“The dress was a small fortune and after drycleaning, it was still in perfect condition. Unimpressed by existing services, Bruno couldn’t help himself but build a dedicated platform which allowed brides to sell their wedding dress,” Ingrid said.

She said they “cheated” in developing the platform, the first version essentially a copy and paste job of the code that Bruno had written when building mrplates.com.au, a marketplace selling custom number plates, a few years earlier.

Given we’re accustomed to buying anything and everything online now, it can be hard to remember what the ecommerce landscape was like six years ago and just how far it’s come, particularly when it comes to consumer attitudes towards online shopping. Back in 2010, Ingrid said she and Bruno were convinced brides would not want to transact online, so the first version of the platform simply helped buyers find dresses for sale locally so they could meet the seller, try on the dress, and pay for it in person.

Of course, attitudes change and now half of Still White’s transactions happen online.

“By building our own chat system and integrating with a large payment platform, we’ve been able to overcome challenges with privacy, accepting payments online, postage and trust around the dress actually arriving in the mail,” Ingrid said.

The cofounders began getting customers on through Google Adwords. With listings free upon launch, they got 100 dresses on the site within a month and then started charging. Users can choose to pay for either a $29.95 listing, which gives them unlimited free edits, four photos, live viewer statistics, and having it listed until sold, or $49.95, which has their dress featured on the home page and gives them ability to showcase eight photos.

Still White took this model overseas, launching in the UK, US, New Zealand, and Canada within six months.

“Back then it was all about CPC marketing, but today we rely on organic growth. When we see a spike in traffic from a particular country, that becomes our next target. Currently the US and UK are our biggest international markets,” Ingrid explained.

Given the price of dresses, it’s easy to understand why a woman would want to sell hers on and recoup as much of that cost as she can once her wedding is over but, again, given the meaning of the wedding dress for a bride, whether brides-to-be would accept the idea of second hand dress could have posed a problem – there’s nothing wrong with second hand (sorry, pre-loved) clothing, of course, but unless they’re passed down from mother to daughter and so on, in most cases a bride will buy her wedding dress brand new.

While this may ring true for some, Ingrid said it hasn’t posed a problem for the startup.

“Still White buyers are a savvy bunch, looking to stretch their wedding budget further. We find if a dress has been dry cleaned and comes from a happy home (or sometimes even brand new), buyers are very open to the idea of buying second hand, especially if they get to wear their dream dress they could otherwise not afford,” Ingrid said.

“Besides, their wedding guests will never know.”

To date brides have sold over $10 million dresses on Still White, which equates to more than $400,000 worth of dresses being sold each month at an average rate of 10 a day, and growing, Ingrid said.

“This is almost double the same period last year. Although the average sale is $1,500 we recently had a J’Aton dress which was worth at $30,000 sell for $15,000. A seller can stand to make over 50 percent of the original retail price, from a dress that’s less than two years old,” Ingrid explained.

The Szajers have bootstrapped the business since launch. They both had full time jobs until mid last year, able to run the platform after hours thanks to the fact that they had automated as many processes as possible. Seeing how big it had grown, they eventually made the decision to make Still White their main focus and moved into Fishburners.

Looking ahead, Ingrid said Still White is currently developing a tool to help brides calculate what their wedding dress is worth based on previous sales data. Their big goal is to reach $1 million per month in sales globally within the next year.