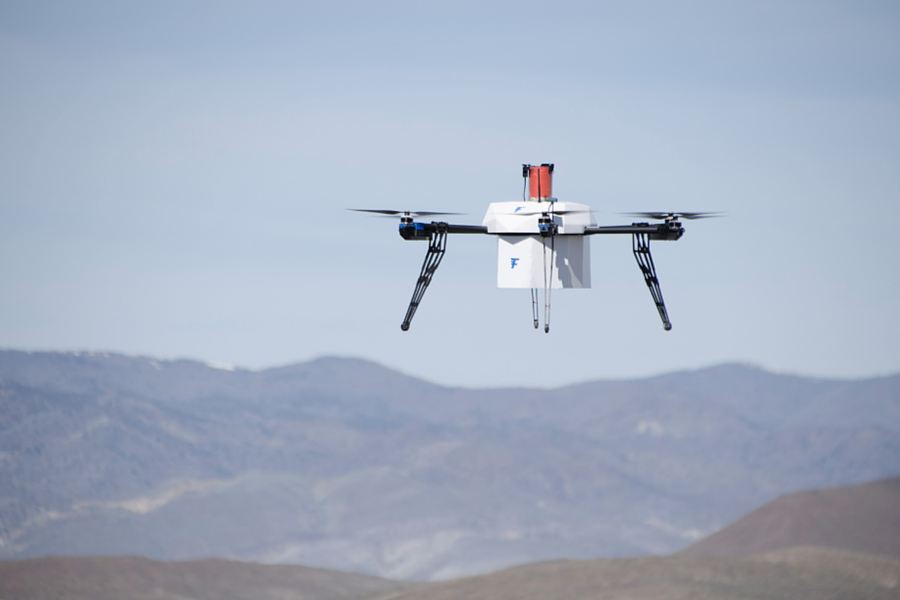 Independent drone delivery service Flirtey has today announced it will be conducting its first ship-to-shore delivery to the US. The delivery will showcase the humanitarian potential of drones for the United Nations and the American Red Cross, among other participants.

“Imagine a future where in the event of a natural disaster like Hurricane Sandy, Flirtey drones rapidly deliver emergency medical supplies, food and water,” said CEO of Flirtey Matt Sweeny. “This demonstration is helping to make that future a reality, and taking us one step closer to Flirtey’s mission to save lives and change lifestyles.”

For the event Flirtey will be collaborating with Dr. Amukele of John Hopkins University School of Medicine, who has led successful research on the viability of using medical drones to transport blood samples and products. Dr. Amukele is now serving as a volunteer advisor to the Flirtey project.

Through the collaboration with Dr. Amukele, Flirtey will conduct test flights at the invitation of disaster preparedness, organised by non-profit Field Innovation Team (FIT), as part of the Drones in Disaster ‘Do Tank.’ The event will enable experts from a variety of fields to come together and collaborate to develop solutions to humanitarian disaster scenarios.

The mission will demonstrate how drones can provide life-saving aid to victims of a disaster, such as a hurricane, flood or a system-wide electrical failure. At the event Flirtey will deliver medical samples between a medical relief camp on the coastline of New Jersey and a test facility on a vessel offshore.

The event is all about educating the private sector on humanitarian responses and aeronautical research into the integration of drones into the national airspace.

“This is an unprecedented opportunity to provide urgent aid and advanced diagnosis tools into a disaster zone with interoperability with key government relief assets,” said Flirtey cofounder, Tom Bass. “This event wouldn’t be possible without Mark and Kyle from Ryan Media Lab. Flirtey has been the beneficiary of their amazing ability to build coalitions here in Cape May, and also when we conducted the first FAA-approved drone delivery last year in Wise, Virginia.”

According to the United Nations, eight out of 10 of the largest cities in the world are coastal cities. In particularly Australia, which has seven costal capital cities, 85 percent of the population live within 50 kilometers of the ocean, making us susceptible to natural disasters.

“We recognise the opportunity for us to engage with drone developers and operators in ensuring the principled application of game-changing technologies in response to humanitarian crises around the world,” said UNOCHA humanitarian affairs officer, Andrew Billo. “Participating in this event supports the mission of the UN Office for the Coordination of Humanitarian Affairs (OCHA) to mobilise and coordinate effective humanitarian action with a broad range of partners.”

Since its conception in 2013, Flirtey has been rapidly developing and refining its technology and delivery services. Flirtey was the first company to conduct an FAA-approved delivery in the US and also the first to perform a fully autonomous drone delivery to a home in the US.

In March this year, Flirtey delivered a package containing bottled water, emergency food, and a first aid kit to a “residential setting” in the town of Hawthorne. Sweeny said that the delivery was a step forward to achieving the team’s goal of saving lives and changing lifestyles with its technology.

“Conducting the first drone delivery in an urban setting is a major achievement, taking us closer to the day that drones make regular deliveries to your front doorstep.”

More recently Flirtey has been recognised by the Smithsonian Institute for display at the its Air and Space Museum in the US. The startup’s six-rotor urban drone is now featured among some of aviation’s most notable artefacts, including the Space Shuttle Discovery and the Wright Flyer, the first successful heavier-than-air powered aircraft.

In continuing its mission to create the fastest, most efficient and customer-centric delivery service in the world, Flirtey is working with NASA, the University of Nevada, The New Jersey Test Site and Virginia Tech. Flirtey is well on its way to producing the leading technology and logistics systems for a mass-market drone delivery network.