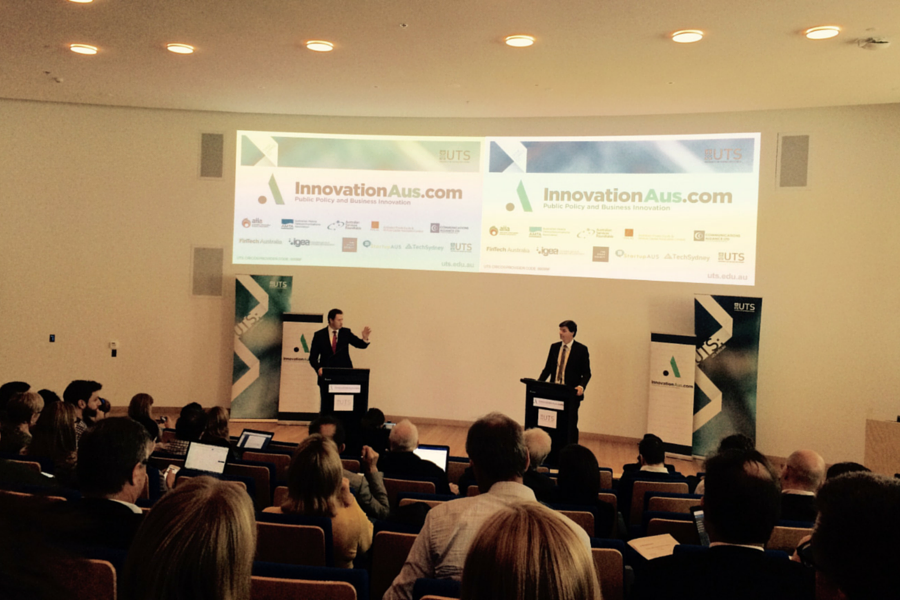 After half a year of talk about turning Australia into an agile, innovative nation and the delivery of a budget focused on promoting jobs and growth, tech and startups are far off the mainstream’s agenda two weeks out from the election.

Looking to bring attention back to the space yesterday were Angus Taylor, Assistant Minister for Cities and Digital Transformation, and Ed Husic, Labor’s digital innovation and startups spokesman, who took part in this election campaign’s first ministerial debate on innovation and digital transformation.

Held at the University of Technology Sydney Business School, the debate saw Husic and Taylor cover the NBN, the cutting of regulations and red tape to more easily allow startups to go about their work, innovation precincts, equity crowdfunding and tax concessions, and the issue of getting mainstream Australia to both understand and care about tech.

As is tradition with campaign debates, a sufficient amount of shade was thrown, with Husic telling the audience that Labor “love the Innovation Statement; the government took half of our ideas”.

Despite the amount of funding thrown at the space through the National Innovation and Science Agenda, Husic said the main problem is that the majority of Australians haven’t connected with the message of innovation and agility, saying that the average person is worried about other issues.

“This is about explaining to the broader community what is it we do when we champion innovation, what does it mean? We’re all excited about it, but people in the broader community aren’t; I represent an electorate 40km away from here, and if I went and had this debate in the Mt Druitt library, I don’t think many people would get what we’re talking about,” Husic explained.

Husic said there needs to be a focus on education and also upskilling Australians to make sure they’re prepared for these changes in the workforce, pointing to Labor’s National Digital Workforce strategy, which will look to help mature workers gain new skills and retrain.

Taylor agreed that there is a need to foster a greater culture of entrepreneurship and innovation, but said Australia is on the right track, pointing to startups like RedBubble going public on the ASX rather than listing in the US as a sign that the local ecosystem is headed in the right direction.

While the two politicians agreed on a number of points, the NBN was, to no one’s surprise, a bone of contention, with Husic bringing up Maitland startup StatsOne, which he said has the potential to become a global sportstech company but is hindered by poor internet speeds, as an example of the need for quality internet.

Taylor countered by pointing to his own experience as a founder and investor in a number of regional Australian companies, saying that “not once was the success or failure of those companies defined by whether we got enough money out of the government or whether we had enough broadband speed.”

He explained, “Make no mistake, I understand broadband speed matters, but it wasn’t the defining issue, the defining issue was the skillset in this country of venture capitalists, entrepreneurs, and that network which encourages and nurtures new businesses to get going and fire up.”

This led into a question about innovation precincts, with Taylor and Husic differing in their views here.

For Taylor, it’s all about location, with the development of city precincts key. The Coalition’s plans here are based on two linked policies: the first is the City Deal concept, which will see the three levels of government collaborate to redevelop an area, such as the White Bay precinct in Sydney, with this then leading into the creation of a financing unit to help fund the development of a precinct and its infrastructure.

Unsurprisingly, given the aforementioned distance of his electorate from Sydney’s CBD, Husic on the other hand said that innovation needs to spread beyond just the city centres and into outer urban and regional areas.