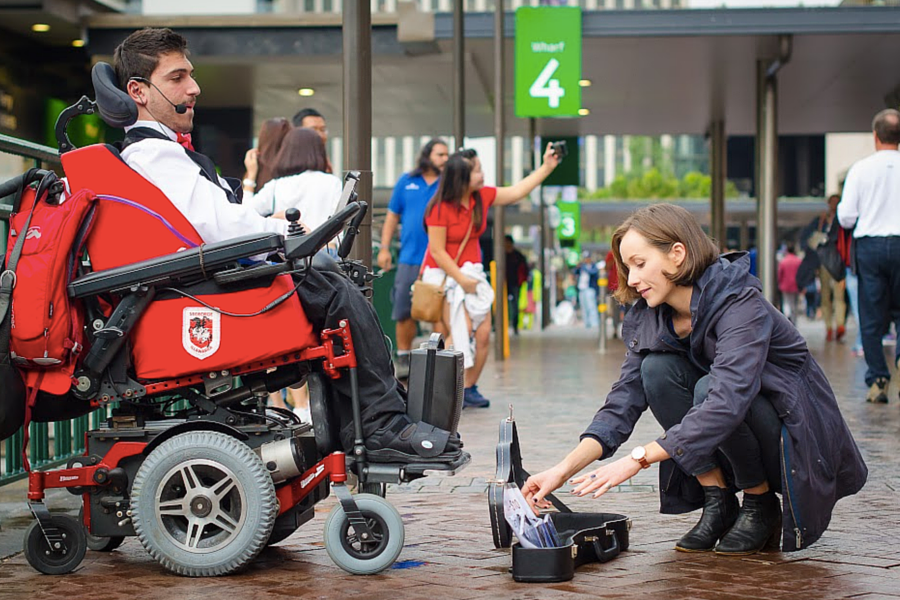 In 2012 it was estimated that 4.2 million Australians, or 18.5 percent of the population, were living with a disability, with 2.4 million of these people needing assistance with at least one broad area of activity. However, in some instances finding the right type of assistance for daily activities is a struggle.

It’s not just the struggle of finding a support worker, but rather the struggle of finding the right support worker, someone who offers more than just assistance. I’m not talking about the upcoming film Me Before You, where Game of Thrones star Daenerys falls in love with the man in a wheelchair that she has been hired to care for – that’s a bit dramatic and Hollywood; I’m talking about the real world where people have support workers that can spend nearly every waking second with them. Wouldn’t life be better if these people had common connection rather than just an employment one?

Cofounder of Hireup Jordan O’Reilly knows all too well the frustration of the traditional offline agency system. O’Reilly’s late brother needed round the clock support and this support was provided to the family from an attendant care service provider who were responsible for training and sending out workers.

“From a family perspective, I got to see how inefficient that system was, my family and my brother had no choice over the workers coming through our doors,” said O’Reilly.

O’Reilly also found that this system was very slow and often extremely expensive.

“The cost for support was often double what the support worker was getting paid, and it was incredibly disempowering,” he said.

At the same time O’Reilly also worked as a support worker and gained key insights into the industry. He found the same challenges lie on the other side, with support workers having no choice over who they worked with. It was at that point that he saw how these two experiences could be transformed with one platform that seeks to support both support workers and people with a disability.

Like O’Reilly’s brother there are many hundreds of thousands of people in Australia who rely on direct one-on-one attendant support and support daily. That’s a lot of people who rely on a support worker to access employment, education and community. The question Hireup sought to answer was what else can be done to make the industry more effective and efficient?

In the first half of 2015 O’Reilly worked on designing an MVP and building an online community of support workers. These support workers were given a platform to create an open profile so anyone looking for support from someone could read about their experiences and interests and choose them based on the potential of more personal relationships.

All workers who make a profile on Hireup must go through a verification process that any traditional agency would do to ensure all appropriate certificates and background checks, such as criminal record checks, CPR, Working with Children and First Aid, have been completed. This process typically takes one to two days and the platform will keep the certificates on site so support workers can easily find new jobs if they need to change who they are working with or locations.

Once a user’s profile has been verified, individuals can start searching for people based on location, interests, and support work that is either required or provided. The same goes for people with a disability, who can create a profile and then search, find and hire exactly who they want to support them.

When a booking has been made Hireup covers the shift with comprehensive insurance to manage all the complexities of administration from paying the worker through to providing superannuation, tax and wages. This makes Hireup not just an online connection for support workers and people with a disability but an online jobs platform that pays workers while still being affordable for people with a disability.

Hireup also prides itself on being flexible and providing casual and rewarding work, with workers on Hireup able to choose the hours and days they want to work.

With Hireup being one of the first employment-based models for support workers in Australia there is a great responsibility the platform has for people who use it and to also prove that peer-to-peer technology has more applications that for ridesharing.

“Really the challenge for us is to prove our model and keep growing it domestically by providing a great service to people with disabilities in Australia,” he says.

Since early 2015 Hireup has relaunched version two of its platform, which is now operating in NSW, ACT, Victoria, Queensland, Tasmania and South Australia. Since the new release Hireup has had over 1,800 support workers and people looking for support signing up and beginning to work together.

The challenge now for the platform is getting the word out that there are better alternatives for people living with a disability and there is more support for support workers. As part of a new expansion strategy, Hireup is opening up an office in Canberra and will then look at other major cities on the eastern seaboard.

“Over the next couple of months as the platform starts to grow organically into those cities we’ll be hoping to establish more of a presence there so we can be available for people who might like to find out more and get involved in the community,” explained O’Reilly.

As the National Disability Insurance Scheme (NDIS) rolls out in July people with a disability and their families will find more choice and control with their funding packages. This places Hireup in the best position with its user driven system to make the most of the NDIS and offer its service nationwide.

Currently Hireup  is looking at forming partnerships with other organisations in the sector in the next few months as NDIS rolls out.