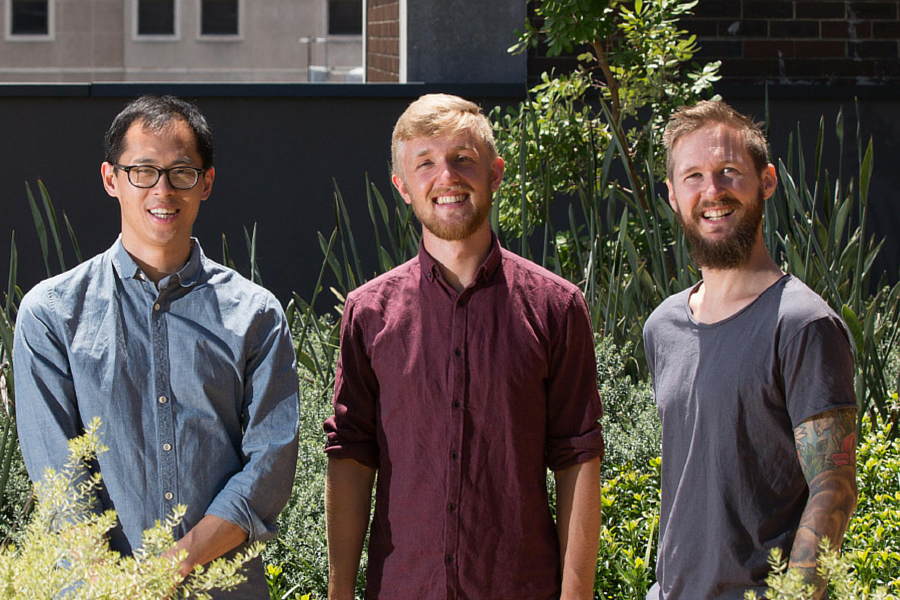 There are many ways to hit peak performance levels when exercising to get the most out of your workout. We run faster, climb higher and swim for longer when there are incentives, whether they be running from a mass murderer, climbing over a fence to escape prison or swimming away from a crocodile. That last one was an actual, real life idea conceived by a swimming coach in an attempt to get his kids to swim faster and may have worked until the authorities caught on.

Either way, these scenarios force an adrenalin rush where people achieve results that in normal circumstances would be near impossible. If you’re someone like me who dreads exercise than you’re a person who also needs these sorts of scenarios to run like the wind and swim like your life depends on it.

To gamify the daily exercise routine and add a little adventure into the weekly run is Sydney startup Dream Well. The company has created an interactive audio app called Fit For Battle that spices up your running experience by replacing the real life murderer with an audio version.

Fit For Battle has six interactive audio quests to choose from and places you as the main character and the hero of the story, where you need to run to escape from villains, dragons and goblins to survive and in turn maximise your running performance.

“We wanted to find something that could basically give someone a reward for exercise, because the payoff is usually in the future. If you’ve got a weight loss goal you’ll usually reach that goal months away, so this is something that’s really fun and gives you that instant gratification, and takes your mind off the exercise,” said Joel Turner, cofounder of Fit For Battle.

Stories revolve around interval training sessions and are based on different scenarios inspired by the fantasy genre. For example during your run Fit For Battle will prompt you to speed up or slow down depending on the audio game or based on your level of performance. The game might say ‘Look! There’s someone on the other end on the bridge and they’re cutting the rope, run to stop him before you fall into the chasm.’

In the real world you have to sprint and the game will know whether or not you reached your target and successfully stopped the villain from cutting the rope. If you fail and fall into the chasm then a different story arc is prompted, for instance you fall into a river and then continue the game from there. 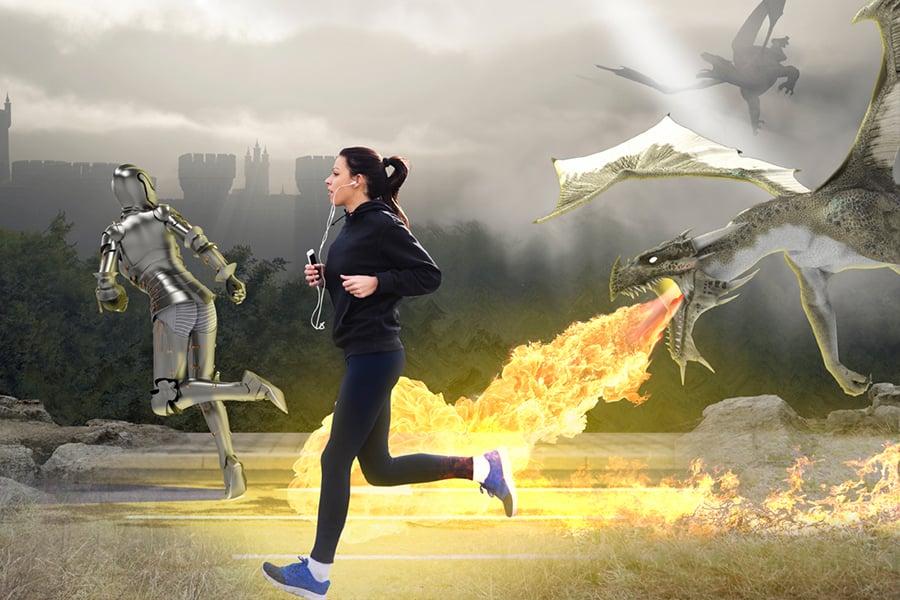 Fit For Battle works to reward the runner for exercising and celebrates each story milestone. The game also takes into consideration the runner’s performance in the real world and converts that performance into part of the story. At the end of the run the amount of calories that were burned convert into gold coins in the story, which can be used to buy clothes and magical items for the virtual character each user creates.

In each game there are various achievements and breakthroughs for personal best results to encourage the habit of running. To start any one of the six Fit For Battle quests the user selects the amount of time they wish to walk, jog or run for and can select the difficulty level they wish to start off at.

Upon pressing play the quest takes the user through a stretching session that initiates the first scenario of the game, which is a mission of discovery like finding a relic or a piece of treasure.  After a few minutes of warm up the quest moves on to more dramatic scenarios like running from monsters and dragons. The more a person runs the more drama there is.

The maximum run time of a story is an hour and once a quest is finished the user can move onto the next. The storylines, although different, follow on from each other to create an epic six story adventure. Each game play changes slightly, allowing the users to play multiple times where they find and experience new things. For example, a rare encounter with a leprechaun would prompt the user to chase after it and run fast to shake out all its coins. On first encounter the user might fail the challenge, however on the second game play they might win and unlock something else.

“There’s cool stuff like that rewards people who play it again and again. It’s like finding those secrets, those little Easter Eggs, they’re all in there and they don’t happen all the time,” explained Turner.

Fit For Battle acts as the ultimate distraction for runners who need or want something extra to push them harder or make them run faster. Running can be tedious and with Fit For Battle users end up running further and longer without even realising it.

Turner came up with the idea for Fit For Battle during a leisurely run. He first started running to take his mind off things but found that he hated the exercise. To take his mind off the run he listened to podcasts, music, and audio books. One day he was listening to an audiobook and the way the narrator described the scenario felt to Turner as if he was in the story. This sparked an idea to create an audiobook that would tell an immersive story and interact with the user as their run changed.

Turner has a background in illustration and graphic art and drew the initial storyline himself. From there he brought on a team that could turn the illustration into an audio narration. At first Dream Well conceived its audience to be gamers, males and garage dwelling Xbox and PlayStation players, however the team found that true gamers are reluctant to leave their couch so they started targeting the app towards people who already run.

Running has many benefits and can lead to improved brain performance, elevated mood levels and even better sleep patterns. To incentivise the non-runners and track existing runners performance are trendy wearables like Fit Bit and other point-based running apps like Running Heroes.

The French-based app works off an activity points system and takes into consideration things like pace, time, distance and elevation. Each minute of running earns the user one activity point that can be redeemed from brands the startup has partnered with like Shopwings, HelloFresh, Anytime Fitness and Uber to name just a few.

Last year Running Heroes launched in Australia to target an estimated five million runners and penetrate 81 percent of the smartphone market. 60 percent of runners are said to use their smartphone as a tracking device, making running apps an easy target to people who have already hit the ground running (pun intended).

The Fit For Battle app is soon to launch in early June and will be free for users to download, compatible for all smartphone devices. Each story chapter in Fit For Battle is like a chapter in a book, so users don’t have to pay to finish the game, but Fit For Battle will charge the user $2 to $3 to unlock extra features and quests.

Dream Well this year took part in Slingshot’s HCF Catalyst healthtech accelerator program, pitching Fit for Battle to a room of investors and industry folk at the accelerator’s demo night a few weeks ago.

Currently Fit For Battle is seeking its first round of investment and are in talks with a few unnamed investors. For its first funding round the startup aims to raise $500,000 to go towards the studio and production side of development.

As the app is heavily audio based the sound quality needs to be A grade, so a lot of time needs to be put into sound design and production. The funding will also help the team explore more games, generate better storytelling and expand into other genres.

Turner said, “Our plan is to have a whole suite of books that people can run with, that suit a whole variety of tastes. Fit For Battle’s just the first entry point for us. That funding is going to represent us exploring more games and create better storytelling.”