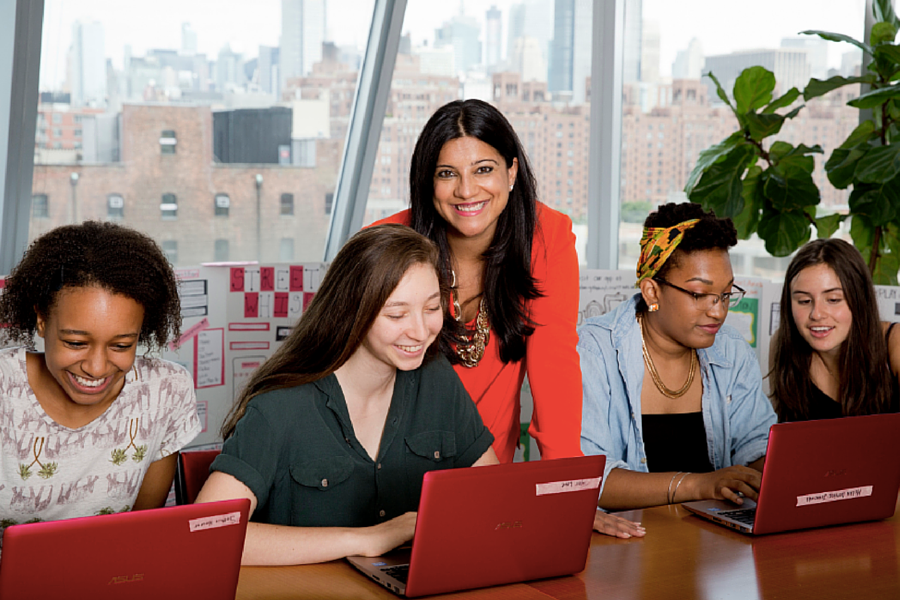 Girls have it pretty rough, from coders to journalists we all feel the same pain of having boobs, a vagina and a brain and coordinating all three to work at the same time.

While these ‘issues’ have affected literally no girl in the world as they go about their work, females are still often excluded when it comes to studying and working in tech-based fields.

Though these statistics have been a hot topic of discussion in the tech space as of late as companies discuss how they can implement diversity programs to address the gender imbalance in their workforce, the stereotypes persist, particularly for teenage girls learning about and starting to get into the field.

Bringing this fact to light for the world again is Girls Who Code, an American non-profit working to close the gender gap in the technology and engineering sector through programs that look to educate, inspire, and equip high school girls with the skills and resources to pursue opportunities in computing fields.

Their recent video is a parody and a moronic satire of factors affecting women coders. These factors include women having boobs that are too distracting to even attempt to code.

“I don’t even have boobs yet and they still get in the way,” says one prepubescent girl who could have been coder if only she weren’t female.

Women also menstruate, you know that thing we do once a month that threatens to cause an emotional overload, turning the office into a bloody panic of tears and hormones. Yeah, that thing. Well apparently it also stops girls from coding.

“It’s hard to code when you can’t stop crying,” says one wannabe-coder who can’t overcome the emotions of being female. I can sympathise, I face the same problem every day when I try to write.

“Coding is too rational when I am this emotional,” says another would-be coder suffering from PMS.

The video may be satirical, playing on stereotypes, but the thing about stereotypes is that they stem from real beliefs some people may hold – and they can have a real impact.

But it wasn’t always this way; in fact, women were among the very first programmers, assembling and programming the first electronic computers during World War II, while it was Margaret Hamilton who wrote the code that sent Apollo 11 to the moon.

Thirty-seven percent of computer science graduates in 1984 were in fact women but, with as the stereotype of the young, white male ‘hacker’ emerged, that figure is now down to just 18 percent.

So how can we encourage more women to studying STEM at school and filter that learning into jobs after university? As initiatives such as Girls Who Code show, the choice needs to be encouraged from a young age and tech skills need to be taught without gendered stereotypes and the notion that women prefer arts over science subjects.

Immediate past president of the Australian Computer Society Brenda Aynsley has said Australia has a “chronic shortage” of women graduating with computer science or coding skills, and that it is critical for the sector to capture the interest of girls as early as possible by teaching them coding and computational thinking in every school.

“All the research suggests that by the time girls reach 15 many of them have either dismissed or not even considered the option of a career in ICT. One of the key reasons is the lack of opportunity to engage in computing science, either through the curriculum or through extra-curricular activities. Feedback from groups such as Code Club and others suggests that once girls are given the opportunity to do coding they generally have a strong aptitude for it and excel,” Aynsley said.

These issues are currently being addressed in Australia by a number of community-driven initiatives, such as Code Like A Girl Australia, Code Club Australia and Melbourne startup Code the Future, which launched a plan in January to get 10,000 Australian school students coding by the end of the year. This plan also coincided with an endorsement of the new Digital Technologies subject that is to be introduced into the Australian Curriculum this year.

To formally address the lack of girls coding in schools, Opposition Leader Bill Shorten last year announced a $4.5 million funding program to help get girls coding in schools. Shorten announced that, if Labor is elected at the upcoming federal election, grants of up to $150,000 will be available to organisations such as Code Club Australia, Code Like A Girl and Tech Girls Movement to help them scale their activities and reach more young girls.

So to all the girls and women out there who thought their boobs were too big, small or just prevent them from coding from simply being there, check out Girls Who Code and the initiatives linked above and find out how you can get involved.

Disclaimer: This article was co-written by Liz Leigh and Gina Baldassarre, because they were both too hormonal to do it alone.

Previous article Sydney startup Nabable lets users buy and sell pre-loved furniture without the hassle of organising pickup and delivery
Next article Is your startup taking advantage of the $20,000 tax break?
Via Opinion
Tags codingfeminismGirlsGirls Who CodeinnovationSTEMstudentsStudytechnologywomen