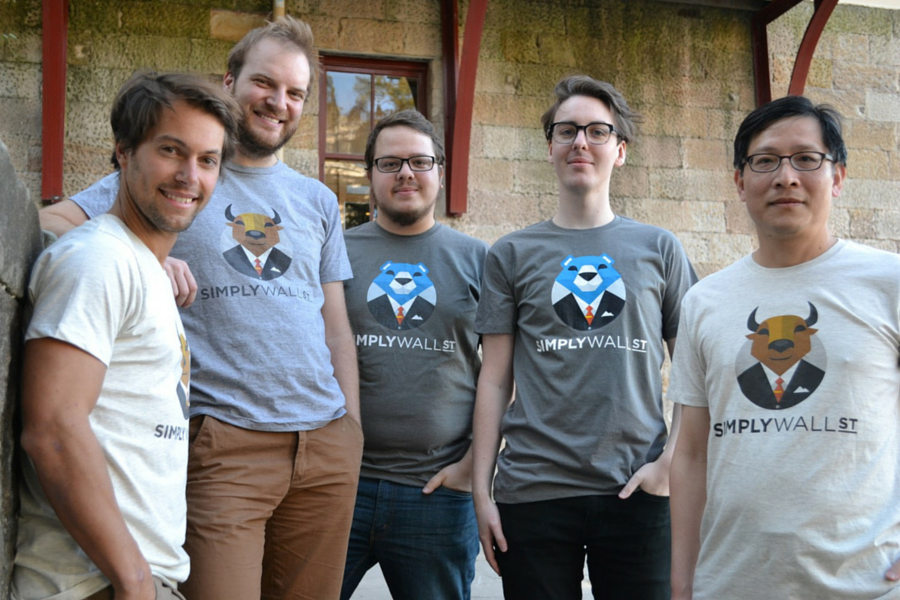 Sydney fintech startup Simply Wall St has announced its first acquisition, picking up Atlanta, Georgia startup Capp.io. The acquisition, made for an undisclosed fee, was funded in part by the startup’s $600,000 seed round last August.

Like its Australian counterpart, Capp.io looks to make research around investment easy for the self-directed retail investor. Founded by university students Jay Deuskar, William King, Adam Lieberman and Chintan Parikh in 2014, the startup had not raised any funding.

Al Bentley, cofounder of Simply Wall St, said he has been watching the Capp.io team for some time now, making the decision to acquire as he saw the Capp.io team shared the same mission and values.

“We always knew about [Capp.io]. They were always on our competitors’ list, because while they’re not doing exactly what we’re doing, they’re playing around in the same space as a tool for self-directed investors,” he said.

“Last year my cofounder [Nick van den Berg] and I went on an investment mission to the UK and we thought we mights as well go to the US. While we were there we reached out to [Cappo.io] as they were in New York at the time, and so we went for beers. It was crazy because they are group of people we’d never met before and we had so much to talk about and had gone through the same trials and errors.”

Bentley said one of the most exciting aspects of the acquisition is not the 5,000 users it brings to the table, but the channels through which they were brought on.

“[Capp.io] have very different channels than the ones we’ve been using to acquire users in the US. Because they were at uni, a lot of people coming on were MBA, finance, and business students. Not only can we use their existing base but we can start leveraging those channels as well,” Bentley said.

“Frankly, I don’t know how Nick and I would have been able to leverage those channels in the first place; it’s the kind of thing where you really have to be on the ground there.”

Half of the Australian startup’s customers are based in the US, with a quarter in the UK. This highlights significant growth for Simply Wall St since closing its funding round and launching out of beta last August, with its number of users at the time 11,000.

As well as seeing its tools tested by NAB through the bank’s online trading arm nabtrade, the startup has launched an affiliate scheme for finance content writers, allowing them to incorporate the startup’s infographics into articles and track and earn off conversions.

The startup also launched its freemium model last month. Priced at $179 per year, the plan gives subscribers unlimited usage, while the free or ‘learner’ plan limits users to watching 10 companies a month.

As Simply Wall St looks to prove its business model, Deuskar and his Capp.io cofounders will not be joining Simply Wall St, instead deciding to pursue other opportunities.

He said, “Founding and growing Capp.io has been an amazing experience. However, we’ve decided to focus on similar opportunities in a different space and I don’t think it’s fair to our users to leave them with an unfinished product. I think Simply Wall St has a very similar vision to Capp.io and is doing a great job at simplifying long term investing.”