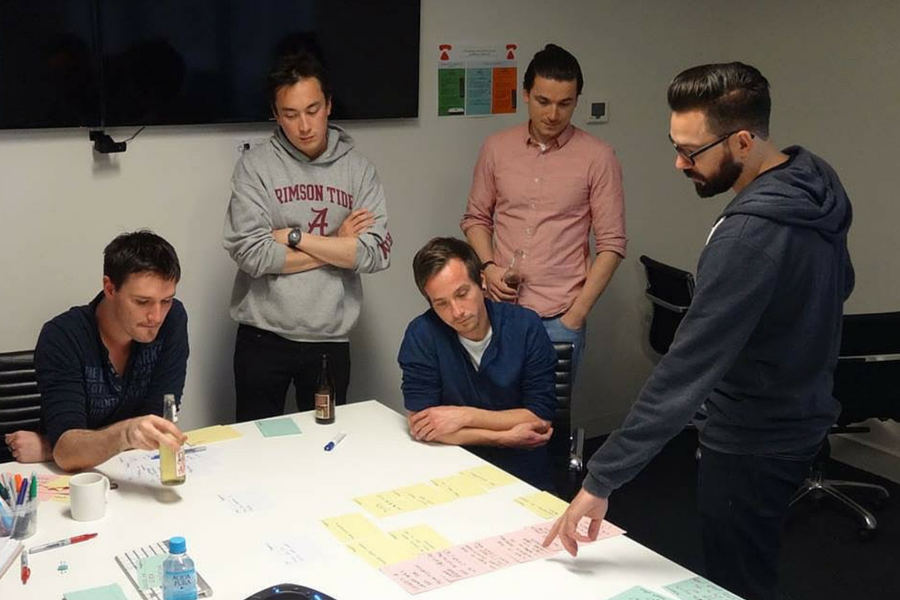 It’s obvious that Melbourne paves the way for music venues, pubs, and gigs, being that it is one of the biggest live music cities in the world. It’s a city where live music promotes local talent every night of the week and with no vibe-killing lockout laws, it’s the place of choice for any Australian muso.

When choosing a live concert, band, or venue, there are numerous gig guides and blogs that offer information on what’s hot. From What’s On to Only Melbourne and Beat Magazine, music and artists have a chance to tap into large audiences. However, music enthusiasts like Jef van Acoleyen believe there is a better way to connect audiences with live music than the age old print magazine and online reviewers.

“To an extent, there are print businesses that try to bring some of the content online but they haven’t really given a better user experience to what we think it should be, namely just really intuitive and very easy,” said van Acoleyen.

To push gig guides into interactive and music focused mobile applications, van Acoleyen cofounded a new gig guide for Melbourne called GoHear. The startup offers a weekly gig guide that not only acts as a review but doubles as a playlist. Users can sample the artist’s music and search for the music and venues they like, basing their choices on location, genre, and price.

“What’s more is that, by providing a mobile guide that seamlessly incorporates the artist’s music, we are creating a level playing field for established and new artists alike, giving upcoming artists a platform to be discovered and driving more people towards the live music scene in general,” explained van Acoleyen.

GoHear aims to get more people interested in going to gigs and wants to help the live music scene to amplify its audience. The app targets people with a lack of knowledge of live music by providing them with instant access to what’s on and what the music sounds like, through instant connection to the artist’s music.

Instead of having to jump between gig guides, Youtube, or Soundcloud, users can search and hear music all in the one app, making it faster and easier to find new and known artists. 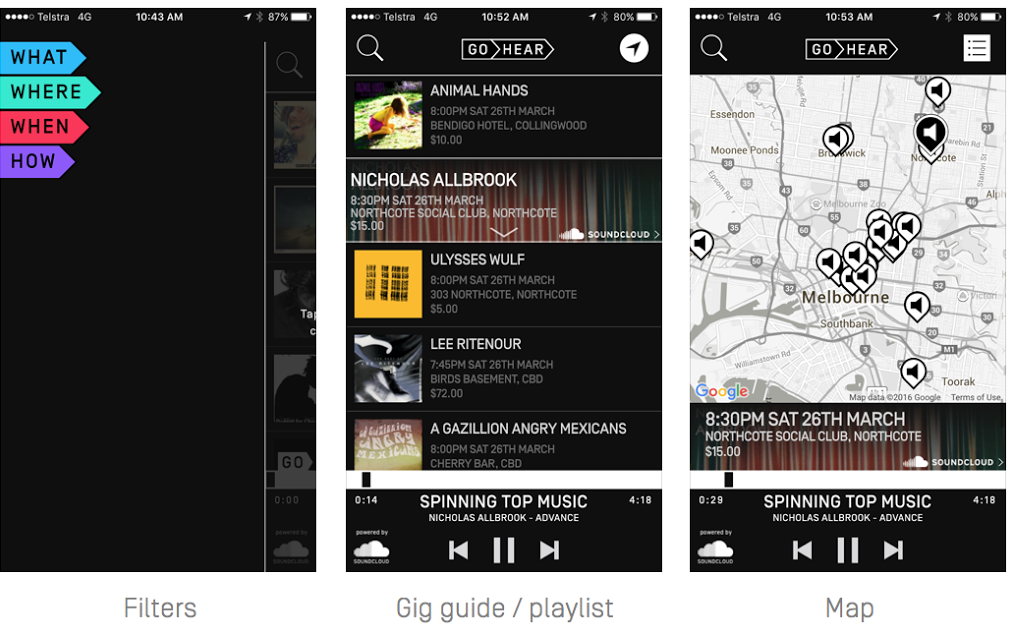 van Acoleyen calls GoHear the Urbanspoon of live music, by providing users with samples of potential interests. “The app provides an easy way to find gigs for users and an equal opportunity for artists to get their music heard,” he said.

Earlier this year Perth startup Gigger, a platform that describes itself as the Airbnb for venues, launched to connect the right venues with local bands. The platform was spurred by cofounder Anthony Manning-Franklin’s first hand experience of processing and promoting gigs.

Both Gigger and GoHear look to fill in the promotional gaps for local artists by providing them with alternative platforms to find and connect with like-minded musos.

With GoHear there is no requirement for artists to upload their gigs, given that their latest live music concerts have already been promoted on other sites. The app searches for live music and updates that data for each upcoming week, giving users an instant experience of what’s on. GoHear acts as a free marketing channel for artists and a free gig guide for musos.

For users music selections are made easy with a range of filters that match criteria and offer music tailor suited to taste, dates, and location. The live music that fits the user’s criteria is displayed in a playlist with the option to read more information on the event or listen to a sample of the artist’s music.

Initially GoHear will be limited to including artists whose music is available on Soundcloud, however van Acoleyen explained that this is something the team will be expanding on in the future.

In April this year GoHear decided to launch its MVP to gain some much-needed market and user feedback. The choice to launch so early after only a year of development shows the team’s commitment to the lean startup methodology, and heading into the market will allow them to test what features users like and what they want more of.

The app is free for users and is currently very much grassroots focused, looking at the small-time local artist and bands that want to make a name for themselves.

“Our app is about discovering the 99 percent of gigs, if you will, that are not the Radioheads or Coldplays that are coming through our city right now, but actually the bulk of gigs that are on in Melbourne that people have a harder time finding out about,” said van Acoleyen.

Currently GoHear is working towards proving the viability of the app and building up their user base. With these types of platforms monetisation is dependant on the market’s interest and the popularity of the app.

“We’re not looking at monetising through traditional advertising so nothing like pop ups or display advertising or free roles or anything like that, we’re looking at more types of monetisation that actually don’t interrupt the user experience,” explained van Acoleyen.

These alternative monetisation roles have been identified by the GoHear team, however they said it’s too soon to reveal what those advertising focuses are. So for now the app will remain free to both users and artists with the promise that the use of any advertising models will not affect the user experience.

For the next 12 months, while thinking about marketing and monetising GoHear will also be very much focused on its growth in Melbourne. van Acoleyen has said the app will be introducing some new features like ticketing links to give users a full experience from music discovery to live music experience. With the integration of ticketing links, GoHear will also be looking at integrating social media so users can share the gigs they are interested in with their friends.

He said, “That would hopefully make it more of a social event you can have with your friends, but also obviously more of an inherent or built in growth potential from that point of view. We are very much looking at expansion beyond Melbourne if we manage to prove the model.”