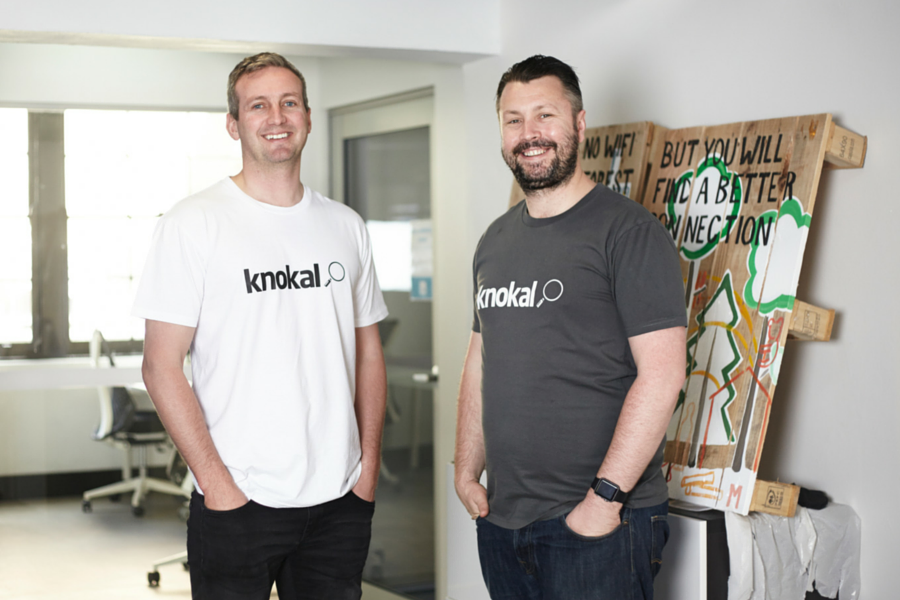 Even the least tech-savvy of small businesses have mostly figured out to reach and market to their consumers. For those looking to reach other businesses, however, it can be a little harder, with most businesses focusing on either proximity or price rather than how suited the other business is to work with them.

Through Knokal, cofounders David Smith and Nathan Knox are looking to recreate, in a sense, the concept of a dating platform in order to help well-suited businesses find each other. While most internet searches for business partners, suppliers, or contractors tend to focus on price, Knokal is focusing on compatibility, with Smith explaining that the idea came from watching his sister struggle to set up her online fashion business.

“She had experience in the buying side and a bit of experience in the design side, but she went through a trials getting the right lawyer, web designer, marketing people, and PR. I used to watch the people she spoke to and I remember thinking, I don’t think that’s quite the right person for her,” he said.

“Should she be talking to one of Sydney’s biggest firms when she’s still running your business out of a spare bedroom? That’s where it came from; I wanted it to be ok for a small business to be small, and find people who are going to appreciate their business more.”

The platform has users answer a few basic questions when they first sign up. They are then taken through to a dashboard, where the system’s algorithm shows them the different businesses that could be customers or service providers. This algorithm takes into account factors such as locality, a user’s own company size and the company size that each user prefers to deal with, and specialisation.

Members can later edit their profiles, providing further details about themselves and their business to help refine the businesses presented to them. The goal, said Smith, is to match members with others that they wouldn’t have thought of before.

“You can go onto something like Match.com and you can get really granular about what you want; you want a brunette between the ages of 30-40, non smoker, and a certain attitude. There are so many factors that go into it, but when you go onto a directory you just get to click keyword and location. We wanted to bridge that gap and give people a chance to get as much information as possible,” Smith said.

Smith and Knox have largely self funded the development of the platform thus far, with Smith working on the platform full time and Knox juggling Knokal and a full time job. They recently made their first hire, while Smith has also brought on his father as a board member, who invested a small amount to get development going.

“He is a small business owner with more than 40 years of experience. It’s very interesting having somebody of another generation giving their two cents about technology, that’s been helpful,” Smith said.

Launched officially in February, the startup had been operating in beta for several months, bringing on around 60 users. The main feedback the team received, Smith said, revolved around the lack of a community feel on the platform. In response Knokal built a system called ‘Boost Points’, which incentivises users to interact with one another and write blogs about their business and work. These points also give users more power with the matching algorithm.

The platform is currently free but a premium membership option will soon be introduced. For around $30 per month, the premium model will allow users to add things like videos, reviews, and testimonials to their profiles.

The startup is focusing heavily on the small business market, looking Australia-wide from the get go. Smith admitted that whether you look at Knokal as a marketing tool or as a directory, it has competitors in both camps, from TrueLocal and the Yellow Pages to Facebook. However, he said, Knokal is about providing value past what these other platforms are offering. It gives users the opportunity to interact and create more of a personalised profile than they are able to through the Yellow Pages, for example, but doesn’t require them to be social media whizzes like Facebook does, and lets them market directly to potential customers.

“The pitch at the moment is that we help them grow their communities and their business, and that we can find them customers that they would find in any other way,” Smith said.

The Knokal team will be looking to exhibit at a range of conferences and events over the next few months to onboard users, particularly in regional centres.

Smith said, “There are just as many customers in Wetherill Park and the Sutherland Shire and regional NSW or regional Victoria that are looking for a service like this as opposed to finding just the people in their local suburb.”