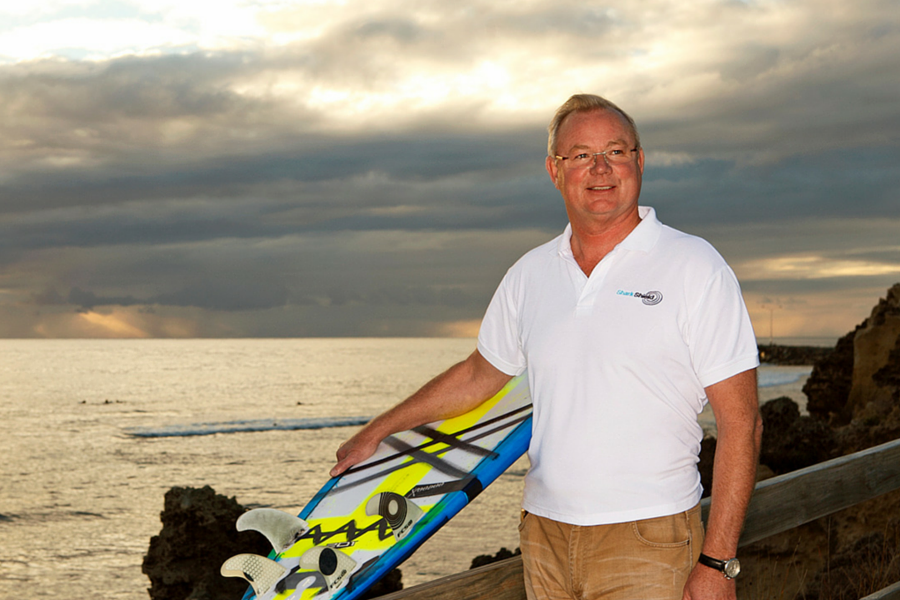 A number of products proclaiming to deter sharks have been on the market for years, with little research proving them to actually work. No one wants to jump into shark-infested waters and test these products out, so it can hard to gauge their impact and effectiveness. These products range from patterned wetsuits and surfboards to wearables such as arm bands, floating electric field devices, and most recently, electronic stickers for surfboards.

These devices and designs are all about making the surfing community safer, and it isn’t hard to see why people are keen to buy in: last year saw a record number of shark attacks, with 98 global unprovoked attacks on swimmers recorded, according to the International Shark Attack File. This statistic shows that the risk of shark-human interactions is on the up, most likely due to the growing amount of surfers and swimmers invading the sharks’ territory.

A new form of technology was recently trialled off Bondi Beach, the NoShark surfboard design by local startup Disrupt Surfing. The online platform allows customers to upload their own images or designs or choose between a variety of local artists to design special patterns, which are then custom fitted onto a selected surfboard that is shaped in one of five studios around Australia. Now, Disrupt is giving away free specially-designed ‘shark deterrent’ patterns for surfers when they purchase a board from the startup’s online store.

Gary Elphick, founder of Disrupt Surfing, used to work as a surf instructor and believes that surfers should do everything they can to deter a shark from attacking, and this means not playing the victim.

“It’s about peace of mind and helping people feel safer when they’re doing a sport. There’s a lot of talk about culling sharks at the moment and that’s not the right thing to do,” he said.

Customers can get a blank board for $595 or $749 fully designed, with free delivery in Australia.

The science behind the idea of patterned boards comes from studies conducted in Australia and the US. The main theory of why sharks attack humans is not, contrary to popular belief, because they want to eat us, but mainly because they are inquisitive creatures and think we’re prey – most likely a seal. The size of a surfboard, paired with arms and legs, looks remarkably like a seal. Elphick believes that the one colour of the bottom half of the surfboard can be quite confusing for sharks.

“It’s quite simple, it’s about breaking up the consistent colour that they see and telling the shark ‘hey I’m not a seal, don’t eat me,” explained Elphick. “Sharks aren’t completely impaired to seeing colour and will see shades rather than colour. So if it’s all white, then that’s just as much as being all black to them.”

However Lindsay Lyon, CEO of Shark Shield, believes that patterns and colours are ineffective when it comes to deterring sharks.

“Given that sharks feel vibration in the water and electrical impulse, the visual stuff is slightly negligible,” he said.

Lyon has been part of the development of Shark Shield in Australia, a company with the only products on market that are scientifically proven to deter sharks from attacking.

These products have been out on the market for nearly 20 years and were originally developed in South Africa. Lyons explained that sharks have an additional sense to finding food that most animals don’t have. They use smell, sight, and touch at close range, but at long distance sharks rely on vibrations that they can pick up thousands of meters away.

“They have an electrical sensing ability; they have these little gel-filled sacks in their snout and they use it the same way you and I use touch at a very close range. At about 50 centimetres they can sense the electrical pulse of a living animal,” explained Lyon.

Shark Shield works by creating a large and powerful electric field that turns a shark away when they come within range. The electric field causes the gel-filled sacks in the shark’s snout to spasm uncontrollably, forcing them to turn away.

The latest product from Shark Shield is the Freedom Plus Surf, a decal sticker that is placed on the bottom of the board with electronics clipping in and out of the gripping pad, allowing surfers to use it between any surfboard. Lyons says it has no impact on a surfer’s ability and doesn’t affect the aerodynamics of the board of the performance. The product costs $599 and will be shipped out to customers from July this year.

Research into Shark Shield products is being conducted at the University of Western Australia, which will be peer reviewed and published in the International Science Journal in the coming months. $680,000 was spent on government funded research and the only deterrent that tested effective was Shark Shield, showing that on 99 percent of occasions it turned the shark away – these sharks were the giant great whites off the coast of South Africa.

Another shark deterrent product on the market is SharkBanz, a magnetic band that goes on a swimmer’s wrist or ankle. However, the effectiveness of the technology is questionable. Marine biologist Dr. Patrick Rice, founder of Shark Defence, has said that the effect of Sharkbanz is amplified if many people in a group of swimmers or surfers are wearing them. As more people choose to wear Sharkbanz, the more everyone’s risk is reduced, which raises the question of how useful the product is to a single swimmer.

According to Lyon, the technology used in the Sharkbanz is substantially inferior to Shark Shield.

“You will not find a scientist anywhere that would tell you that would work. You would be better off taking your iPhone with you because it would put out a bigger electrical field and if you get attacked you can call 000. So put your iPhone in a plastic waterproof case and take that,” he said.

“[Sharkbanz is] a small ankle device and because it’s so small and the powers so small, the electrical field is about the size of a baseball. The electrical field on a Shark Shield is about the size of a Football, it’s six metres high and four metres wide. The reason it has to be so big is, if you think about a shark attacking, when it’s coming in at one metre a second it’s got to hit a pretty big field to give it time to stop, divert, and turn away.”

Shark Shield products are currently available online and in Australian dive stores. The company has also expanded into the US with offices in Florida, and also distributes to California. Shark Shield has a strategic partnership with Oceana and Earth and is co-branding a new surfboard product, leveraging its credibility into the surf industry.

With the further development of wearable tech we will likely see more shark deterrents pop up on the market. Given having the right product could mean the difference between life and death, consumers would do well to research their options carefully.