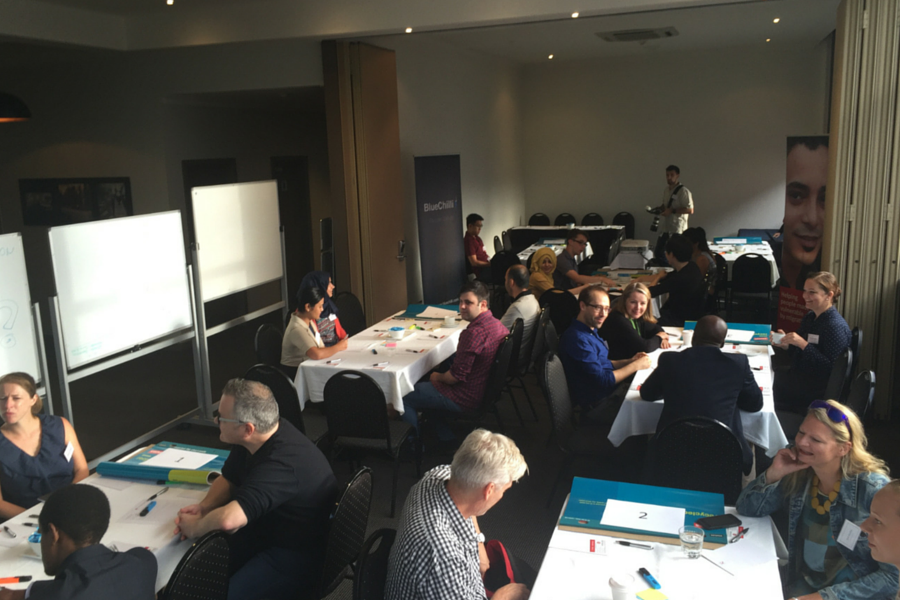 BlueChilli this week joined forces with the Australian Red Cross to hold a Refugees and Recent Migrants ideas hackathon, looking to gain perspective on and build upon cultural cohesion in these Australian communities.

The ideas hackathon sought to break down the question of what can be done to progress social cohesion as a nation, with a focus on the interactions between culture, language, and religion as they relate to social cohesion in modern Australia. The intersection between various communities in Australia such as those of recent migrants and refugees provides unique opportunities to innovate and adapt.

The Red Cross Australia called on professionals from the creative and tech community and local councils around Victoria to apply their skills to create innovative solutions and better outcomes for local recent migrant and refugee communities, who are in need of improved social cohesion.

The event took place in Carlton, Victoria over two days, where teams were formed in a mixed representation of people working across all at the Red Cross, clients they serve, refugee Australians, and people from the startup ecosystem.

“We had people from the general startup community, social enterprise community, web developers and coders and creative and marketing professionals all mingling in with the existing Red Cross practitioners,” said Ren Butler, market manager at BlueChilli.

“We made sure that each group had one existing client of the Red Cross Recent Migrants division; it was super important in the way we facilitated to place a heavy emphasis on real, lived experiences.”

The purpose of the event was for professionals and community members to spend time in small teams to come up with ideas that are open source, using cheap tools to build minimum viable products. The lean startup methodology and the hackathon enabled people to work on new solutions that don’t involve technology or involve minimal bits of technology, explained BlueChilli’s Alan Jones.

“Because of their funding sources and their constraints, [refugees] don’t have access to a lot of the latest technology. Technology is a small part of the puzzle,” Jones said.

The core idea of the event was to look at ways to improve communication, collaboration and use community members to assist.

“Hackathon methodology pulls people from all walks of life out of the organisation, and when you put them into multidisciplinary teams, you see that people who have never worked together before have really very little in common and so giving them a very strict time box puts aside organisational and bureaucratic ways of doing things,” Jones said.

10 areas of focus were drawn up for teams to choose to work on. These focus areas included employment, digital life, sports and recreation, business and entrepreneurship ,and social interaction.

There was a theme of micro connections, with people wanting to build upon existing help, but it was ultimately about making that initial contact and the initial ask for, or offer of, help and diminishing the fear of rejection refugees and recent migrants face through the use of technology. Jones said it was important that over both days people from different communities made connections and focused on individuals who had lived experiences.

Some of the ideas developed by the focus groups at the event include:

Schools Connect: a portal for families to share Q&A as their students start and progress through their schooling

Lift Our Game: a program that uses the power of sport to create confidence and social cohesion between new arrivals to Australia and the established community

Pen Pals: a digital matching service that connects recent arrivals with members of the established community, then facilitates long-form letter writing between them to share stories and foster cohesion

In My Backyard: a communication portal for everything from job hunting to legal questions to personal network building

Group 2: a Quora meets Tinder platform that lets recent arrivals ask specific questions to an individual. The person asked can choose to answer it or pass it along to the next person who is better suited to respond

The participants will now work and follow up with the Red Cross and BlueChilli towards the creation and validation of their ideas.

The event follows last year’s Techfugees Hackathon, held at Liverpool Library through sponsorship from Settlement Services International (SSI), a not-for-profit working with refugees and asylum seekers around NSW. Like BlueChilli’s event, Techfugees had refugees work side by side with the techies in order to help them gain the perspective necessary in order to create real solutions. The sponsorship from SSI was facilitated to ensure that the ideas developed at the event would live on beyond the hackathon weekend, with the winning team receiving funding and support from the organisation.

Similarly, Jones highlighted the Red Cross’ eagerness to partner with BlueChilli for the ideas hackathon.

Jones said, “We made great progress, and the interesting thing about the hackathon was that this is the first time the Red Cross is doing some service design using the hackathon methodology. It was an interesting experiment for them.”