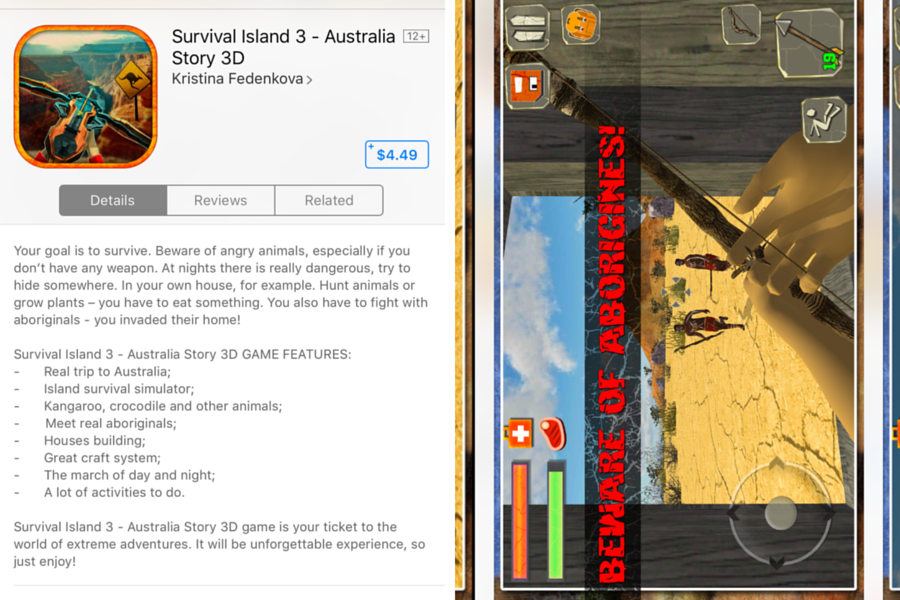 A common lament from mobile developers is that getting an app onto the App Store can be a real piece of work thanks to Apple’s stringent criteria. Apple’s guidelines state that the company will “reject Apps for any content or behaviour that we believe is over the line. What line, you ask? Well, as a Supreme Court Justice once said, ‘I’ll know it when I see it’. And we think that you will also know it when you cross it.”

A game warning players to “beware of Aborigines” and allowing players to attack them, however, didn’t seem to cross this line. As well as a game screenshot showing the aforementioned warning, the information for Survival Island 3 – Australia Story 3D, which had been live on the App Store for a month and on the Google Play store since last week, explained,

“Your goal is to survive. Beware of angry animals, especially if you don’t have any weapon. At nights there is really dangerous, try to hide somewhere. In your own house, for example. Hunt animals or grow plants – you have to eat something. You also have to fight with aboriginals – you invaded their home!”

The game made the headlines on the weekend after it came to the attention of New Matilda and a petition to take it down from the different app stores was launched.

The petition, which garnered almost 85,000 signatures in two days, made the argument that the game “further perpetuates the denial of Indigenous Australians humanity. It associates us with flora and fauna of the Australian landscape.

“By shooting ‘dangerous Aboriginals’, this app makes us inhuman, it re-enforces racial violence, lack of punishment for white people taking black lives, it makes fun and sport of massacres and Frontier violence. This App is another colonialist frontier and continues to exploit the deaths of many Aboriginal people without regard to the trauma that it instigates.”

“The profiting of historical genocide and introducing these genocides as entertainment completely disregards the continual suffering of our people.”

Some in the gaming community, however, have hit out at the media’s interpretation of the game, saying that it is no different from, say, Grand Theft Auto allowing players to kill cops, and that the game’s foreign developers were not aware of the context surrounding the place and history of Indigenous Australians.

Billy D of OneAngryGamer said that the game does not, as various outlets have reported, “require” players to bludgeon anyone to death; rather, he said the Indigenous Australians in the game are standard non-player characters and can be either friendly or hostile depending on the player’s actions. While game play footage from one YouTuber featured an Indigenous Australian being killed, videos uploaded by others focus on the player getting through the game alone.

New Matilda also published a defence of the game, saying that role player games can be used to teach players problem solving skills and help them become more empathetic. However, writer Tom Burns admits that Survival Island does a poor job of this.

In any case, the whole idea of the game is, at the very least, culturally insensitive to the extreme; playing out a colonialist fantasy like this in 2016 is weird. And sure, you can kill cops in GTA, but the police aren’t a minority group that have been discriminated against and marginalised in a myriad of ways for centuries. I’m no Supreme Court judge, but this game crossed way over the line.