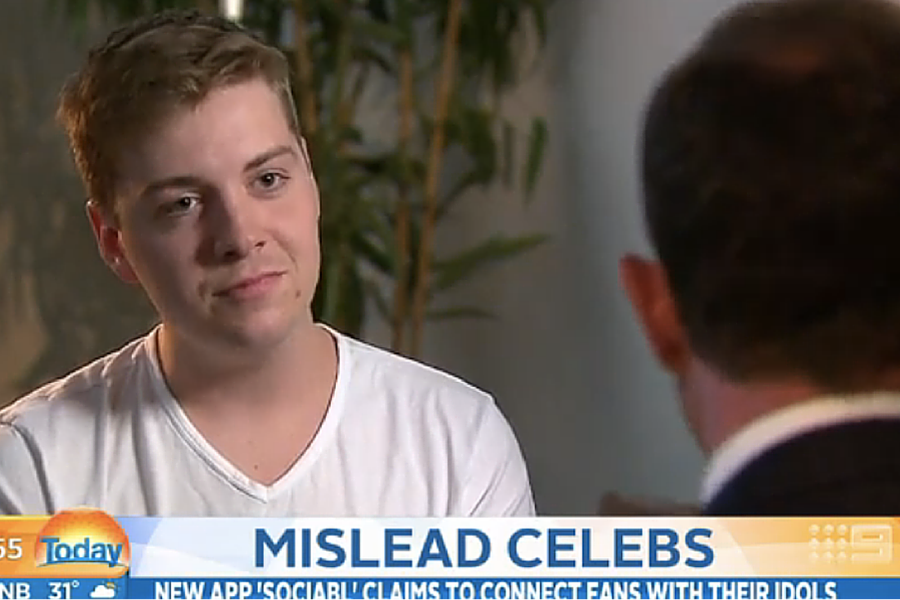 Ever wanted to have a one-on-one chat with Jennifer Lawrence to find out a hidden talent that she hasn’t already told Ellen or Graham Norton? Ever wanted to pitch your business idea to Richard Branson? Well, now you can, but like everything in life it doesn’t come free – in fact, you might need to save every paycheck for this one.

Adelaide startup Sociabl is an app that allows anyone around the world to connect with the biggest celebrities. It allows fans to have an intimate, one-on-one video call with their chosen celebrity and raise money for the celebrity’s charity of choice in the process.

“The customer makes a purchase, the celebrity calls them up and the charity gets to spend some cash,” says Sociabl cofounder Brandon Reynolds.

Three years ago Brandon Reynolds and Jarrad Hrotek conceived the idea for a platform where fans can interact with celebrities on a more personal level. They believe the Sociabl app provides an experience beyond what exists, giving die hard fans the ability to chat with their idols from the comfort of their own home.

But the app is not just about finding out the juicy goss of celebrities – Reynolds and his team point out that their main focus is on charities in the hope of encouraging fans to cough up significant amounts of cash. Calls last a minimum of two minutes and a maximum of five, with the price set from $500 for the smaller time celebrities and upwards of $100,000 for the big time celebrities, such as Richard Branson, for example.

It’s hard to see exactly what types of fans have a lazy $100,000 lying around and what you could possibly say in five minutes that would be worth $20,000 a minute (and surely if you’ve got $100,000 to spend on trying to pitch Sir Richard your business, you’re not doing too badly in the first place). However Reynolds is ready to prove that the quality of celebrities and the value of a face time chat is worth the hefty price.

The experience is split two ways for the fan and the celebrity. Sociabl is the customer app, where users sign-up and make an account to view a list of possible celebrities that are available for a five minute chat. Fans click on the profile of their idol, where they can read some more information about them and what charity they are supporting. On clicking connect, users fill out their payment details, upload an image of themselves and add in extra details like their name, country and reason for the call.

Once the call is booked in (you’re going to want to make sure your phone is fully charged, as this could be the most important and expensive call of your life), a member of the Sociabl team calls to double check the clarity of the call and go through the terms of what’s allowed and what’s inappropriate. After the run through, the next step is to wait and rehearse your best jokes, pitches or model pout, depending on whether you’re speaking with Liam Hemsworth or Rupert Murdoch.

“The call lasts for a minimum of two minutes, just to give you that security that they’re not going to hang up on you, and has a maximum of five minutes, so it does cap out. And basically at that five minute mark it gracefully fades off into white, so it’s not just a brutal cut off without warning,” explains Reynolds.

The app also has a countdown timer so you know when to slow down and wrap up the conversation without awkwardly being cut off.

Sociabl wants to encourage users and celebrities to raise awareness and funds for charity, so while the user benefits from the experience, money is simultaneously going towards a good cause.

“For us it meant that fifty cents of every dollar was going to the charities that the clients wanted to support. The fan obviously gets to see that they’re talking to their favourite idol, but also, they’re helping the idol support the cause they’re trying to raise awareness for and improve,” says Reynolds.

Reynolds explains that, with Sociabl, fans can pitch their business ideas, or sports clubs can connect with Olympians to find out their most desired tips or organise a lesson for their team. This is all based on the fact that celebrities are willing to fully engage. So far the app has lined up Aussie 74 rather small time celebrities such as former footballer Brendan Fevola, Australian comedy group Sketchshe and runner up in the Bachelorette Michael Turnbull, just to name a few.

If this group doesn’t entice you, then Reynolds hopes that his expanse into the US market will bring forth a more desirable list of celebrities. Currently Sociabl is in talks with former Black Eyed Peas rapper Will.I.Am and hopes to build his celebrity base from there.

The Sociabl app launches today after two funding rounds that raised $350,000 from both local and international venture capitalists. Reyonlds had an odd way of securing this investment – he emailed every person on BRW Rich list. He sent this rather bold message: ‘Let’s catch up for coffee and I can tell you how I’m going to make you another billion dollars,’ and from there secured an initial $50,000 in seed funding from a Melbourne VC.

After reigning in some small time celebrities, Reynolds received an offer that he said had to refuse. Three months into the journey, an investor asked the team if they would be willing to part with 50 percent of the company.

“I said ‘I’d be willing to do anything if you paid me enough money and then he said back to me, ‘well how about $2.5 million? How’s that for enough money?’ I think I couldn’t get the drool off my mouth quick enough. I could tell he was getting joy out of just throwing the number at me,” recalls Reynolds. In the end the offer was deemed to unrealistic and was turned down. Thankfully Sociabl has since been able to go one step further with less funding and a higher valuation.

Because of the high ranking of some of these celebrities Sociabl is still looking for funding, despite their pre-launch valuation claim of $9 million after the $350,000 raise. Reynolds says that the biggest cost of dealing with celebrities, especially the ones from the US, is the fact that they aren’t willing to lift a finger until cash is put upfront.

Despite paying hundreds of thousands of dollars to buy in these celebrities, Reynolds believes that his app is highly profitable with minimal risk. “I think it’s a very minimalistic cost business, everything is cash positive, basically.” That ‘cash positive’ is betting on a high demand of fans who are willing to pay.

Sociabl understands that without the big time celebrities their app may not be able to bring in the demand, which is why building up a network of high profile connections is crucial.

“We think we’re there now and we think over the coming six months that we’re only going to grow in that space, but again, once people can understand how much money is in this space I really think that there’s going to be a few hot tickets flying around,” he says.

The space for connecting celebrities with fans and supporting charities is quite large, with competitors providing a range of experiences from visiting homes and crowd funded video calls for large audiences. Sociabl hasn’t come across any competitors that are offering face time chats and believes that their model is easy to use and enables fans to connect from anywhere around the world.

“There’s not many businesses that can say I’ll give you ten thousand dollars for two minutes of your time. It’s pretty exciting and I think for us being on the forefront of talent acquisition,” says Reynolds.

In the next 12 months Sociabl hope to grow their celebrity database to work with less washed up celebrities and more of the big players. Only time will tell if the $9 million valuation will hold and the app will live up to its high demanding expectations.