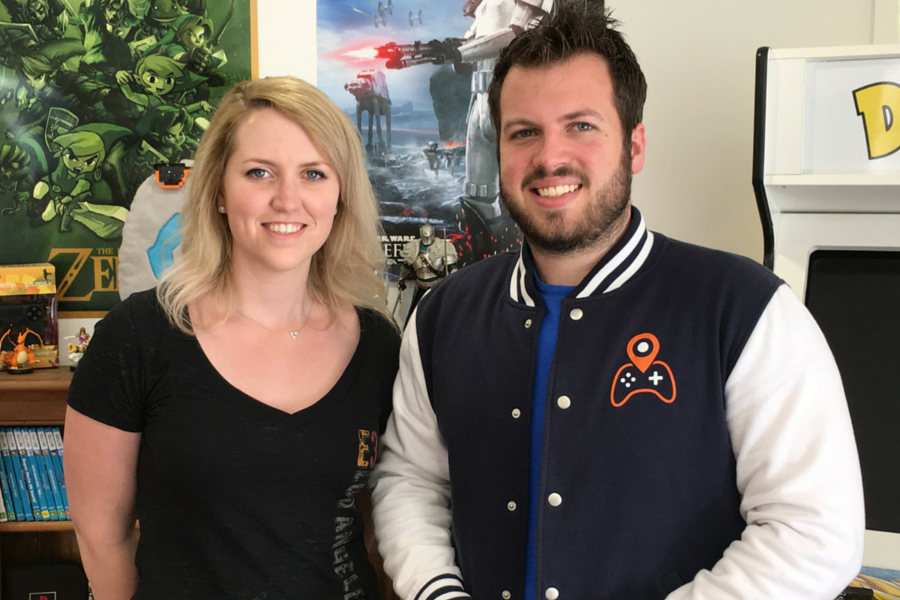 In a sports game you know your fellow team mates, their personality, looks and skill set – basically, there’s nothing they can hide from you. But in the online gaming world you’re running into that zombie fight blind. Who are your teammates? Are they robots or was it the little old lady next door that just fought a damn good battle and saved your life? It would be nice to connect to these fellow gamers and replay with those like-minded individuals. Who knows, that little old lady could be your perfect gaming match.

Leaping Tiger is an app that offers a streamlined approach to finding new gaming friends and players with similar skill sets. Cofounders Jordan Lilley and Amy Potter describe their startup as a matchmaker for gamers, where social features allow people to match and challenge opponents in their local area and form friendships beyond the dimensions of the game.

“If Foursquare and Tinder had a baby, and that baby was really into gaming, that’s Leaping Tiger,” said Potter.

Leaping Tiger was founded in New Zealand by two friends, both life-long gamers. Together they saw a lack of social experience in gaming that, at many times, failed to reach beyond profanity and your mother jokes.

“There can be a toxic culture in gaming, which we believe stems from the faceless multi-player nature of modern online games,” said Potter.

Leaping Tiger puts a face to those names and a personality to that character to enhance the online social experience for gamers. The startup is less about romantic relationships and more about skilled relationships, where you can join forces with your perfect opponent.

“We have seen a lot of social platforms move away from lengthy newsfeeds and extensive profiles, but social platforms for gamers have lagged behind. We are providing a product that is the evolution of the online social experience for gamers,” said Potter.

From a player’s perspective, Leaping Tiger is a simple process that works with a few clicks. It works off a check-in system and is based upon a players location settings. The gamer creates a profile of their gamertags, allowing other players to identify similar interests. Before a game, the player checks in to view a list of all other players in the same game, which is ordered by those who are physically closest. The gamer can send someone a play request and ask them to join, or wait to receive a request, making Leaping Tiger a fast and easy way to find a new gaming friend. Those friends can be saved on the platform, making future interactions as easy as a direct message and invite to play. Through this they could choose to converse and meet up in the real world, though Leaping Tiger focuses on the gaming aspect.

In Australia the number of gamers has doubled to 26 percent in the last few years, where consoles are used by 63 percent of households. This makes the average Australian a gamer, according to a 2014 report by The Digital Australia. That is a lot of faceless people in the online world, running side by side their virtual friends and leaving them behind in the real world.

The mockup of Leaping Tiger was pitched to thousands of gamers at a gaming convention in New Zealand in 2014. After receiving 2,000 pre-registrations in just two days the team moved ahead to the creation of their first product. The platform was launched in 2015 on iOS and web, and last month the team celebrated the first Android release.

Since the launch of their first product, Leaping Tiger has travelled by word of mouth and has become increasingly popular in the gaming community. The team wanted to prove their product’s worth to the community before undergoing an investment round.

“We decided to dip into our savings and power full steam ahead, building an app that now has thousands of users. Having proved the need for our product is real, we can now raise capital for growth,” said Potter.

The popularity of their product has revealed just how large the gap in the marketplace is. Traditionally games do have in-built matchmaking systems, however those systems are based on a randomised setting, allocating players with anonymous strangers that will never be seen again. Gaming is a social platform, but unlike other sites, gaming fails to encourage friendships and true connections.

There are so many social sites these days where the people you interact with online are friends in real life, and it’s about time gaming facilitated that same interaction. Gamers would take a bullet for their gaming partner, but in the real world wouldn’t even give them a seat on the train.

Potter and Lilley have partnered with existing gaming groups running podcasts and YouTube channels, allowing both communities to connect via Leaping Tiger. From day one they have operated in a global space, with a majority of their community located in North America.

“As a tech company from a small country, it has always made sense for us to think global from day one,” said Potter.

Over the next 12 months, Leaping Tiger are looking at monetising strategies and marketing campaigns that will help to further develop and add more value to the gaming community. The team has overcome their biggest hurdle of generating exposure on a zero budget and believe that their product has the potential to grow and expand in the gaming community, not only in New Zealand but around the world.