The average internet user accepted long ago that, by being online, they were giving up their privacy in one way or another; iTunes’ terms and conditions could have been asking for first born children, but no one ever bothered to read through and find out. But with the rise of smartphones has come a growing awareness of just how much other people can learn from our data, and users are getting wary.

MyWave, a startup headquartered in New Zealand with a development hub in Melbourne, was born out of recognition of this growing sense of unease. It has created Frank, an intelligent virtual personal assistant that allows users to control the data they share with businesses based on their preferences and buying intentions, in turn allowing them to receive products and services better targeted to them. It’s a bit like Siri on steroids.

Founder Geraldine McBride, former CEO and President of enterprise software company SAP in North America, said the platform revolves around the idea of flipping customer relationship management (CRM) to customer managed relationships (CMR), a concept pioneered by Joe Pine and Doc Searls, who are on MyWave’s advisory board.

McBride explained, “CRM is about gathering personal customer data and attempting to own it and monetise it. CRM combined with Big Data turns individuals into a pipeline, stalking them, tracking them and trying to sell them stuff without their consent. CRM is just part of a one hundred year old industrial age paradigm on Big Data digital steroids. It never really delivered on the promise of generating great experiences for customers.”

At the core of CMR is allowing users to control their own data and choose which brands and services they want.

“CMR can work with CRM and update it if needed, but customers are no longer passive participants, they are in control of their data and the experience in conjunction with the brand.”

McBride, who co-founded the company with CTO James Ladd and CXO Amy Johnson, said the idea for the technology came while she was at SAP at the height of the global financial crisis, where she saw the beginnings of a “seismic shift” in power into the hands of customers.

“I could see the beginnings of a customer-led digital revolution which would affect and disrupt almost every industry. And I could see that the rate of change would be extremely fast, accelerated by the consumerisation of devices and the impact of millennials, the social digital natives who have those devices and who want more from enterprises than just buying stuff. They want deeper experiences and a different kind of relationship with companies, built on frictionless commerce where they can be in control,” she said.

Frank is all about ease; it works through a user’s personal cloud, in which all kinds of information is stored. It then connects to different brands and services to help users shop and get through the day easier. When you buy a TV Frank can fill out and file the warranty, or order you a coffee after you wake up each morning. It can keep track of your favourite brands of shoes, for example, and alert you when there are sales in your price range. You can take a look at what’s on offer, click to buy, and Frank organises the rest. 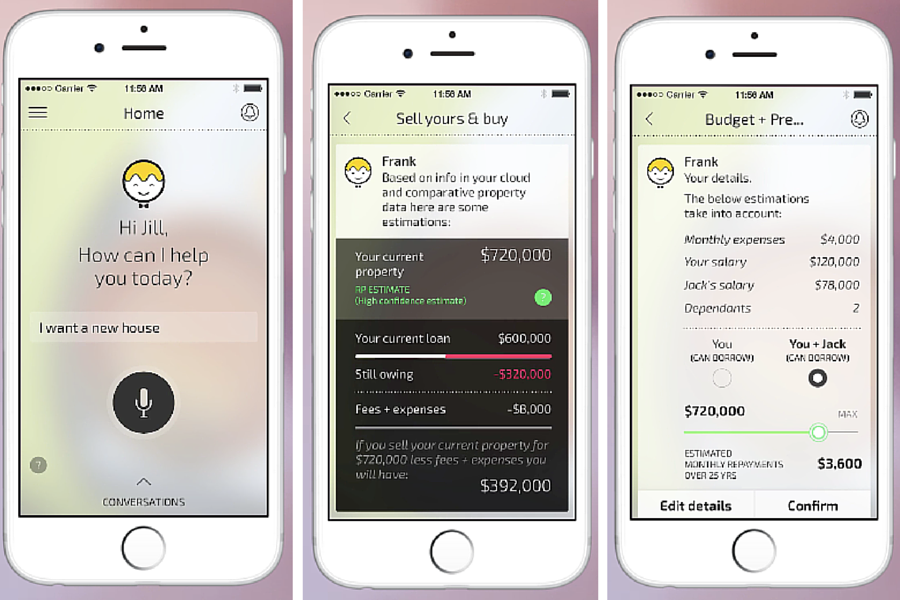 Though Frank can be licensed for specific services and brands – MyWave’s first announced client is Saveawatt, a New Zealand company that is using Frank to help customers manage their power usage – McBride said MyWave is an open platform which any product or service can be a part of.

With Gartner Group estimating that more than USD$2 billion of online shopping will be done by mobile personal assistants by 2016, the opportunity here is huge. However, McBride said one of the biggest challenges faced in the building of MyWave was simply communicating the product vision to both prospective customers and investors.

“People understood only when we were able to build and demonstrate MyWave use cases which showed Frank in action doing stuff such as finding and buying a home, managing household accounts, and small but valuable things such as finding and buying a new mountain bike or a pair of shoes. Our mantra is ‘show not tell’. Once people see Frank in action they get it and want it.”

Despite the difficulties getting the vision across at first, MyWave has raised two rounds of funding, a Series A round of NZD$2.5 million in May last year, and a Series B round of NZD$4.5 million in early October that has valued the startup at NZD$50 million.

With the startup having recently launched in the US and hired former eBay director Wally Brill as US vice president, McBride said the funding will help spur its international growth, with the launch of its UK subsidiary planned for December. It will also help the startup double the size of its Melbourne software hub.

The startup is talking with major brands around the world, who McBride said love having a direct way to work with consumers.

“My goal is to keep building market momentum at a rapid pace. Intelligent Assistants will change the way the world uses smart devices, they will replace the browser and search as we know it. We can see that change happening much faster and in a much more disruptive way than most people realise.”