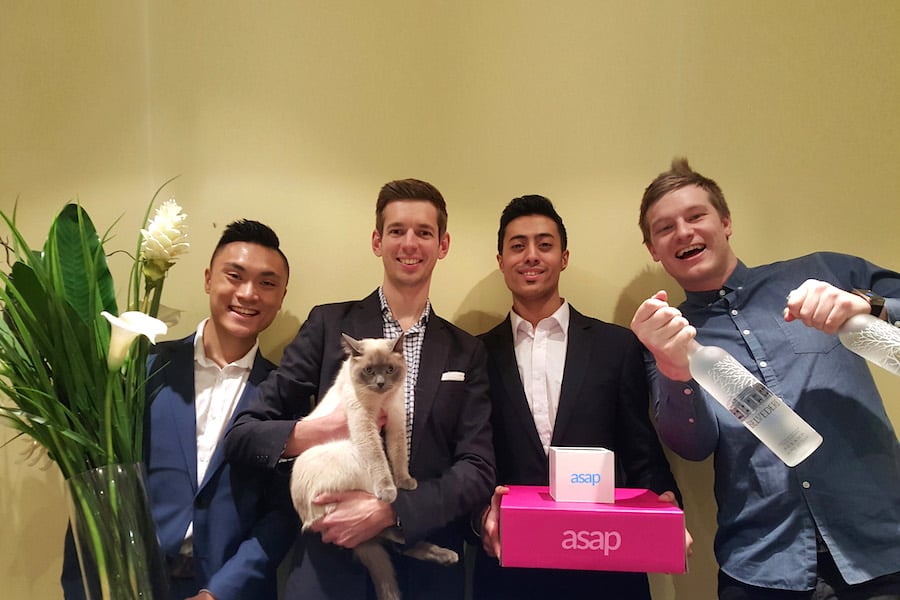 Following the viral success of Magic, an American SMS-based on-demand service that gets you whatever you want whenever you want (or as soon as possible), we’ve seen a number of Australian entrepreneurs replicate that model for the local market. One such local player is ASAP (As Soon As Possible), founded by two Sydney-based university students Dylan Samra and Kelvin Nguyen earlier this year, with Daniel Cunningham joining as a co-founder shortly after. Six months following its launch, ASAP has raised capital and merged with former rival Ketings.

Essentially, ASAP provides people with an immediate trusted personal shopper, delivery person, researcher, booker or simple errand runner to deliver what they need within 60 minutes. The transaction process behind ASAP is simple: text your demand to 0409 777 917 and the ASAP team will reply with a quote and estimated delivery time. If the customer approves, the job gets done – as long as it’s safe and legal. In the first instance, the customer will be asked to provide their address and credit card details, after which everything the customer requests is on autopilot. In terms of monetisation, ASAP charges a service fee on top of every request and this fee depends on the difficulty of the task at hand. Payments are facilitated by global payment provider Stripe.

“Everyone is time poor these days, so ASAP allows people or businesses to get items they require delivered to their doorstep in a very fast and efficient manner, whether that’s McDonalds for dinner, flowers for a friend or booking a hotel” said Samra. “ASAPers, our couriers, deliver most items within 30 minutes, with most requests only having a $9.99 fee attached.”

In a previous interview with Startup Daily, Samra admitted that Magic’s success helped “spark the flame to bring affordable personal assistance via SMS to the masses of Australia”.

“They are changing the ways consumers and businesses go through their day-to-day lives and we want to do the same for the Australian market,” Samra said.

Services like ASAP cater to time-poor and chronically impatient Australians who are willing to pay extra for convenience. Or to put a slightly more positive spin on it, what we’ve discovered recently, as evidenced by the growing popularity of on-demand devices, is that different people are willing to pay different amounts of money at different times for things that deliver them value. (Nathan Kinch, Innovation Lead at edgelabs, explains this in greater detail in his article “In the future, all products will be designed for a market of one”.)

“[T]wo people may order the exact same product from Amazon, but one of the people has a serious sense of urgency, because they need to use it tomorrow for a specific purpose, and is therefore willing to pay almost whatever it takes to get that product ASAP,” Kinch writes. “Our context is what sets us apart, drives our behaviour and controls our propensity to pay.”

At first glance, the idea that we’re just too busy to do things ourselves may seem ridiculous. Machines are already doing things for us, or at least, cutting down the time it takes to do things like washing our clothes. But sentiments towards on-demand services like WHIZZ, Uber, Swiftly, Hangover Helpers and Sherpa demonstrate there’s a need in the market – a need for fast results. We live in a culture of immediacy. We demand instant access or instant results with minimal effort.

“Customers are continuously increasing their expectations of service and how quickly they can get things. Technology, and companies like Uber, have helped spur that expectation and it’s warranted – things should be easier than they used to be,” said Samra.

“We couldn’t be more excited to be at the front end of that for on-demand delivery of food, products, services and anything else you can dream up in Australia.”

On merging with Ketings, Samra said it made more sense to join forces than compete, especially since both companies are based in Sydney and have similar aspirations.

“Given how new the market is for on-demand delivery in Australia, we saw that there were obvious synergistic benefits to merging with competitors at an early stage, and Ketings saw this too,” said Samra.

“The merge has enabled us to consolidate resources and experience to provide all of our customers with greater service.”

The joint venture will operate under the name ASAP.

Matt Keegan, formerly the co-founder of Ketings and now the co-founder of ASAP said the merger “guaranteed the future of the platform and meant that efforts could now be concentrated on what counts, the customer.”

“With the ASAP team doubling in size, all our effort will be poured into research and development and improving customer experience, as well as expanding our business to the rest of Australia”.

Based on completed customer orders – collectively, ASAP and Ketings has received around 35,000 requests – Samra believes ASAP is the second largest on-demand delivery service in Sydney, with orders growing at 30 percent month-on-month, and customers ordering at least three times within their first month of using ASAP.

“We’re hoping to increase these statistics over the coming months as we expand our operational footprint and take full advantage of the technology and synergistic benefits gained through the merger with Ketings,” said Samra.

Although Samra wasn’t able to disclose how much capital the startup raised for legal reasons, he did say it was enough to support ASAP’s expansion plans and maintain operations for the next 12 months.

The startup is currently preparing a PR stunt with a big company. However, the only details Samra was able to provide was: “What Uber has done for ice cream and kittens, we’ll be doing for something else.” The PR stunt will be executed in the coming weeks.

Other than that, ASAP will be focusing on solidifying its footprint in Sydney, then expanding into other Australian cities. Samra believes the startup is well-equipped to have a presence in all major cities within six months.

“Given the recent merge, technology developed and systems in place, we’re now in a position to scale quickly and sustainably,” said Samra.