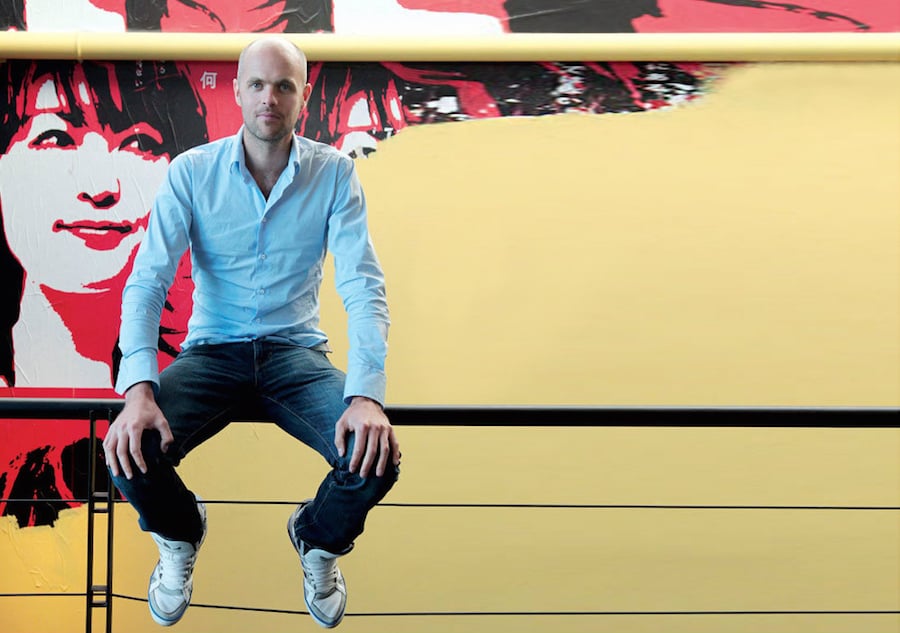 Patrick de Laive, best known for co-founding one of the world’s top tech media and event companies The Next Web (TNW), has recently unveiled Index, a business intelligence tool that tracks thousands of tech companies around the world. Chris Messina, inventor of the hashtag and a closed beta tester of Index described the tool as “what [he’d] always wanted Crunchbase to become”.

In similar spirit to Palo Alto-based startup DataFox, Index claims to do for private companies what Bloomberg and Thomson Reuters do for publicly-listed companies. It uses algorithms and natural language processing to analyse content from hundreds of A-list tech sources – like NY Times, TechCrunch, The Verge, Recode, Wall Street Journal Digital, Wired, TNW and Tech in Asia, among others – and presents the data in an understandable format so that people can find structured information on private tech companies. Upon using Index, it clearly also tracks large public companies like Google and Facebook.

Up until recently, Index was an internal project built to help TNW’s editors and journalists easily track companies they want to cover and source new story ideas. Given the volume of pitches TNW receives daily – in 2014, TNW received 50,000 pitches from 20,000 unique companies – the tool would, at the very least, help journalists stay on top of everything under one digital umbrella. de Laive also notes that it’s difficult to keep track of the tech industry when just as many tech companies close their doors as they open every month.

“With so many startups out there and so much publicly available information on social media and in the tech press, I wanted to build a product that helps our editors in scouting startups that do particularly well, are remarkable and show traction,” de Laive tells Startup Daily.

Index’s aim is to make tools for gathering information on tech companies “previously only available for Wall street and the Fortune 500 companies – for the ‘Main Street’.” de Laive insists that, before Index, there was no great way of tracking everything that happens in tech, at least not for free or at an affordable price for the general public.

Right before its public beta launch, de Laive and his team decided to make Index an entity of its own, rather than a subsidiary of TNW.

“Five months in, with a dedicated core team, we came to the conclusion that what we were building deserved more than just being an internal tool, so we started to work on what eventually became Index, the easiest (and most gorgeous) way to track tech,” says de Laive.

The current version of Index is free to use with or without an account. However, by having an account, users can customise their feed to contain stories, funding rounds and acquisition events about the companies and locations they want to monitor.

On the home page, users get two information streams – one that’s personalised based on the companies and locations users are following and global trending news. 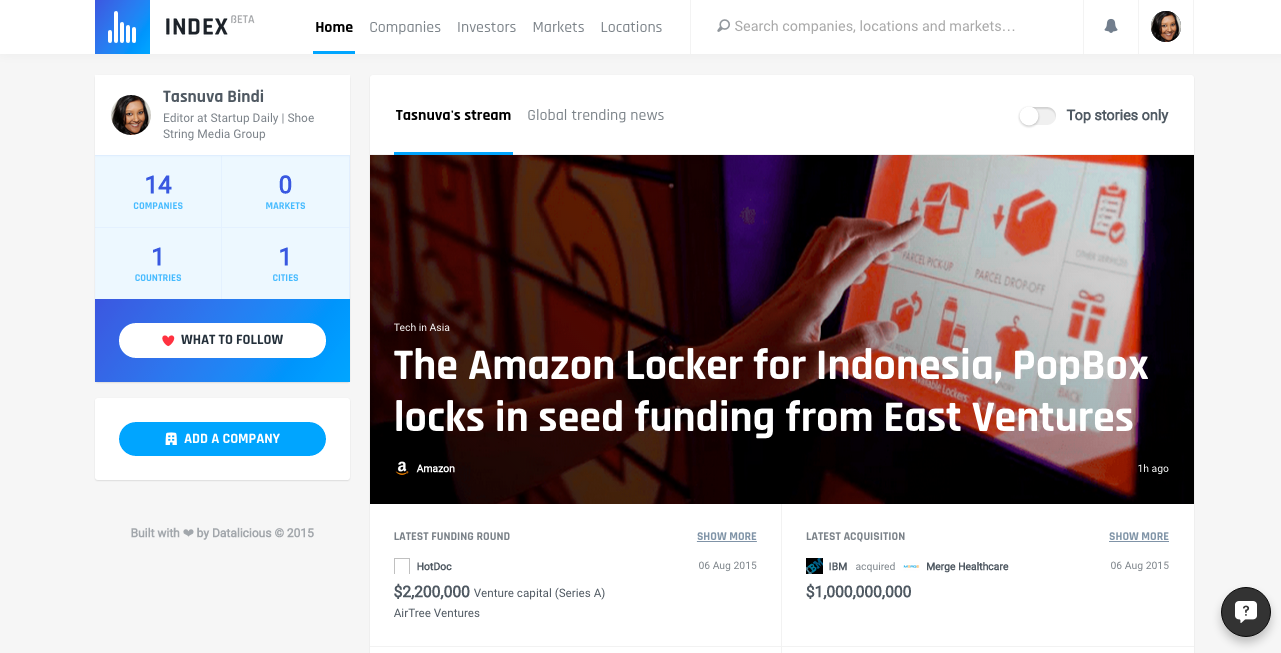 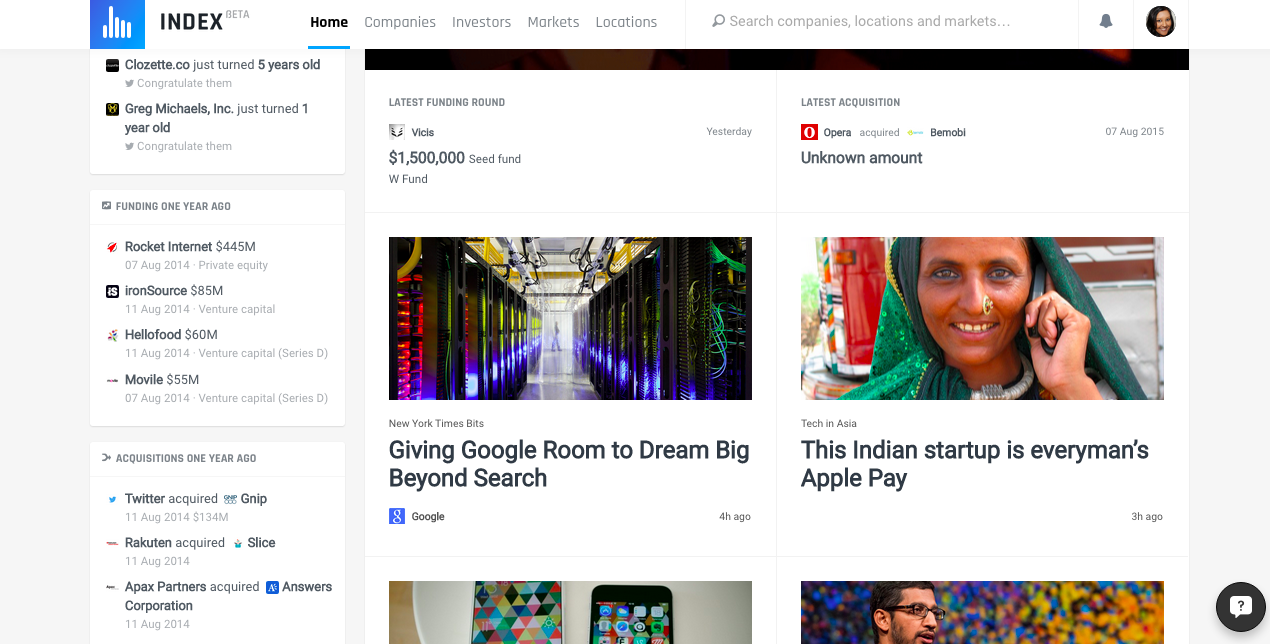 There are additional pages that allow users to look up details on Companies, Investors, Markets and Locations. On the Companies page, users can find out five key pieces of information about companies: the country they’re headquartered in, the year in which they were founded, total funding raised, number of employees, and social media followers. On the Investors page, users can find out, for instance, where a VC firm is based (city and country), how many investments have been made by the firm, and total amount raised since inception. Those who are interested in, say, education technology (EdTech), can go to the Markets page and click on ‘education’ to discover all that is happening in EdTech. The locations page is similar to the Markets page in that it allows users to find out what’s happening in particular locations.

Tools like Index, however, can only gather publicly available technology-related content. Unless companies have publicly released information – e.g. announced a funding round – Index cannot extract data points, add them to its database and match them to tech companies globally. Private companies that like to stay in stealth mode or don’t get press coverage won’t appear on Index’s personalised or global news streams. de Laive did state though that Index aims to track companies that are generating traction – specifically, companies that are being featured in reputable publications.

“Basically we track the most important tech news outlets in the world and filter out data points from the content by analysing what the article is about and how fast it is spreading on social media to determine its importance,” says de Laive.

In locations like Australia and New Zealand, as more and more respected publications seek to cover startups, and as startups receive mainstream press coverage, the value of Index will also increase. Having used Index for the past month, it’s clear the Australian and New Zealand (ANZ) news streams are growing quite rapidly, so it will be interesting to see how Index influences global and local perceptions of the ANZ tech ecosystem.

Apart from Crunchbase, Index has been compared to LinkedIn’s newsfeed and TechMeme. de Laive understands why those comparisons have been made and admits that it combines functionalities of all three, however feels there is something more powerful about Index – namely, its engine.

“Users of the first hour have compared it to CrunchBase, Linkedin newsfeed and TechMeme, which already explains that we’re not just a startup database. Index has a bit of all, data on tech companies like CrunchBase, a feed of the hottest news on tech like TechMeme and a dynamically updated personalised feed based on your interests,” de Laive says.

“What makes Index so powerful is the engine behind it that is analysing articles and extracts data combined with user generated info from the companies that are on Index. So unlike Crunchbase for example, where anybody can edit any company profile, on Index only people who work at the tech companies can update their company profile. Once you have set up a company profile on Index, it takes care of 90 percent of the further updates through its engine.”

de Laive says the current version of Index will remain free, but the company will likely introduce a premium version in the upcoming months that will offer more information on companies than what is currently shown. The company’s intention is to continue testing the market and improving the product before deciding on and executing a business model.

“[We] have a lot more data than we’re showing right now which could be the base for the premium version of Index. At the moment we’re figuring out which model to go after first, but ideally we would work another four to seven months on Index before introducing a business model,” said de Laive.

“We’re constantly working on improving our core engine which turns data into content and matches it with the right companies. We want to be able to offer the best stream of relevant tech content throughout the web to our users, this means that we also want to add content about the markets you care about. This is a very hard task to tackle but the first internal results of our approach are very promising.”

Index has been bootstrapped to date, though de Laive is open to the prospect of raising funds at a later stage to double the size of the team – Index currently has five staff – and speed up development. de Laive admits, though, that raising funds takes time and he’d rather that time be used to improve the product.

By the end of the year, the goal is to have Index tracking 100,000 active tech companies around the world. The two most requested add-ons from Index’s existing users is an API and mobile app, which de Laive admits are “very high on [their] wish list”.

Index is certainly promising, not only because of the track record of people behind the tech, but also because investors, entrepreneurs and media are looking for ways to monitor companies and the global tech industry as a whole. Though there are other offerings in the market like DataFox, CB Insights, Mattermark and Pitchbook, what will set the premium version of Index apart is its accessibility, pricing and UI/UX. The free version will grow organically – it’s already been highly praised by industry stakeholders – but the premium version is the real money maker and has the potential to be genuinely impactful.

“We’ll continue in our quest to make the tech scene more transparent and easier to navigate for everybody,” de Laive concluded.