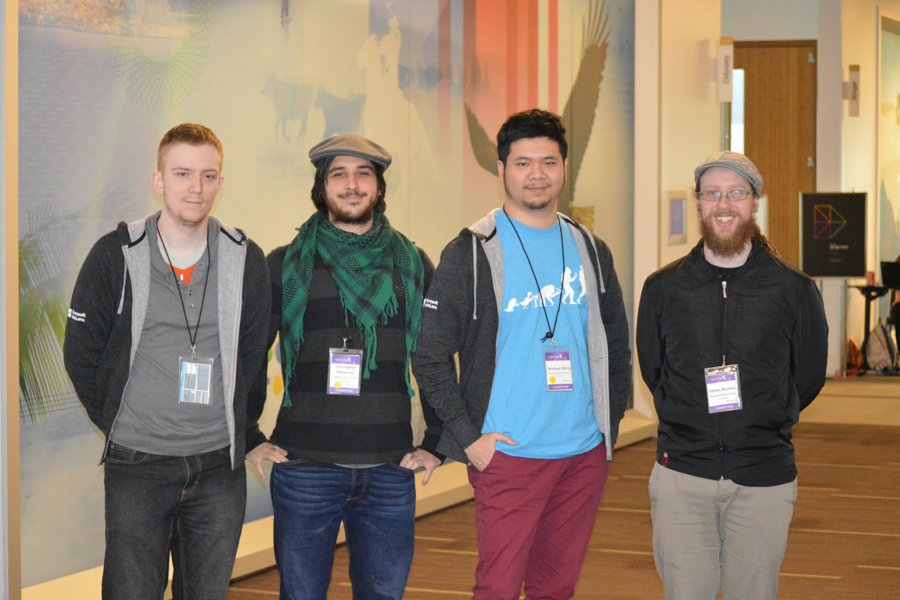 As the old saying goes, you can’t really understand someone until you walk a mile in their shoes. Opaque Multimedia has spun that saying out into a virtual reality experience that helps carers and families understand what it’s like to live with dementia.

Swinburne University students Chris MacKenzie, James Bonner, Liam McGuire, and Norman Wang were first approached by Alzheimer’s Australia Victoria in 2012 to use gamification and virtual reality to develop a system that could help carers provide a higher level of care to patients living with dementia by showing them what life was like with the disease. The result was the Virtual Dementia Experience, which recently won the Citizenship category at the Microsoft Imagine Cup after taking out second place last year.

The first iteration of the Virtual Dementia Experience was an installation at the Perc Walkley Dementia Learning Centre in Melbourne. A projector wall would fill one’s field of vision, with colour, light, and surround sound being used to create the experience.

Opaque Multimedia’s James Bonner explained that a projector was “the best way to get a virtual reality experience in 2012.” The virtual reality field has taken giant leaps in the last few years, and the Virtual Dementia Experience is now conducted through a headset.

“It meant we were able to take the massive installation, which would take $50,000 to replicate, and bring it down to a $2000 computer that can be put in the back of a station wagon and driven out to a nursing home. Staff can be trained in a matter of hours, rather than sending them all the way down to Melbourne for several days of training,” Bonner said.

The installation proved popular; Bonner said it essentially paid its own costs and as well as for new developments, the most significant of which was adapting the experience into the Oculus Rift headset.

“It uses a combination of the headset and gaming technology to completely expand your normal senses so you can’t help but be tricked into thinking you’re in an entirely different place and in a different body,” Bonner explained.

“You can go through a morning routine as a healthy person, brushing your teeth, having a shower, putting your clothes on, and then go through the same routine as someone who has dementia. The educator can control exactly which symptoms of dementia – hallucinations, memory loss, eyesight trouble or auditory problems – are associated with your experience, so you go through the same set of activities and we really try to show how difficult the simple things can be for someone who has dementia and its associated effects.”

The experience then takes the user through the routine again, this time showing how simple things in the environment can be changed or adapted to make things more accommodating for people living with dementia. For example, having doors and walls painted the same colour can make it difficult for people with dementia to identify the entry to a room.

As well as helping carers and families, another of the team’s goals is to have politicians go through the experience in order to create more informed policies. They’ve had promising results; Melbourne’s Lord Mayor took part last year, and said he’d work towards making Melbourne the world’s most dementia-friendly city, while the State of California is interested in incorporating the experience into its mandatory carers training regime.

With $50,000 in prize money from the Imagine Cup to put towards further development, Opaque Multimedia is considering adapting the system for other disorders that have a visual or auditory impact, such as multiple sclerosis or schizophrenia.

The main goal now is to distribute the Virtual Dementia Experience around the world. Bonner said several partners are interested, while the Imagine Cup also provided opportunities to meet with potential investors.