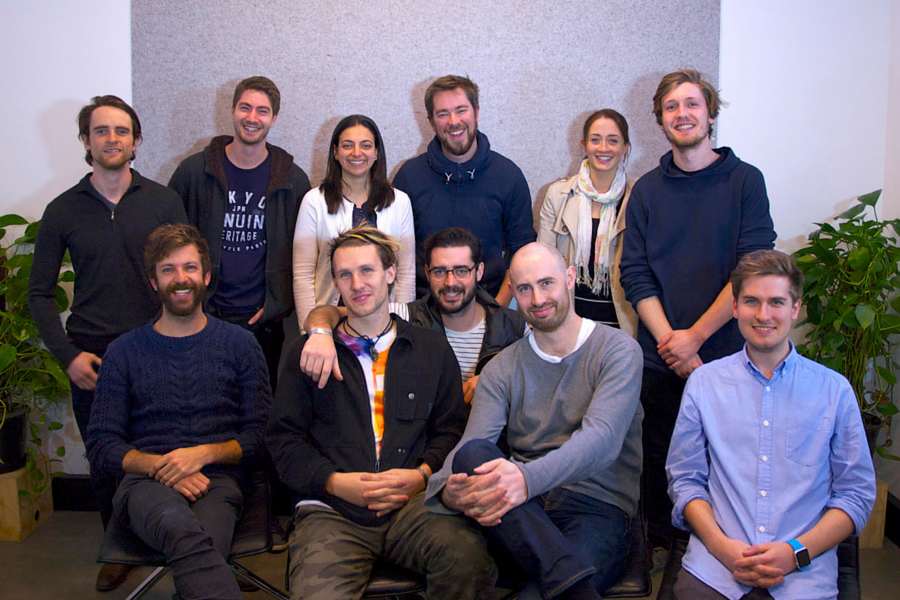 After another busy week, a number of Australian startups have raised capital. iSeekplant raised $1 million, while Beat the Q Posse Group raised $5 million and HotDocs secured $2.2 million in a round led by AirTree Ventures. Also this week, Adidas acquired Austrian fitness startup Runtastic, and IBM acquired Merge Healthcare for $1 billion.

Austrian fitness startup Runtastic, which has over 140 million downloads and 70 million registered users, has been acquired by Adidas for $240 million. Florian Gschwandtner, co-founder and CEO of Runtastic, explained in a blog post that Runtastic will continue to operate as its own entity within the Adidas Group, keeping its offices in Austria and San Francisco. “We will continue deliver further optimizations, unique content and a highly-anticipated new app by the end of the year,” he added.

FinTech services company Affirm has acquired the talent behind LendLayer, a startup offering student loans for coding bootcamps. The acquisition allows Affirm, which offers online shoppers monthly loan repayment options, to gain a foothold in the education space. Affirm’s CEO Max Levchin said in a statement, “Our core value is bringing transparency back to financial services. We believe lending to bootcamp students is the single best way to help them invest in themselves, improve their quality of life, and become successful contributors to the new economy.”

IBM is set to buy medical imaging company Merge Healthcare for $1 billion. The company will be woven into Watson Health, IBM’s health analytics unit, which is powered by the Watson computer.

WeWork, a network of startup coworking spaces and communities, has acquired Case, a building information consultancy. The two companies have worked together in the past. Case’s founders explained in a blog post that the acquisition will see “the team will focus completely on expanding and enhancing the already impressive physical and digital platform that enables WeWork members to create incredible things.”

Grocery delivery startup Instacart has acquired Wedding Party, an app which makes it easier for friends and family to capture and share photos and videos at a wedding. The deal is being termed an ‘acqui-hire’, with Instacart interested in Wedding Party’s team of engineers. Instacart’s vice president of communications told The Business Times that Wedding Party is good at creating custom experiences, which is Instacart’s primary focus.

Chinese internet service portal Tencent has signalled its intentions to buy all remaining shares in online travel agent Elong. Tencent has offered $18 per American depository share; it already owns shares that give it a 15 percent voting stake in the company.

Microsoft has acquired Incent Games, the maker and owner of FantasySalesTeam, a fantasy sports-like sales gamification platform that looks to boost productivity by driving collaboration and competition in sales teams. FantasySalesTeam will be integrated into Microsoft’s Dynamic CRM offering.

Supplyframe, the owner of hacker blog Hackaday, has acquired Tindie, a marketplace for hardware creators to sell their products. Supplyframe CTO Aleksandar Bradic wrote in a blog post that the platform fills the gap between prototype and initial production. He wrote, “Crowdfunding provides access to capital for some (and access to laughs for others), but it’s not always the way to go. You might not be ready to quit your day job or take on a project full-time. You might be working on rev1 of the project and want to try the “lean manufacturing” thing. Or maybe you’re building something for your own purposes and have some extras lying around. Tindie is a platform that has helped launch many such projects, and we’re incredibly lucky to have it be a part of Hackaday.”

HotDoc raises $2.2 million Series A round

Doctor appointment booking and software platform HotDoc has closed a $2.2 million Series A round, led by AirTree Ventures with participation from NCN Investments. The startup has signed over 3,500 GPs, having secured multi-year contracts with corporate partners Sonic Healthcare, Healthscope and ZedMed. The funding will be used to boost marketing efforts and make new hires, with HotDoc expected to double its team over the next year.

Australian plant hire startup iSeekplant, which allows companies in the mining and construction industries to search for and hire machinery, has raised $1 million from angel investors. iSeekplant reports having 70,000 monthly users, with more than 50,000 machines for hire in its database. The funding will allow the startup to scale and add to its current offering.

Rebagg, a platform that sources and resells second-hand designer handbags online, has raised $4 million in seed funding from investors including General Catalyst, Metamorphic Ventures, Crosslink Capital, and Founder Collective. The funding will go towards expanding its service across the United States and adding to its team.

Tintri, a California startup which provides storage solutions for virtual products, has closed a $125 million Series F round led by Silver Lake Kraftwerk, with participation from existing investors Insight Venture Partners, Lightspeed Ventures, Menlo Ventures, and NEA, bringing the total raised by the startup to date to $260 million. The funding will go towards driving adoption of the company’s products globally. Tintri has also hinted that it will be looking to IPO in 2016.

European startup SavingGlobal, which aims to create a single market for financial services across Europe by allowing users to access the best deposit rates from banks around the continent, has closed a €20 million Series B round led by Palo Alto-based Ribbit Capital and Index Ventures, with participation from Yuri Milner and Tom Stafford. This brings the total raised by the startup to date to €30 million.

Jibo, the startup behind the ‘social robot for the home’, has raised $11 million in Series A extension financing from investors around Asia, including Acer, Dentsu Ventures, and LG Uplus. It comes after Jibo raised a $23 million Series A round in January. The company stated that this extension round will be used to accelerate Jibo operations, product enhancements, partner content integrations, and Jibo’s market introduction.

Indian doctor booking startup Practo has raised $90 million from investors including China’s Tencent Holdings, Yuri Milner, and Google Capital. According to TechCrunch, Practo is set to launch into six new countries soon. As well as India, it is already active in Singapore and the Philippines, and aims to be in 100 cities around India and 10 international markets around Southeast Asia, Latin America, the Middle East, and Eastern Europe by early next year.

New Orleans social dining startup Dinner Lab, which gives members access to private dinner parties it hosts around their city, has raised $7 million, with $5.3 million of that venture funding and $1.7 million crowdfunded from its subscribers. The venture funding was led by James River Capital, with participating from all existing investors. It will be used to expand into new US markets.

Leanplum raises $11.6 million Series B round

Leanplum, a platform helping mobile developers and marketers engage users through things like A/B testing, UI optimisation, and personalised triggers, has raised a $11.6 million Series B round led by Kleiner Perkins. The funding will be used to expand its team.

Fastly, a content delivery network, has announced that it has raised $75 million in Series D funding led by Iconiq Capital, with participating from existing investors Amplify Partners, August Capital, Battery Ventures, IDG Ventures, and O’Reilly AlphaTech Ventures. Fastly will use the funds to expand its global reach, and further its ecommerce and security expansion.

Work management solutions startup Workfront has raised a $33 million Series E round led by JMI Equity. The funding will be used to support the sales, marketing, and product strategies the company has defined.

Amplitude raises $9 million Series A round

Amplitude, a mobile analytics startup, has closed a $9 million Series A round led by Benchmark Capital, with participation from existing investors including Quest Venture Partners, Data Collective, Merus Capital, Charlie Cheever, and Dave Morin. As well as the funding, the startup announced that it will be offering companies tracking less than 10,000 monthly events its flagship service for free.

Solar panel installation and distribution startup Bright, which launched out of Y Combinator, has raised $4 million in seed funding to help it provide Mexican homes with solar power. The funding comes from investors including First Round Capital, Felicis Ventures, Max Levchin, Patrick Collison, and a number of YC partners.

Tokyo startup Ptmind, which has created a platform that analyses user behaviour on websites, has announced that it has raised $9 million in pre-Series A financing from CAC Capital, which will be used for product development and new hires.

Cloud security company Zscaler has raised $100 million at a valuation of $1 billion in a Series B funding round led by TPG. Zscaler CEO Jay Chaudhry said in a statement, “The investment and partnership from TPG and the global relationships and experience they provide will enable us to accelerate investment in our technology, grow our customer base and aggressively scale our business to meet growing demand.”

Riffsy raises $10 million Series A round

GIF keyboard maker Riffsy has raised a $10 million Series A round led by Menlo Ventures, with participation from previous investor Redpoint Ventures, Cowboy Ventures, and Signia Venture Partners. The startup explained in a statement that the funding will be used to support the growth of its mobile products and “building GIFs and video into the daily language of every mobile user.”

EduTech startup Panorama, which allows schools and school districts to collect and analyse student feedback, has announced that it has raised a $12 million Series A round from investors including with Owl Ventures and Spark Capital. Jed Smith, co-founder of Owl Ventures, and Andrew Parker, general partner at Spark Capital, have joined Panorama’s board. The funding will be used to expand the platform’s capabilities and expand the Panorama team.

Berlin startup Zeotap, which helps telecos activate and monetise their data, announced that it has raised $6.4 million in Series A funding from Capnamic Ventures, Iris Capital, prominent angels and existing investors. The funding will go towards developing its platform and expanding its US presence, as well new hires for its engineering team in India.