It’s easy to watch the news stories about people drowning in rivers or at the beach each summer and think it will never happen to you because you’re a strong swimmer, but the truth is that accidents can happen to strong swimmers too. The World Health Organisation estimates that over 372,000 drowning deaths occur each year, with people often getting caught in rips, developing cramps, or falling overboard from a boat or swimming out too far and getting stuck.

Spurred on by the drowning death of a friend, Californian entrepreneur Tom Agapiades has come up with a device to reduce the risk of drowning during any recreational water activity. Kingii is an airbag-like device worn on the wrist that inflates and pulls the wearer up to safety when activated. It’s aptly named after the Kingii frilled neck lizard, whose frill expands when it’s in trouble.

The Kingii works through the release of an internal cartridge of carbon dioxide (CO2), which inflates the bag within one second when the wearer pulls the lever. The bright orange bag then acts as a floatation device that can be held onto and attract attention. The bag is also attached to a whistle, while the wrist strap is fitted with a compass to help the wearer find their way back to where they need to be. The device is reusable; the bag can be folded back into the retainer, and a new CO2 cartridge fitted. It’s also one size fits all. Kingii, which weighs 140 grams, features an adjustable wrist strap that can fit anyone from the ages of six and up, and can support weights of up to 124 kilograms.

The device has been in development since March last year, having been funded primarily by the Kingii team before finding investment from Business Angels. Extensive trials were conducted among surfers, lifeguards, children, and parents, with Michael Brendle, director of Kingii’s European operations, explaining that finding the right materials that could meet the team’s expectations was difficult – and the expectations were high. After all, having a working product could literally be a matter of life and death. 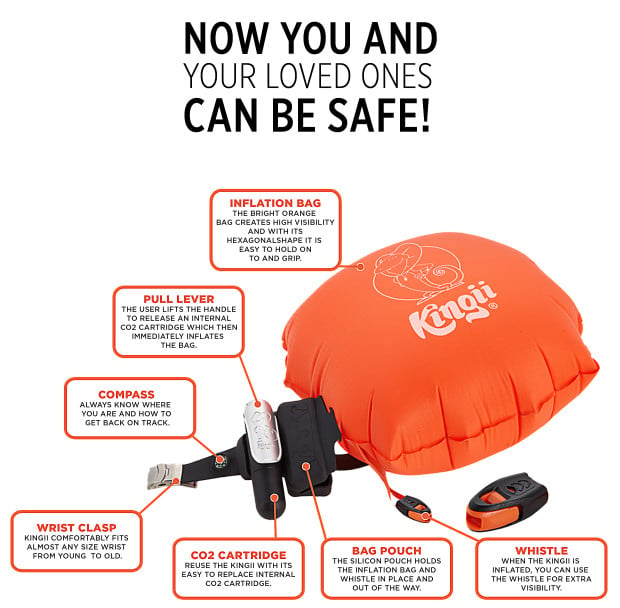 “Finding a design that was light, slim, convenient and comfortable but also ensures safety was quite tricky,” he said.

Slim and comfortable are key features in this area, too. Once we graduate from floaties as kids, the only real tool available to help older swimmers stay safe in the water is the lifejacket. However, the problems with the lifejacket are twofold: they aren’t really for pool or beach use, and people don’t like using them when they should. In fact, most drowning victims in boating accidents had life jackets available to wear but chose not to. Because they are convinced nothing will happen to them, most people will take the odds and forgo the lifejacket on a boat.

The performance of Kingii on Indiegogo suggests that people like the idea of wearing it. Kingii launched on Indiegogo with a funding goal of $65,000. With two days left on its campaign, it’s more than 850 percent funded, having raised almost $560,000 from a thousand backers.

The beauty of the product from a business standpoint is that it’s not just a one time buy. The wrist device itself can be sold separately from the carbon dioxide cylinders, which must be replaced in order to reuse the bag. One device and two CO2 cylinders is going for $79, with a ‘small recharge’ package of two extra cylinders costing $6.

The Kingii team is currently in talks for strategic partnerships to help get the product into retail stores.

Previous article Has Wellington created the most feminist tech ecosystem in the world?
Next article Vinomofo gets mainstream recognition with Online Retailer of the Year award
Via Other
Tags Californiadrowningfeaturedkingiistartupstom agapiadesUSAwater safety